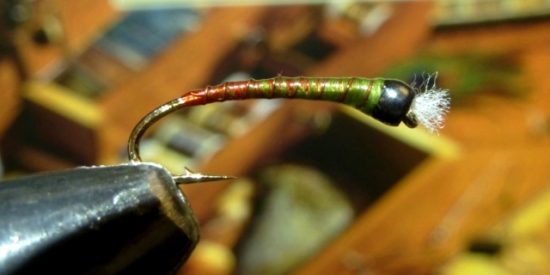 Like it’s predecessor, the Bleeding Limey, the Screaming Viking (Green Red Butt Chironomid Pupa Fly) was borne out of necessity. The original was needed so that those little green red butt cronies would never get the best of us again! And truth be told it did, and continues to do, a great job in that respect! The problem, if you can really call it that, is that the acetate floss material used in its construction makes it a bit tough to keep smaller patterns slim and in proportion to the naturals that we want to imitate. Is it doable? Yes absolutely! It just takes enough more time and effort that it got me thinking if I could accomplish the same thing in a different way. Enter the Screaming Viking …

Having already used a thread blending technique in the development of the Black & Silver Red Butt Chironomid Fly, I thought that would be the best place to start with the Screaming Viking. The red butt was the easy part as I was pretty sure the UTC Ultra 70 Red that worked for the Black & Silver Red Butt would certainly work just as well for the Screaming Viking. The green was a bit harder to figure out because the original Bleeding Limey was, well, lime … but the lime thread I had was, well, too lime … if that makes any sense. The other problem was that just when I thought I had it all figured out the krazy glue kept changing the thread shade when applied basically sending back to the drawing board. Long story short(er) I eventually determined (stumbled upon) the fact that Uni 8/0 Olive was the ticket!

As you can see from the image above the result was, at least in my mind, very successful! And as a bonus all the trial and error thread options led me to the development of the “Mud & Blood”, with a very subtle yet at times (to the fish) seemingly enough of a difference to make a big impact on my fishing! But I digress …

So at this point I needed a name, which usually takes me forever to come up with, but for some reason this time came easy … the “Bruised Olive” obviously! So that’s what it was called for a couple of years. Then one day while binge watching Cheers (If you’re too young to remember Cheers don’t tell me I already feel old lol) and the name morphed into  the “Bruised Cucumber”. Well that one was just awkward so even though it doesn’t describe any of the fly’s characteristics I went with “Screaming Viking” instead. Here’s the Cheers clip that did the trick …