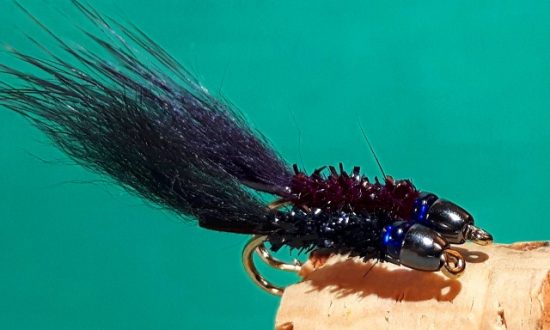 It was about five years ago that I added the “2X” length hook style to my existing “scud” hook style chironomid pupae arsenal. I arrived at the Togen Curved Nymph hook through a process of trial and error, and all the time and frustration that usually goes with it. Regardless, I’m glad of how it all played out as it led me to prove out this well built and extremely versatile fly tying/fly fishing hook.

The journey began with the typical small talk between two fly fishermen while we were both doing quite well, ok we were smashing them, on a local still water lake in the beautiful BC Interior. When things are going well for everyone the veil of secrecy seems to evaporate and it wasn’t long before we were comparing flies. The fish I had pumped were stuffed with dark #14(ish) chironomid pupae so I had made the choice, obviously correctly, to go with the Little Black N Red (#14). At that time, despite growing experiences with them opening up at inopportune times, I still had a few cronies in my fly box that were tied on the Mustad C49S … and that’s what I was using that day. Unsurprisingly my new found fishing buddy was also using a dark cronie, brown and copper if I remember correctly, but what was new to me was the fact that it was tied on a longer shank style hook … a 2X long. The conversation continued, and although it didn’t seem to matter that particular day, the fellow informed me that there were certainly days where the 2X outperformed the standard 1X and even some days where it made ALL the difference. And just like that the decision was made that I needed to replicate all my cronie patterns on 2x long hooks just in case I hit one of those days! And based on the fact that the 2x hook of the day that buddy was using was the Tiemco 2302, that would be my starting point.

So, remember that time & frustration I was telling you about? Well, the rest of this story takes place over about three years and may or may not be in the right order as the small details are fuzzy. The big details however, like that time I lost that double digit bow right at the boat when my 2302 broke, is crystal clear and seems like it happen only yesterday lol!  Then there was the “Hopper”, the “C53S”, the “Natural Bend”, and a plethora of others,  maybe in that order maybe not, but regardless each resulting in way too much of the same thing at the worse possible time. They say a picture is worth a thousand words so I’ll save myself the further pain of recounting the nightmares and just show you this ……. 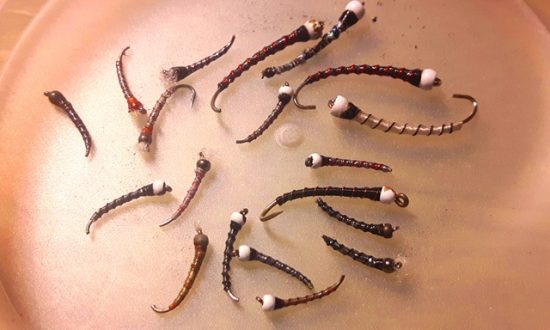 … and that’s just the ones I remained calm enough to keep lol! Most of them were sent to a watery grave!

And then, when I was just about to give up and go back to the good old reliable Togen Scud hook, which by the way I never, ever, had a problem with so in reality I could have just stuck with it and never had to go through any of this (palm slap), someone told me about the Daiichi 1760.

Things went a lot smoother after that. The 1760’s were a bit harder on the wallet but they were certainly holding their own on each and every trout that they went through. Alright! Done! Nothing could possibly go wrong now! Until, that year when everyone everywhere was out of stock! Not a 1760 to be found in BC, in Canada, in North America, overseas, and no one knowing when they might be available again! Fast forward to today and we had the same thing happen again this year! 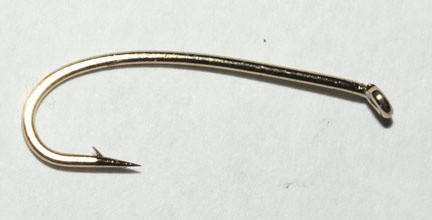 If I remember the timeline correctly we are now about two years back from today, so that would be two full years fishing with the Togen Curved Nymph hook. Wanna know how many I’ve broken? Let’s just put it this way … if I had a camera available to take a picture of every one of them that broke on me, I still wouldn’t be able to post a picture! That’s right  … NONE!

So at this point can I say that the Togen Curved Nymph hook is the best 2X long style hook out there? Well, no. First of all I haven’t tried them all, and secondly that 1760 is definitely a force to be reckoned with. So with that I thought I’d do a little experiment …….

As I mention in the video, the fact that the Togen Curve Nymph hook outperformed the Daiichi 1760 in this one very unscientific test, really doesn’t mean much. If I tested 10 hooks each, with some way of ensuring equal force and distance applied to them every time, then I could say that the results would be be at least more reliable. But in all honesty I really don’t want to waste that many hooks and I think, as lame as it was, the test was enough to tell me that the two hooks are pretty close in strength. Couple that with the fact that I’ve yet to break either brand hook in the field, and I think that it’s fair to say that the Togen Curved Nymph hook is a winner.

For those of you that have been fly fishing the BC Interior for any amount of time you may have run into Tom Lam, or at least read his posts on the fly fishing forums, or maybe even sat through one of his chironomid fly fishing courses. In his quest for a thin but strong chironomid fly hook Tom independently stumbled across the Togens Curved Nymph and did some of his own testing, which I am posting with permission below 🙂

I wanted to find out unscientifically the amount of force needed to open up a small chironomid hook (hopper style) # 16. I used a scale and a stainless steel wire pulling at 90 degrees to the hook shank at the eye. After repeated attempts I have come to the following readings …

Perhaps this will give people a guide to what hook they want to use, bearing in mind that the thin wire hooks tie the best and effective chironomids.

The shape of the Togen Curved Nymph hook also makes it very versatile. Since it’s successful debut in the chironomid pupae arena,  I have also experimented with it successfully to cover the larvae stages of both chironomid and chaoborus, as well as used it in many different nymph fly patterns such as mayfly nymphs, damselfly nymphs and dragonfly nymphs. My latest prototype with it is for what I think will be a killer cased caddis larvae pattern and, although I have not attempted it yet, I’m sure it will work fine for caddis pupae as well. 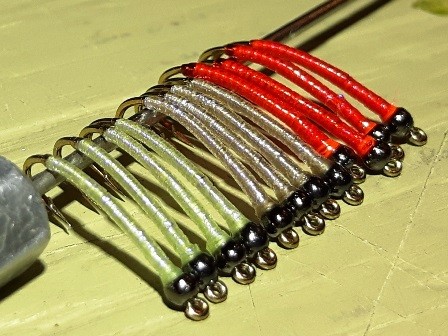 Throw in all my leeches … mini’s, micro’s and full sizers … and I think you get the picture on just how flexible the Togen Curved Nymph hook can be.

And as an added bonus, yes it still get’s better, the Togen Curve Nymph Hook is about 2.5 times more economical than any of the leading brands … ie) Tiemco, Daiichi, Mustad, etc.! Please don’t take this in any way that we are trying to bash brands here as that is the last thing we want to do. Just pointing out the fact that at their current price of $9.99 per 100 hooks, and lets even say just  “similar” quality performance to the best other like shaped hook out there that I could find, the Togen Curved Nymph hook seems like a steal!

So that’s it folks, the straight goods on the Togen Curved Nymph hook. If you want to get your hands on some to test out for yourself you can find them here; and don’t forget promo code “flyguys” for 10% off! 😉

... flyguys chief webhead, when not fishing ;)
View all posts by BCFlyguys →
This entry was posted in Product Reviews. Bookmark the permalink.