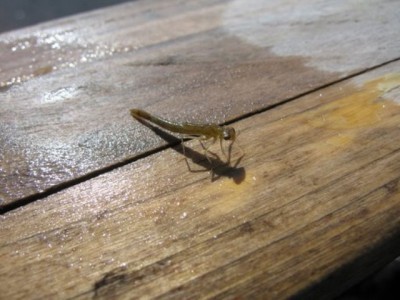 Damselflies belong to the “Odonata” insect order which contains over 650 different species worldwide. Damselflies are similar to dragonflies, but the adults can be differentiated by the fact that the wings of most damselflies are held along, and parallel to, the body when at rest. Damselflies are also usually smaller, weaker fliers than dragonflies, and their eyes are separated. The life cycle of the damsel includes egg, larva (nymph) and adult stages varying in length from 1 to 4 years.

Behavior of the Nymph (Larva):

The nymph is the longest stage of the Damselfly’s life cycle. They live, eat and grow amongst the weeds in 4 to 24 feet of water and undergo several instars or molts during their development. By maturity they grow to approximatley 35 mm in length.

The Damselfly nymph is easily identified by its long thin body, distinct wing case, and, like the Dargonfly, its well developed jaw which it uses to grasp unsuspecting prey while stalking through the vegetation in which it lives. Favourite food sources include shrimp, mayfly nymphs, chironomid (both larvae & pupae) and zooplankton. Nymphal colouration typically resembles the colour of their habitat – a trait which greatly helps them evade predators such as trout. 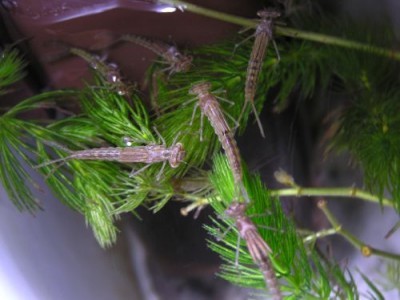 For several days leading up to their emergence Damselfly nymphs make many false starts beginning to ascend then settling back down to the bottom. They emerge usually in large numbers, swimming slowly upwards with pauses until they reach the surface. Near the surface they level out and swim towards shore within the top 3 feet of water. Near shore they climb out of the water on any protruding object where they anchor themselves and hatch into the adult.

Behavior of the Adult Damselfly:

After their hatch, the new adult Damselfly will spend the next few hours completing its development and “drying its wings” before flying away from the water. It spends from one week to one month feeding heavily on smaller insects while it sexually matures in preparation to mate. When the time is right the courtship begins and eventually they pair and can be seen attached end to end. Egg laying then typically occurs on protruding vegetation around the waters edge and the life cycle has come full circle.

Fly Fishing Damselfly | When to Fish:
Damselfly nymphs are a prime food source of stillwater trout. They are always present in lakes and can therefore be fished year round. In the absence of a hatch it can be typically found along the bottom of the lake, preferring the cover of weed beds.

The damsel nymph becomes most available to trout prior to and during emergence, which is usually around midday from mid spring to mid summer. Nymphs swimming just under the water surface towards shore and climbing any protruding objects indicate a hatch in progress. Trout will begin feeding on the false starts of the nymphs near the bottom a week or so prior to emergence even though no surface sign will be evident – consider time of year and look for trout actively feeding near the bottom. As the hatch progresses trout will feed on the nymphs from the bottom to near the surface of the water sometimes even thrashing through the shallowest water in attempts to knock them from the shoreline vegetation. If you witness this activity it’s time to switch to a full floater and start casting towards shore! 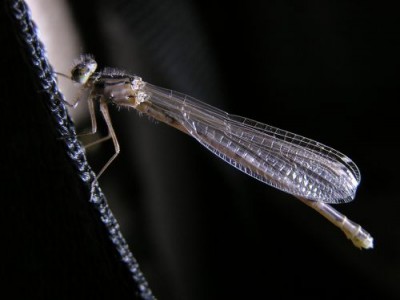 Intermediate (very slow sinking) and floating fly lines are perfect set ups for fishing damselflies. Preferably, use slow sinkers to imitate the nymphal swim from the lake bottom to the upper water column but floaters can work as well. Floating lines should definitely be used to mimic the nymphs more lateral swim in the top portion of the water column as it makes its way to shoreline vegetation to hatch. As well, floating lines are necessary to present any adult patterns.

Damselfly nymphs are not speedsters. They move with a slow but steady but distinct side to side action that is all that is usually required to get a trouts attention. This movement is best imitated with a steady hand twist coupled with the occasional random side to side twitch of the rod tip. 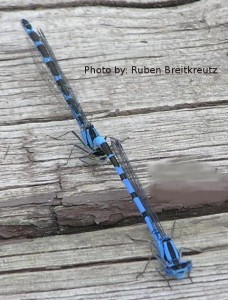 Floating Line / Pre emergence: Attach enough tippet and more to get to the lake bottom. Crawl a weighted nymph slowly along a weed bed with a slow one inch per second retrieve interspersed with two or three second pauses. To imitate false start activity, retrieve the nymph off the bottom, again at about an inch per second, and then let it settle back down and repeat.

Floating Line / Emergence: Use an unweighted nymph and retrieve within the top 3 feet of water, swimming towards or parallel to shore. Retrieve at a steady two to three inch per second rate mixed with random two or three second pauses.

Sinking Line / Pre emergence: Use in depths of 10ft and greater. Cast line and let settle to near or on the bottom. Work the fly along slowly (about one inch per second) with short quick jerks every 20 to 30 seconds to imitate crawling amongst the weeds. Random pauses through out the retrieve are also recommended.

Sinking Line / Emergence – Imitate nymphs early in their emergence stage by stripping the fly slowly upward through the water column off the bottom. Once you reach the leader, re cast and repeat. Random pauses through out
the retrieve ca also work well to trigger strikes.

* In each case, always vary retrievals until you discover what works.

Damselfly nymph patterns range from very simple to very complex. At the beginning of the hatch suggestive patterns will suffice. As the trout fill their bellies, however, they become much more selective and more realistic patterns may become necessary to entice trout.

Nymph: For the BC interior stillwaters our favorite damselfly nymph patterns are tied on #8 – #14 hooks with the best colours being pale green, olive green, tan & brown. Damselfly nymph colouration will be dependent on the habitat in which they live so consider that when selecting the appropriate fly pattern.

If you’re a tier, the flowing action of marabou makes it an excellent choice for damselfly nymph patterns. 😉

Adult: We have so rarely fished adult damselfly patterns that we could only suggest floating commercial patterns that resemble the naturals of where you are fishing.

Back to top
mobile desktop