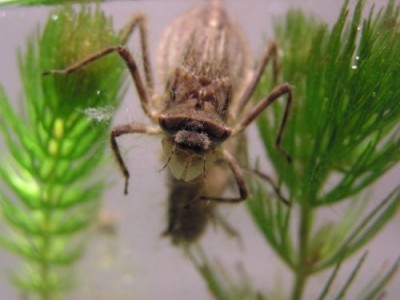 Like Damselflies, Dragonflies belong to the “Odonata” insect order. The Dragonfly has large multifaceted eyes, two sets of strong transparent wings, and an elongated body. They are similar to damselflies, but the adults can be differentiated by the fact that the wings of most dragonflies are held away from, and perpendicular to, the body when at rest. Dragonflies are predators that eat mosquitoes & other small insects. They are usually found around lakes, ponds, streams & wetlands because their larvae, known as “nymphs”, are aquatic. Dragonflies have two fishable life cycles – the nymph and the adult. They are big ticket food items and are therefore very important to trout … which makes them very important to fly fishers as well! 😉

Relevant to BC stillwaters, there are two families to consider attempting to imitate for those interested in fly fishing dragonfly nymphs: the darner, weed dwellers with long bodies and active hunting tactics; and the red shoulder, mud dwellers, with flat round bodies and a shy ambush style of hunting.In both families, as soon as the eggs hatch, the free crawling aquatic larvae (nymphs) molt once and then start hunting voraciously. Both live in their habitats preying on larvae, nymphs, shrimp and small fish. They have the ability to move very quickly if startled, in 4 to 6 inch darts by jetting water through their body. At four years and longer, this nymph stage is the longest stage of the dragonflies life cycle. As the nymphs grows they continue to molt numerous times, usually about ten to fifteen times, until they are fully mature and ready for adulthood. At this time the nymphs seek out vegetation to crawl up and anchor to in order to break free of their nymphal casing and emerge as adults. Emergence is not done en masse like most other insects. Instead, individuals crawl along the bottom toward shore and clamber out of the water during the dark hours.

… check out this National Geographic video depicting the hunting skills of the Dragonfly Nymph!

After their hatch, the new adult Dragonfly spends the next few hours completing its development and “drying its wings” before flying off to begin its mating cycle. Once sexually mature, the male Dragonfly establishes a territory, chases away all other males and begins his courtship with any females in the area. Eventually a male and female will pair and can be seen cruising the skies in tandem attached head to toe. Egg laying typically occurs on protruding vegetation around the waters edge but they can also be deposited underwater, drilled into mud or dropped while in flight … either of which completes the life cycle. 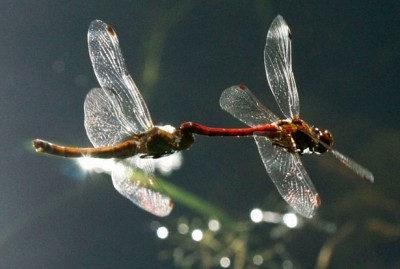 Dragonfly nymphs are a prime food source of stillwater trout and because they are always present in lakes can be fished year round. In the absence of a hatch they can be typically found along the bottom of the lake with the Darners preferring the cover of weed beds and the red shoulder preferring a mud bottom. Both become most available to trout during the spring migration to shallow water, the fall migration to deep water and during emergence in summer. 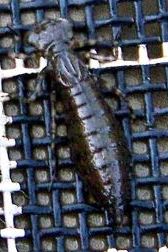 Present Darner nymphs near or on weedy bottoms and Red Shoulder nymphs on or near muddy bottoms. Effective water zones are shallows, shoals and drop offs, from as shallow as 1 meter to as deep as 20 feet or more. During the spring migration work the fly from deep to shallow water. During the Fall migration take the opposite approach and work the fly from shallow to deep. During emergence, crawl the nymph along the bottom toward the shore.

The use of a floating line is effective in 10 feet of water or less. Use either sinking tippet, sinking dressing or a weighted fly to present quickly. Tippet sizes from 4x – 6x is recommended. Attach enough tippet and more to get to the lake bottom and slowly crawl a lightly weighted nymph at about 1 inch per second along a weed bed (darner) or muddy bottom (red shoulder) with occasional quick four to five inch jerks to imitate a startled nymph. During emergence times, retrieve towards to the shore in a slow crawl with occasional quick jerks.

Sinking line should be used for water deeper than 10 feet. Cast line along drop offs and let settle to near or on the bottom. Work the fly along slowly with short quick jerks to imitate crawling and darting amongst the weeds (darners) or mud (red shoulders) similar to the retrieve of the floating line. 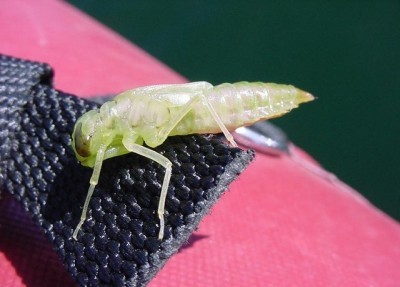 Regardless of the line, always vary retrievals if what you are currently doing is not showing results. Try short jerks to more continuous strips and alter the speed until you discover what works. 😉

Darner and Red Shoulder Patterns in sizes #6 – #10 2X & 3X long. For colours we prefer all the shades of green as well as tan, brown and black. Dragonfly nymph colouration is usually similar to its habitat so consider that when selecting the appropriate fly pattern.