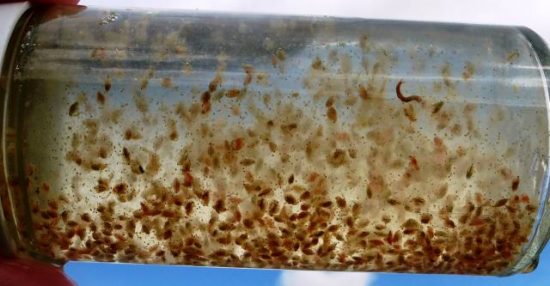 Daphnia are Zooplankton. More specifically they are a genus of small planktonic crustaceans. They are generally translucent olive to rusty brown in colour, found clustered throughout the water column, abundant in our BC Interior still water lakes, and make up a large portion of a trout’s diet.

Despite their importance to trout, historically Daphnia have been ignored by anglers as there was no known way in which to imitate them.  More recently, the development and availability of newer tying materials have allowed for the creation of successful “cluster” fly patterns. striving to understand these little crusaceans is well worth the effort as there are certainly days on the still water lakes of beautiful British Columbia when fly fishing daphnia fly patterns can make all the difference!

As mentioned above, Daphnia are Zooplankton. Zooplankton, like all animals, are heterotrophic, meaning that they can not produce their own food but instead take in sustenance from their environment. Their size ranges from microscopic to large (think squid) and they can be found in most bodies of water from the large oceans to the small freshwater lakes and ponds.

Daphnia range in size from 1 – 5mm. They range in colour from olive, yellow, yellow/brown, green, green/brown, brown, red/brown, red and even sometimes almost black. In each case they appear very translucent.

Daphnia tend to found suspended en mass through out the water column.  They are somewhat negatively phototactic (they move away from light) so presumably then, they will migrate away from the lake surface (where they may have spent the dark hours) as the daylight intensifies, and then at some point later that day, begin their emergence to feed  from deeper water with less intense light levels.

It’s hard to imagine a scenario where one would head out fishing with the predetermination of tying on a Daphnia cluster fly pattern. The reality of it is, more often than not, that it is an option that arises only after all else has failed. No hatches are present and the flogging of the standard meat and potato fly patterns (ie. leech, shrimp, bloodworms, damsel nymph, etc.) have not produced. Or maybe it’s not impossible to hook a trout, but that only very few are being fooled, and the one or two that are brought to net and sampled reveal bellies full of daphnia.

Regardless of how one gets to this point, if you consider that daphnia tend to cluster, and that they are somewhat negatively phototactic, you can imagine that you may be able to factor in the conditions of the day to determine a depth that you might want to start with, and then of course fine tune from there. And given that daphnia move at a leisurely pace, virtually motionless for the purpose of presentation, a floating line with a leader of a length to enable you to cover the full depth of the water column in which you are situated is all that is usually required. In water deeper than 15 or 20 feet however, a sinking line may be more appropriate to reach the desired depth.

Fish Daphnia cluster patterns suspended under a strike indicator, or indicator-less with a VERY slow retrieve as the naturals are taken by trout effortlessly as they swim through the crowd and use their gill filaments to funnel literally thousands of these tiny creatures into their bellies. Daphnia patterns seem to fish best at early ice off and again right before ice on in the fall. As mentioned, daphnia fly patterns can also be effective, or at least get you into a few fish, any time during the open water season when nothing else is working and/or throat samples indicate that the trout are feeding on them exclusively.

Although not exactly a true representation of the natural daphnia, fritz, in it’s many shapes, sizes and colour combinations, is a relatively new and very useful material that allows for the apparent representation of a bunch of, or cluster of, the little buggers! Using this material to develop daphnia fly patterns has helped us to have more than a few memorable days on the water.

Credit for the fly pattern that has revolutionized the way we now think about Daphnia, as a now somewhat imitatable, of sorts, food source for fly fishing trout, belongs squarely with the United Kingdom. Daphnia Fritz, Jelly Fritz, Blob Fritz, Funky Blob Fritz, Slushy Fritz, and the UV versions of each of these, in colours such as  Sunburst, Pink, Biscuit, Safety Orange, Yellow, Melon, Coral and Apricot, to name a few, lol, is enough to make ones head spin!  And something new seems to be coming out everyday! But because of the enthusiasm the blob, AKA Daphnia cluster fly extraordinaire, has been developed and continues to be regularly improved. And so far, it is the most effective fly pattern that we’ve encountered to entice trout to strike when they are focused on Daphnia.

Earlier in this writing I suggested that it would be hard to imagine a scenario in which one would head for the water predetermined to fish a daphnia fly pattern. I was purposely not not absolute because over the last few years we have gained a bit of experience regarding a few water bodies, the species of fish in them, and their desire and willingness to slam blobs at early ice off and then again late in the fall. I’m not going to reveal the where of it all but I will share the fly pattern; which you can find on page 4 of the following article … 😉