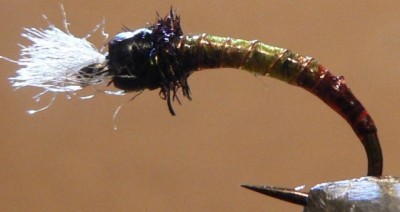 With most of our chironomid pupa fly patterns the concept is simple and durable. That’s not a bad thing because in addition to being easy to tie they are deadly little patterns that consistently fool big BC interior trout! Sometimes, however, the fish are keying in on something very specific and you have to follow suit with your imitation in order to stay in the game … enter the Bleeding Limey Chironomid pupa fly pattern!

The “bleeding limey” chironomid pupa fly was developed out of necessity. It all came about one spring day when we were only  having sporadic success even though every fish we pumped was stuffed full of chironomid pupa. The problem, however, wasn’t that we didn’t have any chironomids in our fly box, but that we didn’t have any chironomid pupae patterns that were a close enough match to the specific pupae that the trout decided they were going to focus on that day. Determined that would not happen again, we snapped a few sample pictures and hit the tying bench. The result was the bleeding limey chironomid pupa fly. Since then, this fly continues to prove  itself every time the fish are on the green red butt chronies. Needless to say it has earned a permanent home in our fly boxes.

Acetate floss is  very similar to standard fly tying floss except that, when treated with acetone, the floss melts and becomes hard and translucent making for some extremely realistic fly bodies. You can achieve very unique results depending on the technique that you use.  You can wind it, braid it and/or layer it to accomplish different looks. You can also use different materials under the floss, which will show through after a dip in the acetone, causing interesting translucence in the finished product. The best way to determine what works for you will be to get creative with it. We often use acetate floss for multi colour bodies (ie red butts) as it has wonderful transition and blending qualities.

…  And then, almost as fast as it came, the hub bub seemed to disappear. Fortunately by then we had already developed a few deadly acetate floss patterns that have remained near and dear to our hearts … the bleeding limey chironomid pupa fly is one of them 😉

And because a pictures worth a thousand words, here’s a video of the whole process! 😀

Whether it’s the “Lady in red, the Producer or the Bleeding Limey chironomid pupa, acetate floss chironomid fly patterns are fished as you would any other chironomid pupa fly pattern – still or very slow moving and “in the zone” (and therefore the fishes view) for as long as possible. You can long line it with a floater or use a full sink right below the boat for deeper water. Either way, if the fish are focusing on this pattern, and probably sometimes even if they’re not, you’re bound to have a lot of fun with this uniquely effective BC Interior fly fishing machine!