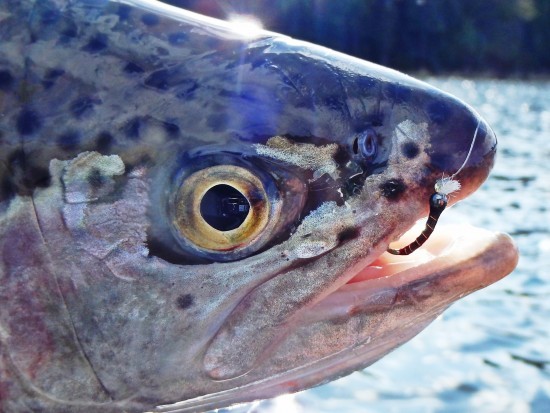 Well It’s winter time, the lakes are icing over and for the avid stillwater fly fisher that means it’s once again time to start replenishing our supplies of our favorite chironomid patterns! Perhaps a little early, but for me the anticipation has already begun! And in preparation of next season, I couldn’t possibly be fully prepared without having a long line up of “Producers” ready to go.  If you’re unfamiliar with “The Producer” chironomid pupa fly pattern, you don’t know what you’ve been missing!

The first time I saw pictures of “The Producer” on the flyguys.net facebook page, I thought to myself, “now there’s a fly that’s going to catch a lot of fish”! I immediately messaged Rob and asked him if he would tie me some. He was able to help me out and I couldn’t have been more excited. I had a really good feeling about this chironomid fly pattern!

But in year that followed my enthusiasm quickly died off as , despite multiple attempts with them, producer success was limited and never approached the the results I had hoped for. So with that the producer took a back seat in the fly box. 🙁 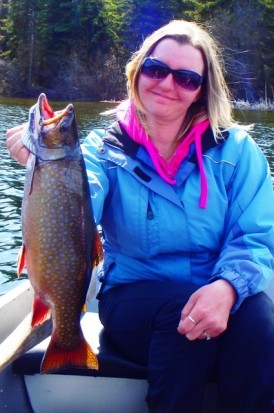 Fast forward to a beautiful spring day the following year, shortly after ice off 2015, with my wife and I anchored in about fifteen feet of water fishing chironomids under indicators and the fishing was SLOW. I spotted a chironomid wiggling it’s way to the surface, and quickly scooped it up off the water. Upon examining it I knew that I had nothing that matched it. However, it did have some red coloration and scanning through my box I spotted “the producer’s” that Rob had tied up for me the year before. I decided it couldn’t hurt to try them out once again, quickly tied one on, cast my line out, indicator disappears and THUNK … I land a nice brookie! I quickly get reset and repeat process BANG … another beauty! Then another, and another! Now my wife wants what I’m using on her line. I tie one on for her, and now the two of us are having a blast catching fish nonstop! A fish on within seconds of every cast! It went on like this for the next couple of hours. I don’t think we ever caught so many fish in such a short period of time! 😀 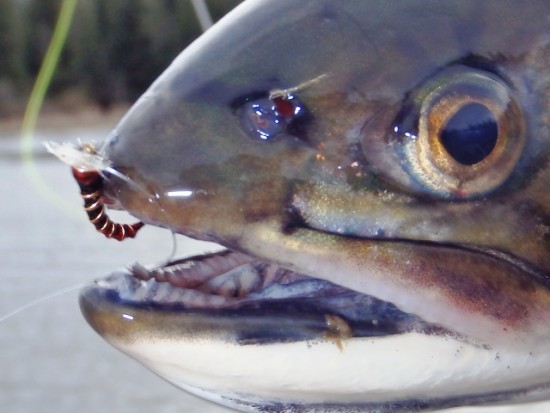 We had so much fun that day that we returned to the exact same spot the next weekend. There were all sorts and sizes of chironomids hatching all over so I don’t think matching the hatch would’ve really mattered. We dropped anchor and tied on some producers. It seemed to be more about timing that day as the bite came on slow. A fish or two here and there, we moved around a little bit and just when I thought about changing flies, the bite was on. We landed about 40 maybe more inside a couple hours almost all were brook trout with just a couple rainbows mixed in.

My dilemma, after a few amazing days on the water all of my producers chironomid fly’s were either destroyed by fish or in some poor fishes lip that broke us off. I needed to learn how to tie them for myself. I sent Rob a pm for the recipe, he asked…”have you ever tied with acetate before?” No, but I was about to learn and fast! 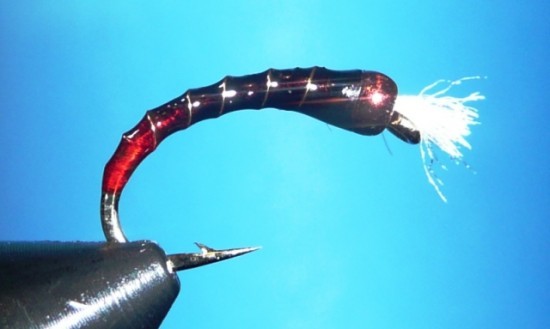 The producer chironomid pupa fly pattern was not as easy to tie as it looked and it was very difficult to get the desired results I wanted. It took a lot of trial and error when I started tying them for myself as I was new to using acetate floss and still relatively new to tying. No matter how hard I tried, they just couldn’t even compare to the ones Rob tied. Well, I’m still not there yet but I am slowly getting there … finally!

So for all of you who would like to give these a go and I’m sure you do, here’s a list of what you’ll need to tie some and a step by step video tutorial that might save you some of the grief and frustration that I went through.  If you find the video helpful please feel free to hit the youtube “like” button 😉

*A big thanks to Glen Heward  for taking the time to put together, and share, this instructional video on how to tie the “producer chironomid pupa fly”! Yes they are a bit of a PITA to tie BUT they’re also well worth the effort as they’ve truly earned their name!

..."just one more cast"
View all posts by Evan →
This entry was posted in Chironomids. Bookmark the permalink.