I was sitting at my vise tying some chironomids when it hit me that last year at this time I was frantically cranking out bonefish flies. A friend said he heard that we were heading for the Mexican Riviera at the end of March and that he’d be down there at the same time. He goes down every year and suggested that since our resort wasn’t  far from where he was staying that he’d pick me up in his rental van and we should go fishing. I was thinking ocean fishing for sailfish an barracuda but he said no I think I can get us into some bonefish!

The plan was to drive to Tulum then branch off on a gravel road into the Sian Ka’an Biosphere. There is a thin strip of land that has the Caribbean Sea on the one side ……. 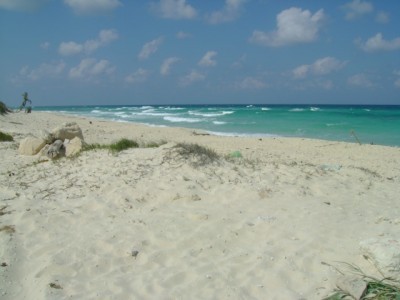 and brackish mangrove of Ascension Bay on the other. 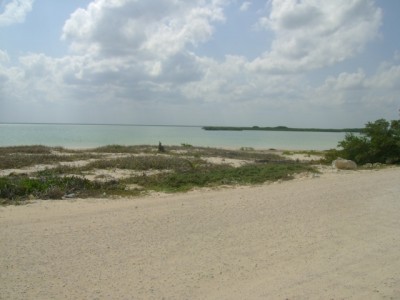 ... and Ascension Bay on the other!

We paid around $5 to enter the Biosphere (Park) and drove down the narrow road looking for someplace to pull over and fish the mangrove. Tough sell as there is barely enough room to pass another vehicle on a good portion of the road. We finally found a little pull off that appeared to have a trail down through the vegetation. After 150 yards we broke through to the water and there 10 ft. out was a small bonefish staring at us. That got us going ! We rigged up and started wading out and down. What I mean by this is not far from shore you start to sink in the muck on the bottom. We ended up 150 ft. from shore with the water at thigh level and our feet buried in goop up past our ankles. This is a little disconcerting  as there is no way you’re moving anywhere fast and sharks and barracuda also have a hankering for bonefish. Anyways when sight fishing for bones there three things to look for:

My expectations weren’t that high and just getting out in the blazing sun and casting when it’s winter back home was thrill enough. About an hour into it and I noticed a muddy cloud about 30 ft. off to my left. I couldn’t  see any fish but I dropped my fly close to the area and did some short strips, bouncing the flu off bottom. Nothing. It was of my 5 cast after stripping a bit I was just going to pull in and recast when bam. Fish On! To give you an idea of what to expect rainbows swim around 13 mph while a bonefish can hit 40 mph. This guy hit the accelerator taking me into the backing and 60 ft. away from where I hooked him in no time. He took at least 5 good runs before I brought him to hand and I was surprised to see he was around 3 lbs. He sure pulled like a 15 lb fish. In trying to get the camera out he flipped loose and was gone. I did manage to take self portrait shot and even with the rod in my mouth I think the shithouse grin says it all 😀 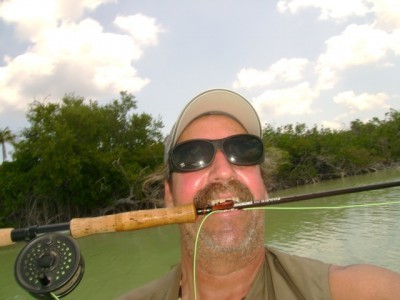 My buddy took a movie of the whole thing but since he was a couple hundred yards away it was kinda like watching a hockey game through a keyhole. We hooked a couple more fish that afternoon but lost them quickly. At one point two large shadows at least 5 ft. long swam between us and shore. I convinced myself they were Tarpon! So there you go. You don’t have to shell out $500 for a guide ……. it is possible to fish on your own!

As far as gear nothing smaller than a 7 weight. I had a four piece 8wt that my friend brought down for me and I used a 7wt reel with floating line I brought with me. I suggest that you buy pre packaged bonefish leaders.

Now for the productive fly. 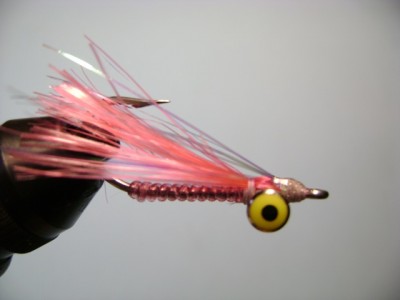 I had tied a bunch of “Crazy Charlie Pinks” and it’s offshoot “Gotcha” flies. The Crazy Charlie Pink is considered the Grandfather of all bonefish flies and imitates a shrimp. With the big barbell eyes tied so the hook rides upright it allows you to bounce the fly along bottom kicking up puffs of sand/mud without snagging. The  most popular colours  are pink, white and tan.  Check out our Crazy Charlie Pink Bonefish Fly Pattern post for details on how to tie this productive bonefish pattern!