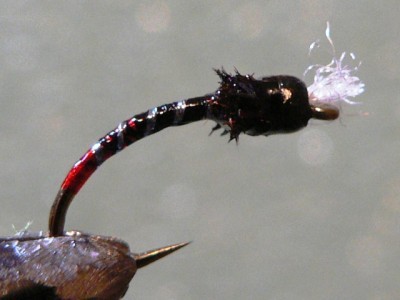 At the time of this writing the chironomid is, and will remain to be till at least mid June, our  “go to” fly for BIG Kamloops area lakes rainbow trout!

So far in our fly tying category we’ve described the KKK and Simple Thread Black & Red chironomid pupa fly patterns, both tied in “ice cream cone” style. This next fly, the simple but effective Black & Silver Red Butt chironomid pupa fly pattern, omits the white glass bead in favour of a black metal bead and white antron wool for the gill. As well, this fly includes a red hot spot tail section to represents the residual hemoglobin that many chironomid pupa display as a carry over from their previous life as a larva. Although slightly more complicated to tie than the previous patterns, the Black & Silver Red Butt Chironomid Pupa fly is nice to have in your arsenal for those days when the trout are being selective for that residual red butt look!

Like most of our chironomid pupa patterns we start with a Mustad signature series C49S or Togens Scud hook. The gills are made from white antron wool and the bead is a simple and inexpensive black metal. The body, including the red butt, is formed using black and red 8/0 tying thread. The rib can be small silver wire or silver tinsel. Top it off with some krazy glue and you’ve got another simple yet deadly and virtually indestructible chironomid pupa fly pattern that is guaranteed to catch fish when the chronies are hatching – and even sometimes when they’re not!

Fish the Black & Silver Red Butt Chironomid Pupa as you would any chironomid pupa pattern – still or very slow moving and “in the zone” and therefore the fishes view for as long as possible. You can long line it with a floater or use a full sink right below the boat for deeper water. Either way, if you find the right size and depth this chronie pupa fly pattern will perform when other patterns don’t!

That’s it … once again no fuss no muss …  no expensive body materials or tungsten beads … just another simple, durable and effective flyguys chironomid pupa fish catching machine. Give it a shot, as far as fly tying goes it really doesn’t get any easier than this.