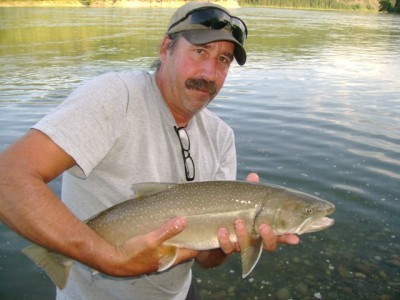 My son, Timbre, and I headed out last week for an evening fish on the Peace Rive. The quarry…. Big bulls.

We headed just up stream of where the Halfway river joins the Peace. This area 5km in either direction at the Tee is closed from March1 to July1 every year to protect Bull trout staging to head up the Halfway and its tributaries.

This is big water so the plan was to rig up for bottom bouncing. Spoons are still the best bet for Bulls but this technique that I am going to share with you allows for 2-3 minute drift and we usually leave the rigging where it stops for another 10 minutes before re-casting. Far less work on a hot and dead still evening!

The set up is a typical bottom bouncing rig with a three way swivel-pencil weight and lure. Lots of times I’ll use a big spin and glow but in the last few years I’ve started using something a little unorthodox. Hoochies! Now there is no way a Bull trout will ever see a squid but what initially caught my eye was the selection of colours Hoochies come in. Once I got thinking about all those legs flowing in the current I knew I had to try them. To get a little more floatation I raid the ol’ earplug box.

– tie on a hook ( I prefer Gamakatsu octopus barbless)

– take a tapered ear plug (bright orange) and squash between thumb and forefinger until you  have a flat disk.

– push hook point through the middle of the disk so that the narrow end is facing away from  the hook up the leader.

– thread leader butt to front through Hoochie. Now just compress earplug a bit and you should  be able to  push it right into the hoochie head cavity.

– at this point I usually thread on a small red bead to rest up against the nose of the  hoochie then tie a non slip loop in the end of the leader.

The earplug does three things: 1) adds red/orange to the gill area of the hoochie. 2) adds floatation to keep it up off bottom and 3) expands around the leader allowing to easily set the hook at different lengths behind  hoochie. 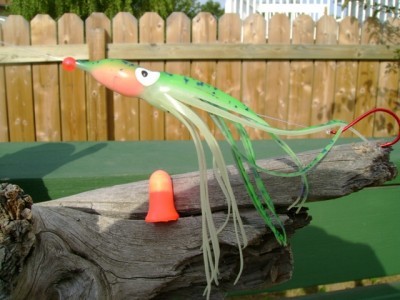 I’m just going to add that I’ve also caught some nice rainbows with this rig also. This trip we caught the 25” bull shown above but you can catch em much bigger! 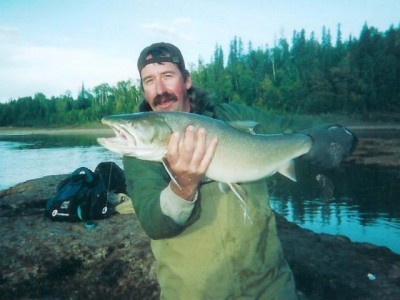 Just remember they’re out there … Go get ‘em!

River fishing & Bull Trout – a few books that may be of interest:

Fishing: On the River & Trout Fishing