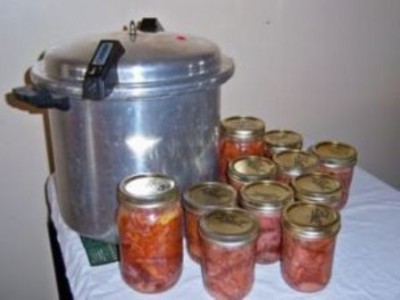 This delicious canned venison recipe was sent to us from Geri, one of our visitors from New York city! We tried it & immediately decided to that it needed to be added to our & list!  Thanks Geri!

I was taught this the old fashion way before pressure cookers were around. It’s quite simple to do and it never lasts long around my house! 😀

Geri’s Canned Venison | You will need …

Pack each jar with venison, onion and garlic, leaving about 1 inch of space on top. Put lids and rings on only until just snug. Put into hot bath for 3 to 4 hours. Take out, cover with a linen towel and let cool.  Make sure all of the lids have sealed, tighten the rings and store in a cupboard. The way I serve it is to pour a jar into a large cast iron skillet, heat until  bubbling, mix a 1/2 cup of water and a couple of tablespoons of flour, stir into the venison mixture to thicken. Serve over cooked egg noodles or rice.

Everyone that has ever had it at my home doesn’t realize it is venison unless I tell them. Then when you tell them it’s canned meat they don’t believe you. I did an entire whitetail in November and used the last jar this past week! It never lasts long  in this house, with my husband’s and son’s friends that end up staying for dinner! 😀

*** got a fish or wild game recipe that you would like to share on flyguys.net? Just email us the details and we’ll post it up for you!

*** for more delicious and organic BC wild fish & game recipes please view the complete list on our recipes index page!