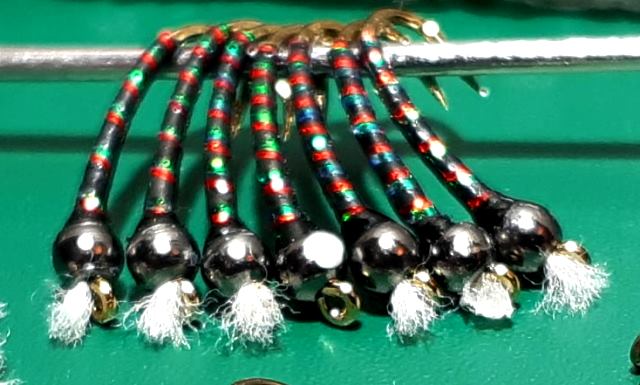 I’m not sure when the Pornomid fly was developed, or who developed it, or even if the fly I was initially shown, and to this day refer to as the pornomid, is actually in fact the pornomid, or not! What I do know is that it was the early 2000’s when I first came across it 😮 and since then whenever I’ve used it I’ve been very pleased with the results! I used to fish the pornomid regularly, but it eventually got regulated to the back of the fly box as newer patterns were being developed and tested and it just plain became forgotten. But every once in a while someone brings it up and I get back on the pornomid bandwagon. So when I just recently was reminded about it again I decided that I should get a post out on it before it once again faded out of my memory.

The original pornomid, as I know it, was tied on a scud hook, with a black bead, a glossy black(ish) body made from a strip cut from a VHS tape (I guess someone’s old porno), an iridescent red rib and a white dot on each side of the bead to represent gills. The general consensus seems to be that the red rib was made from Saltwater Crystal Flash, but some say it was Bloody Red Flash. Regardless, both are obsolete so as a substitute I have been using regular red Krystal Flash followed up with a strand of Pearl flashabou, which seems to work very well! I typically tie/fish the pornomid in size #10 suspended under an indicator. It’s a great searching chronie but also seems to work well “standing out in the crowd” when the hatch is thick!

And once that’s all done she should look something like this ……. 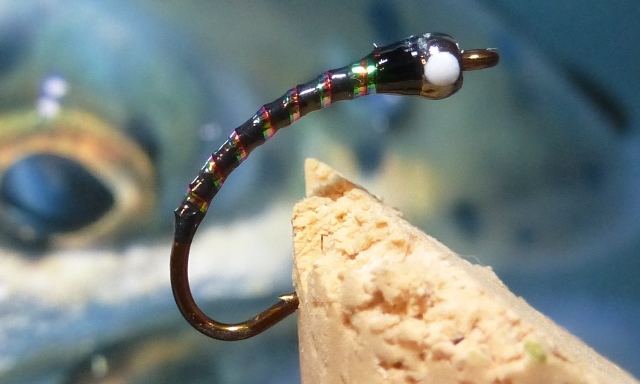 Now with all that out of the way let’s talk a bit about VHS tape. The first issue is that VHS tape is also no longer being made so you need to find it. Granted if you do find it one tape is more than a lifetime supply of pornomid body material! But it’s not that easy as not only do you have to find it, but you have to find it with a tape colour that works for you (that’s right the colour range seems to vary greatly!). And finally, let’s say you’ve found a VHS and its tape is an acceptable colour, well now you have to cut it into nice uniform strips as to not end up with a lumpy pornomid (that’s just not a good look on a pornomid! 😆 ). The following image illustrates an extreme difference in colour between two different VHS tapes, as well as some of the “lumpyness” that can occur when it’s not cut uniformly thin. 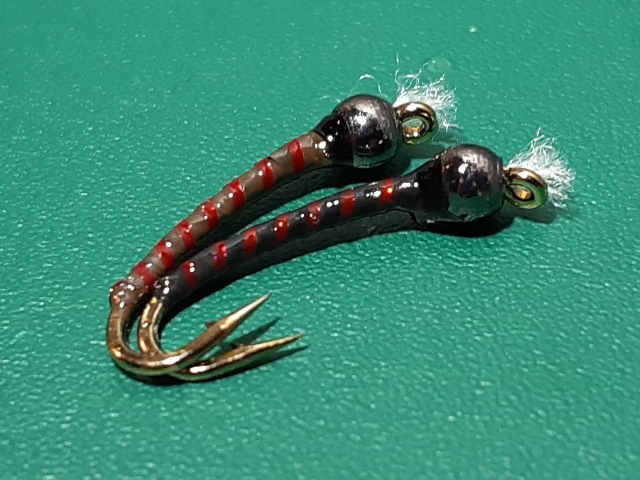 OK so now what? Well so now take the time to find a VHS with the right colour tape, and if/when you do take the time and cut it into nice thin even strips!

Or ……. forget about the Pornonmid and say hello to the Window Washer (hmm, pretty sure that’s the name of the movie on my pornomid VHS! 😛 )  The Window Washer Chironomid Pupa fly is a pornomid variant tied with our unique, uniformly cut, Window Tint capes. Head over to  flybuys.ca, grab your self some in 1mm Dark, and then follow the steps in the video below to spin up some easy peasy no muss no fuss instant Window Washer Pornomid style chironomid pupae flies!

That’s all folks! Tight lines & good times from the BC Flyguys!

*** if you’re interested in custom tied, time tested & proven effective BC Interior fly patterns, but would rather buy than tie, please check out our store!