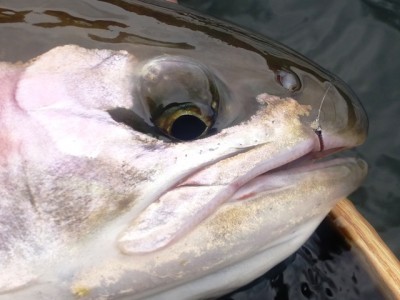 Anybody who fishes chironomids as frequently and avidly as British Columbia’s Interior fly fishermen will have dozens of favorite and well used chironomid patterns. You wouldn’t consider that coming up with “just” ten favorites would be a daunting task, but for me, it is. While rummaging  through my chironomid boxes, which literally consist of a couple thousand flies, I often come across a particular pattern that I can associate a lasting memory with, but in the end, these picks are the ones that have left the most lasting impressions and fondest memories. Forgive me if the following passages refer back to Tunkwa Lake time and time again, but having spent 9 years there, there is not another lake on this planet that I have fished more often or has left me with fonder memories of some absolutely amazing fishing using these types of flies. 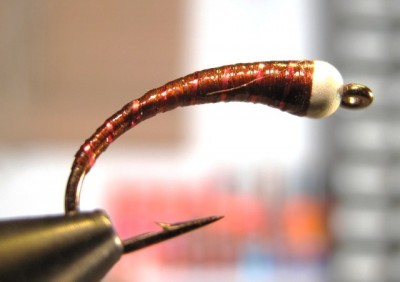 Whatever you know it by, this pattern is well known to chironomid fishermen and the naturals can be seen emerging in sizes from #16-8 any time from ice-off to ice-on.There are many variations available tied with such materials as scudback, frostbite, flashabou, liquid lace and even rust brown thread. It is best to finish off the pattern with a coat of shiny hardener such as Sally Hansen’s. 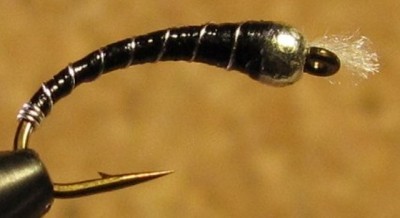 Whether it be the pictured black and silver or the optional black/red this is the most commonly used pattern today. Sometimes I will go so far as to use a double rib pattern of silver and red. I do like the idea of the silver bead to suggest the gases the pupa traps under it’s skin to aid in it’s ascent to the surface and emergence into adulthood. 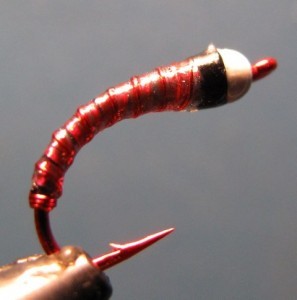 Without a doubt the most popular body material in the past five years has been anti-static bag that computer components are packed in. If cut into very narrow strips it makes a very good body material for chironomids. There are several different types with the more translucent types being preferred to alter the body color simply by changing the color of the under-body, whether it be thread or flashabou. ASB is used to imitate the gases that are trapped under the skin giving the naturals a shiny appearance. 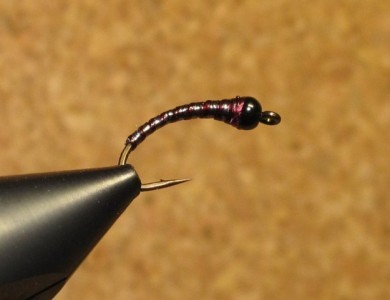 Guns n’ Roses Chironomid Long before there was anti static bag there was gunmetal flashabou, a shiny gray product that performs the same effect. After collecting some natural samples from Tunkwa during a heavy emergence I came up with this creation which has provided some memorable days on the water. By using a wine colored tying thread and maroon stretch tubing as a rib, the appearance closely emulates the natural. There is a single spot of white lacquer on the black bead to suggest gills.

When you want to fool large fish with a bloodworm pattern sometimes the body material is the deciding factor. After several trips to the UK I began to see the benefit of seal fur in regards to chironomid development. The problem with seal fur is it’s coarseness and how hard it is to spin onto thread so for this particular pattern I used a dubbing loop and just enough seal to conceal the thread. The pattern in the photo has been chewed and is slowly coming apart but seal makes a very durable pattern and actually helps to protect the fragile tinsel rib. 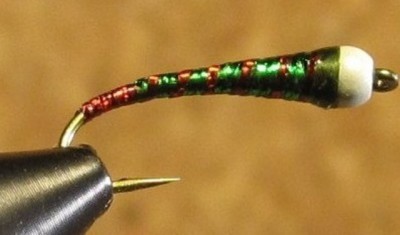 In the larval stage if the natural doesn’t absorb all the hemoglobin, they will end up with a red tail tip during the pupa stage. Any well prepared chironomidder will have Redbutt patterns in several colors. Lodgepole Lake is a picturesque lake in the Kamloops area with beautiful shoals that provides a pretty setting for productive chironomid hatches and this thin redbutt pattern is always the first one to be tied on when I visit. 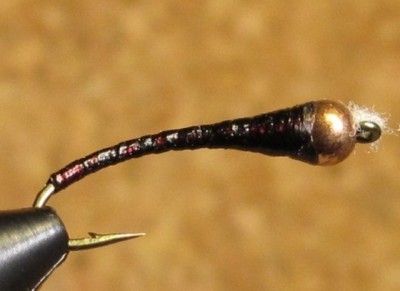 From spring to fall this dark reddish brown pattern has been a top performer for me for close to ten years now. Utilizing an under-body of red holographic flashabou and an over-body of dark reddish brown Rainy’s Stretchflex, a copper bead and a rib of either copper or red Ultra Wire, this pattern is well received by the targeted quarry year in and year out. In smaller sizes I like it tied on a Mustad C49S scud hook but when those huge bombers are about I switch to a Tiemco 200R type hook. 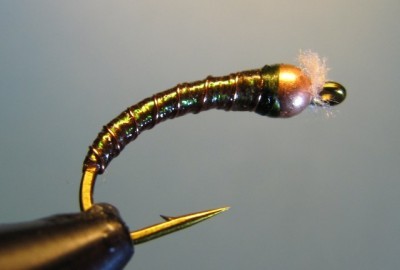 In the darker tannic stained waters of the Thompson-Nicola Plateau you will find a lot of darker olive colored naturals and this pattern was developed to imitate those naturals. Tied with either a copper or gold beadhead and corresponding rib. I use a green-olive tying thread with a tan scudback over top which gives the appearance of a dark and dirty olive shade. Sometimes drab colors are the only solution to solving the puzzle of difficult hatches and at that time I will incorporate a black bead and black rib. 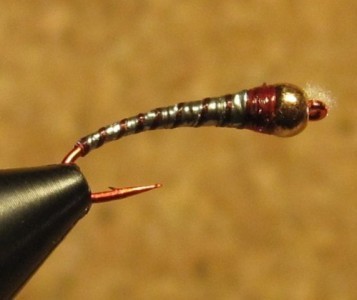 Every once in a while when I tell inquisitive tyers what I use for body materials, my response is met with a raised eyebrow and this is one such pattern. My wife has me well trained by now that when she shows me a material outside of the realms of fly tying and says it will make a good pattern I pay attention. So it went about five years ago when she brought  the packaging on a white loaf of Wonder Bread to my attention. Taking the metallic gray material and cutting it into thin strips and coupling it with a burgundy rib and tying thread topped off with a copper or black bead became the Wonderbug. In the early spring there is not another pattern suspended in shallow water that even comes close to the productivity of this pattern. Once the fish move off the shelves into deeper water the pattern seems to lose it’s effectiveness but for that first two weeks of May, it is an essential resident of the fly box.

I wish I was more adept at photography to convey the significance of the color of this pattern in the photo. The key to the success of this chironomid is the body material which is a tinsel called Mirage. Mirage comes in two similar but very different colors, pearl and opal, with the latter being the most significant. Tied with a rib of wine wire, wine colored thread and a copper bead this pattern imitates nothing but is an attractor that has saved countless days from being a bust. There are days when the fish just seem to have lockjaw and won’t take anything. I don’t know what aggravates them about this pattern but the hits are always vicious and sometimes it takes a 2 foot ”rip-strip” to really piss ‘em off! They always seem to slash the fly on the drop and rarely when it’s sitting still under the indicator. This pattern is tied from size 14-10 and always on a scud hook.

So, there you have it, my top ten list. In six months I would probably have a couple different patterns included but the nucleus of six or seven favorites will always be in my fly box. Give some of these a try the next time you are out on the water.

*** A big thanks to John Kent for sharing his article on flyguys.net! If you’re interested in any of the John Kent Top Ten Chironomid Flies, or any of John’s many other fly patterns, you can reach him at jhn.knt@gmail.com 🙂