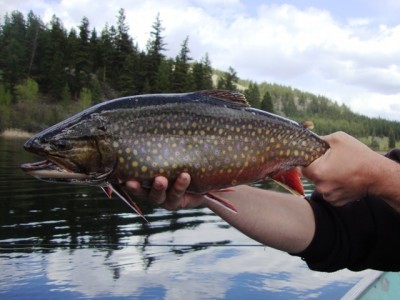 So after all the talk of potential winter kill, and all the glum early ice off reports, we decided to put in a few days at Red lake Kamloops to check out the situation for ourselves. Here’s a better late than never report …….

Upon arriving at the lake we unloaded, prepared our gear, and proceeded to tour our usual “honey holes” in search of moving fish and/or insect activity. The day, and turns out the entire week, was fraught with unsettled weather which made noticing any surface activity quite a bit more difficult than normal. The wind was also howling which removed the ability to hear any rises. Undaunted we moved across the water marking areas of promise. After about an hour, with no real hot spots identified, we decided to start in the bay in front of the rental cabins as we had noted other anglers having some success in that general area. We anchored in 18 feet of water and set up with chironomid pupa … JeFF right on the bottom with a #16 Producer and myself at about 12 feet with #10 LA Chromie.

About ten minutes later and it appeared that I had chosen wisely as I was rewarded with a nice fat Red lake Brookie!

A quick throat sample confirmed that the brooks were indeed on the larger bomber size chironomid pupae.

A fast fly change to “match the hatch” by JeFF and we were both into them fairly steady for the next hour or so!

It didn’t take long to conclude that any rumours of a serious kill, at least for the Brook trout population, were thankfully unfounded. Still unsure about the rainbows however, we decided to pull anchors and relocate in search of the elusive bows. 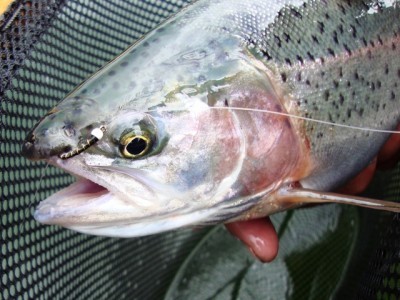 Our next stop was just off a shallow point between the narrows and the north end of the lake where we had relatively good success with the bows in the past. On our way through JeFF spotted some big chronies hatching so we immediately dropped anchors and set up right there.  Before casting we scooped a pupa up off the water before it had hatched out and noticed that it was a shade of dark green to almost black. Seeing that we switched over to Zucchini’s and RLS’s, varied our depths and began to work the water column. I wish I could say the fishing was spectacular but it wasn’t. The good news was that we hooked into three rainbows. The bad news was that it took us about six hours to accomplish it and they were all fairly small for Red lake standards. Over all though we were happy to see that there were indeed still rainbows in the lake! 🙂

The remainder of our trip was very similar to day one with numerous brook trout being caught interspersed with a light sprinkling of rainbow trout activity through out each day.

We seemed to be able to pick up the brook trout where ever we were fishing but if we had to pick a hot spot we would have to say it was the south (launch) bay where they were taking it light but steady.

Here’s a video of us having some fun in “Brookie Bay”!

As you can see from the video the Brook trout fly of the trip was the RLS in size #10 & #12 with the Producer & the Zucchini close behind. Our biggest brookie of the trip weighed in at 4.5 lbs! 😯

As for the bows, most averaged in between 2.5 and 4 lbs with the odd lunker giving us a tug once in a while … not too shabby  considering the rumours of a complete kill but there is no doubt in our minds that the bow numbers definitely took a hit over the last winter. 🙁

Here’s a short video of one of those lunkers being put back in hopes of growing to fight another day …….

Unlike the brookies, the rainbows were where we found them as we never did find any one location to be any better than another. The rainbow fly of the trip was the Zucchini followed closely by the LA Chromie Red Rib … both in size #10. 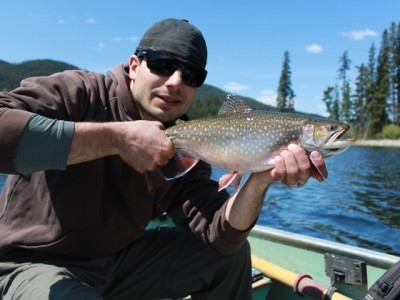 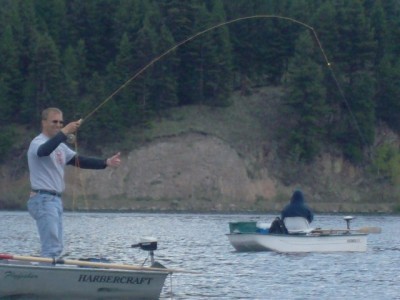 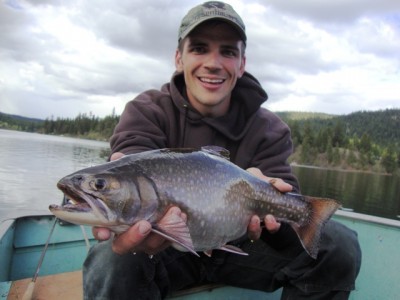 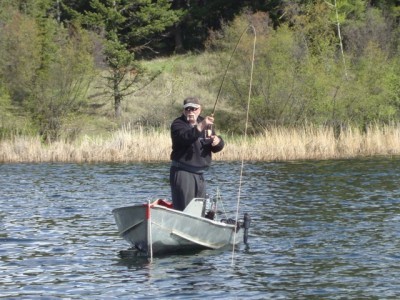 JFM with one on the hook! 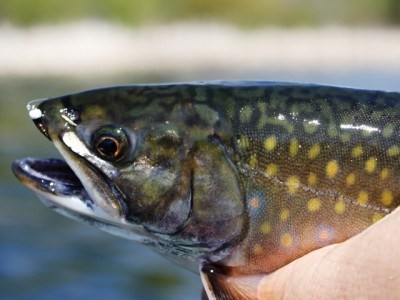 The RLS in Action! 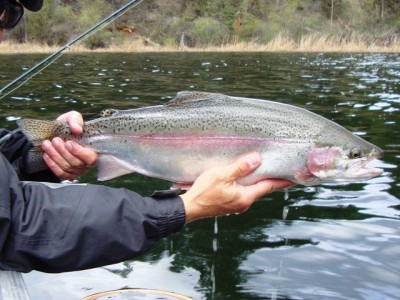 *… looking for more info on our flies? Checkout our fly patterns page or contact us for details!

... flyguys chief webhead, when not fishing ;)
View all posts by BCFlyguys →
This entry was posted in Fishing Reports and tagged 2012, Fishing Report, Kamloops, Red Lake. Bookmark the permalink.