A week into the New Year and I finally get a chance to head out for some ice fishing. They were calling for snow to start around noon and progress into a blizzard (50km winds) in the evening. The temperature was fine at -12C but it was suppose to get back to daytime highs in the low – 20’s starting in the evening. Small window… more like a portal. 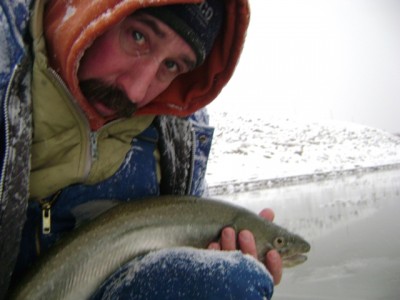 I left in the dark and drove 1 3/4 hours to Williston Lake planning on getting there at daylight. This lake always produces best from daylight until noon. As I pulled into my parking spot and looked down at the lake there was something amiss …….  ICE!  😯

Williston doesn’t usually freeze until Jan. but with daytime highs averaging around -21C for Dec. I thought for sure it would have ice on it Not letting a small detail like that get in my way I suited up, grabbed my gear(sans auger) and climbed down to the shore. I pounded in a rod holder and rigged up one of my river rods, tipping the hoochie with some shrimp. The snow was starting as I fired the rig out about 20 ft. from shore. I put the rod in the holder and started to settle in. Not much settling happened as there was a pod of rainbows out there and I was hooking fish on every cast for about an hour. Most of the fish were just under or just over 12 inches but I kept 3 of the bigger one around 16-17 inches for a fish fry. 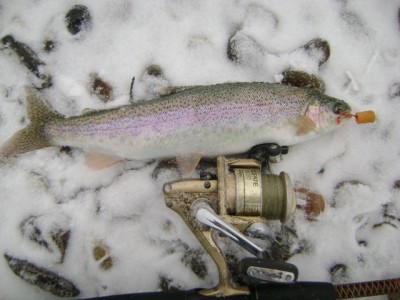 The snow just kept getting thicker and thicker and because the water temperature was right close to freezing it started to form slush on the surface. After the first hour things started to slow down a bit although I managed to catch a 5lb Bull trout at around 1:30 PM. 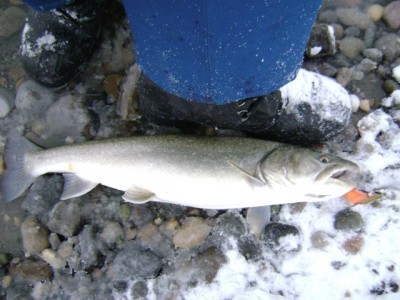 Shortly after I pulled the pin as the wind was picking up and I didn’t want to get caught driving home in the blizzard.

The rainbows from Williston, as always, tasted like candy when we cooked them that night and once again I was in the good books with the wife.