Turn Over & Lake Stratification Made Easy 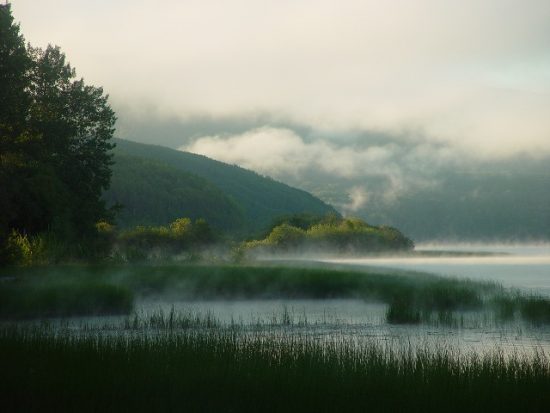 For many of us some of the terminology and slang associated with our sport is extremely confusing. “Turn over” (lake stratification) is one of those terms and every year, especially during the winter when fishermen are anticipating ice off and dreaming about spring fishing, we get a lot of questions about it and its relationship to fishing. What does it really mean and, more importantly, how does it affect us as fly fishers. Of all the answers that we have seen, we feel that the following by Todd Oishi does the best job of explaining it all!

Turn-over is a term used to describe the mixing or rotation of water within the entire water column of a lake (from top to bottom). Turn-over typically occurs in the spring, just after ice-off, and again in the fall when the water temperature at the surface reaches 4°C (39°F). It is nature’s method of re-oxygenating the lake’s waters from its surface to the bottom.

To better understand when and why turn-over occurs, it is important to recognize and understand the relationship between water temperature and water density … 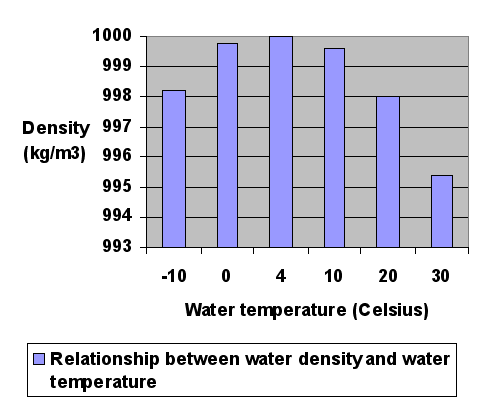 In its liquid form, the density (weight / mass) of water varies with temperature, and by the levels of impurities or suspended particles. Clean, pure water reaches its maximum density of 1000 kg/m3 at 4 °C, and is less dense at temperatures both above and below 4°C (see above chart). The variation in water temperature and density within a lake causes the water to stratify into three distinct and separate layers of water from the surface to the bottom. These layers of different densities are called the epilimnion, metalimnion, and hypolimnion.

The epilimnion is the upper most layer of water that is generally consistent in density and temperature and possesses the warmest temperatures due to higher levels of sunlight penetration and higher levels of oxygen as a result of the constant mixing action provided by the wind (extreme temperatures being the exception). The hypolimnion is the bottom layer of water within the lake and possesses the coldest water temperatures, and lowest levels of oxygen. The metalimnion is the middle layer that acts as a barrier between the epilimnion and hypolimnion, which prevents the mixing or interaction between these two layers of water. The thermocline is a narrow band of water that is found within the metalimnion layer and possesses the most drastic change in water temperature and density as a result of the lack of sunlight penetration and its interaction with the cooler waters of the hypolimnion.

In the summer, warmer water is found near the surface while cooler and denser water (that possesses the lowest levels of oxygen during stratification) is found nearer to the bottom of the lake. Stratification of the lake’s water helps to maintain higher levels of oxygen in the water that is closer to the surface, which creates an ideal environment for the lake’s fish and for fly fishing. During the heat of summer, trout are often found just above the thermocline, which can make identifying its depth extremely important for greater angling success. Very shallow lakes tend to receive fairly high levels of sunlight penetration throughout their entire water column, which maintains a narrower range in water temperature from top to bottom and as a result, stratification and turn-over may be very minimal or not occur at all. 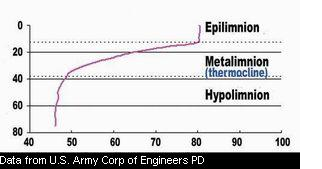 Temperature changes within the various depths of a deep lake during summer stratification.

During fall, as winter approaches the temperature of the surface water cools down significantly and becomes denser, which causes it to sink and force the less dense water up towards the surface. When the surface water has cooled down to the magic number of 4°C, the entire water column will have achieved equal temperature and density from top to bottom. The uniform density of the water allows a brief window of opportunity for the entire water column to easily mix and rotate with a little help from currents that are created by wind. During turn-over the lower oxygen levels of the hypolimnion mix with the rest of the water column and greatly reduces the overall oxygen levels within the lake. This can stress the trout and cause them to stop feeding until oxygen levels stabilize and return to higher levels after turnover is complete.

After fall turn-over, the lake stratifies but its stratification is far less severe than during the summer, as the variation in water temperatures and density from the surface to the bottom is generally quite narrow prior to freezing-over. Between 4°C and 0°C water possesses very similar densities, which makes it prone to mixing by the harsh winter winds until the lake is sealed under a protective layer of ice.

During turn-over the water within the lake appears turbid or cloudy as clumps and fine particles of decayed plant matter and organisms can be observed floating near the surface or suspended throughout the water column. Upon arriving at a lake that is in this condition, an angler would be wise to seek other waters, as the quality of angling will be extremely poor at this moment in time. Selecting an alternate lake at a different elevation, or a neighbouring lake with less depth, which has most likely turned-over already, would be the most logical choice. The good news is that within the next week or two (depending upon the amount and the severity of the wind) the oxygen levels within the water will reach some of their highest levels, causing the trout’s appetite to kick into overdrive, which in turn can provide some of the most exciting and productive fly fishing of entire the year!

So there you have it – turn over made easy … Thanks Mr. Oishi!