Well the fishing was tough … and it was cold … and wet … and it lasted the whole day cept for a 15 minute reprieve when the sun showed it’s face around noon … and did I mention the fishing was slow?  But plans were made days before and by God we were gunna stick to them come hell or high water – which it kinda felt like by the end of the day.

The day started with breakfast at a local diner for Dan, Wayne and Peeler, followed shortly by the bumpy road into Lunker lake, a 3900 foot water body nestled just off hwy 5 about one hour from Kamloops, where they met up with JeFF, myself and  eventually Darcy and  Ron. The weather was ugly but we persevered as planned and everyone got set up and hit the water.

JeFF and I spent the first while just cruising around the lake looking for signs of insect activity – which we found to be almost non existent except for a few tiny midges here and there. With not much to go on we started with the meat and potoatoes and flogged the water for a few hours with different varieties of shrimp, leeches, bloodworms and chironomid pupa – all to no avail! Then it happened … just as we though all was lost JeFF’s indicator plunges into the depths and the fight is on! It didn’t last long however as the feisty bow threw the hook on her final leap from the water leaving us with one final look before disappearing forever. We guessed her to be six to seven pounds.

Then, just as we were settling back into our fishing routines, we heard a shout from the other side of the lake. “I think that’s Wayne and Dan” JeFF said. So with out further to do we pulled anchor and made our way towards them arriving just in time to see this: 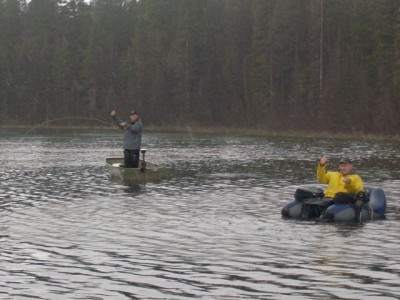 Followed shortly by this: 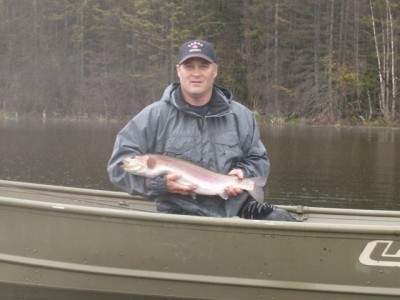 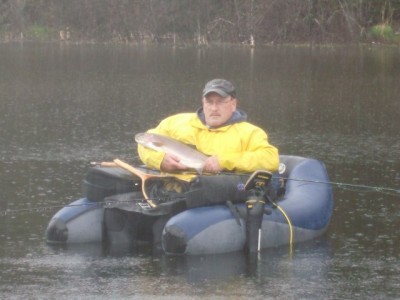 Holy chit! Not only a double header but a monster fish double header! All of a sudden the rain and cold weather didn’t seem that bad! In fact, I don’t think we even noticed it for a while!

After a few photos both fish were released unharmed and we spent the next few hours trying to top that performance. Unfortunately, a few big tugs and a couple smaller fish were all the group could come up with. Oh well, after that it really didn’t matter!

So that was that. We packed up, had a few pops and a bite to eat and made plans for tomorrow so stay tuned!