Ahh the BC Interior … a lake a day as long as you stay … and this day’s lake was Roche!

For those that don’t know, Roche is one of the more popular lakes in the Kamloops area. It is located about 45 minutes south of Kamloops off of highway #5, sits at about 3800 feet and is famous for it’s large shoals, diverse insect population and large rainbow trout! More information on  Roche and it’s area lakes can be found here. 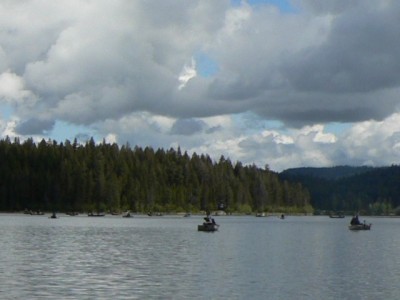 The picture does not do it justice … in the many years that we have fished Roche lake we have never seen it as plugged up with boats anchored fishing chironomids than we did today! At one point we counted 52 boats anchored just in the section of the lake that we could see!!! 😯 Looks like the words out … damn those interweb fishing sites!!! 😉

Today’s weather was notably better than yesterday’s! Actually, come to think of it, with only one short hail storm it was probably the best weather day we’ve had while fishing yet this year (I’m not even kidding!)! And, with the better weather came better fishing and, although not “stellar” by any means, it was fairly steady action with feisty penasks to six pounds! 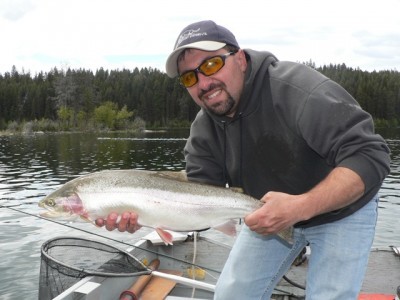 The fly of the day was … you guessed it … the chironomid pupa as we had most of our success long lining a KKK chromie below an indicator in Roches famous “monster bay”. And even though we did not fish them, it was nice to see both the mayfly and caddis make an appearance on the water later in the day!

Throat pump samples of the fish we tested revealed a mixed bag of chironomid pupae, chironomid larve (bloodworms) and shrimp. Although no mayfly nymphs or caddis pupae showed up in our samples they are starting to show up. It definitely won’t be long until the fish are on them so if you’re planning a trip to the area in the near future we’d highly recommend you tie some up and bring them along!

OK that’s it for now folks … please post any questions in the comments section or email us and we’ll try to get back to you ASAP … and stay tuned cause June has just begun!