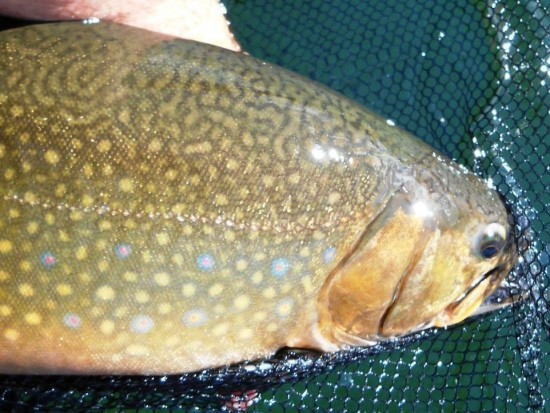 Well after 5 days of fishin’ and cavorting it was time to turn the jeep around and head home. That was one tough drive! What normally takes me 11 hours took 12 plus. Two nights of fishing and two nights with the boys and I put everyone to bed all four nights. At the GOEG that required 3:30 AM both nights then up for breakfast around 8:00AM. My advantage was that they live there but when I get back to the ol’ stomping grounds I want to soak in every second I can.

Anyways we roll into FSJ around 7:30 PM Monday night and it’s 24 C out, beautiful evening. Wednesday morning going to work and there was white-out snow conditions on the Alaska Highway. Welcome home … here’s my 2014 Northern BC fishing report since I’ve been back! 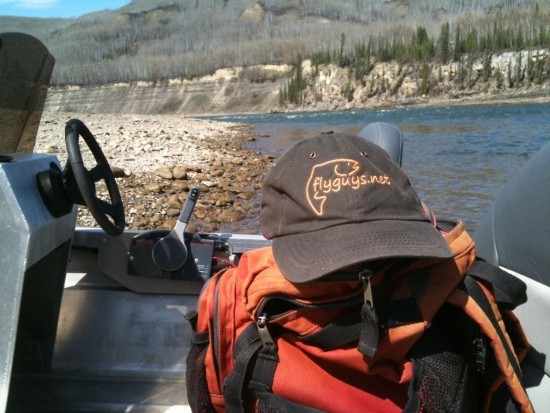 Friday rolls around to blue sky, calm and forecast highs of 18C so it was time to take my boat out to my favorite lake. Steve and I had tried it 2 weeks earlier when the lake had been ice free for about a week. It’s a two and half hour drive and when we got to the lake conditions weren’t too bad. Of course within the hour we were anchored in 30KM, gusting to 50KM winds trying to fish chironomids under indicators. In other words straight out the back of the boat with the wind. Evidently we may have stepped on a spider on the way out as it started to drizzle. Then pour so hard I checked the bottom of my boots for tarantula guts.

We sat there for an hour with those big drops going sideways and pelting us. Then since we had gotten up at 4:30AM we decided to head in and have a nap in the jeep until it blew over. Three hours later it had died down to a drizzle but the winds were still there. Time to go fishing again.

We fished for three more hours but the only fish was hooked on a UV Chewskin proto-type dragon I was working on. I had it on a intermediate camo line and was letting it sink to bottom then stripping it in. Close to the boat something fairly big nailed it, then did a Maypole dance around a clump of weeds and was gone. I’m not proud to say I fought those weeds for about 20 seconds before I realized what had happened. 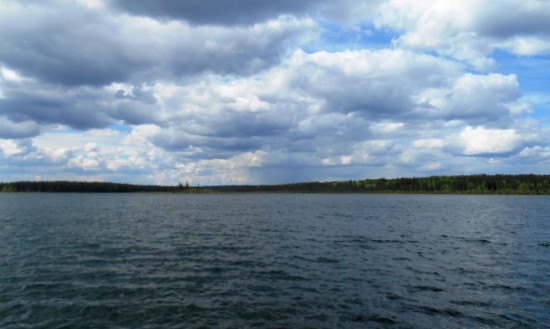 When I got to the lake this time everything was perfect. I did a tour looking for some chironomids or cases. Over by the flats/drop-off there was a huge hatch going on. Problem was they were tiny. In fact I’m not sure they were chironomids  as they were the size of 5 or 6 atoms. You couldn’t see any shucks with the naked eye and I bet it would take a cluster of about 50 of them to equal a size 26 hook. There’s your next challenge Rob , tie me up a dozen, Ha I think they had red ribs. I set up shop on the edge where it goes from 4 feet to 12 feet with a small rootbeer chirony on one line and Bloodworm Blood Clot on the other. The BBC went down a couple times then I hooked into a 12 inch Brooky. I really haven’t tried that fly on any other lakes with Brook Trout but on this one it slays them over Rainbow 10-1.

Things died down so I pulled anchor and moved farther down the drop-off. It was about then that the clouds that’s had been stacking to Southwest spilled over the horizon and I thought,” Here we go again.” Actually it wasn’t bad the rest of the day just the odd shower. What I did notice was, every now and then, I’d see 1 or 2 swallows out touring the lake looking for a hatch then heading back to shore. I was waiting for them to set up somewhere and their buddies to join them but it didn’t happen. 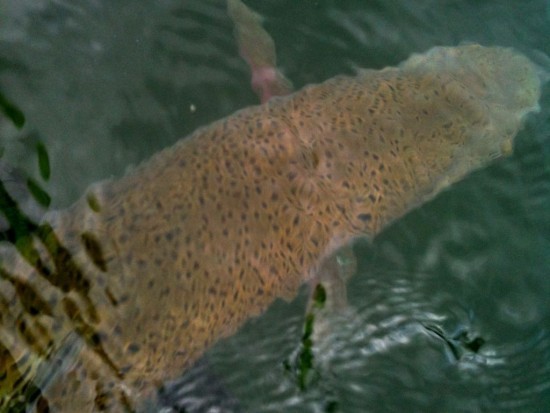 By now it was mid afternoon so I moved on down the line again and changed up the chironomid to a mini-gold bead maroon leech size #14. Wasn’t long after I looked out and the mini-leech indicator was gone. I grabbed  the rod just as the reel starts screaming. It was evident pretty quick that this was probably a Brook trout as it was dogging it on bottom. As with most lakes the rainbow here show themselves right away when hooked. I knew this was no 12 incher with the tugs and head shakes so I settled in for a bit of a battle. But just then boom up he pops right be the boat. I fumbled to grab the net and scooped him up ending the fight long before it should have. What I was staring at was a beautiful, canoe paddle Brooky! I could see the little gold bead twinkling just inside his mouth right on his snout. Now I learned a long time ago not to stick my fingers inside any Bull trout’s mouth over a pound, but for some reason I thought it’s just a Brooky. Well a char’s a char and when I had my fingers on the fly this still green mother clamped down and did a barrel roll in the net. Needless to say I was dripping blood everywhere as I dug in my bag for a pair of rheostats. Turned out to be 20” x15” and with the Brook trout weight calculator  5.65 lbs. I bid him farewell and hold no grudge even though I still have 2 good slashes on my index finger. 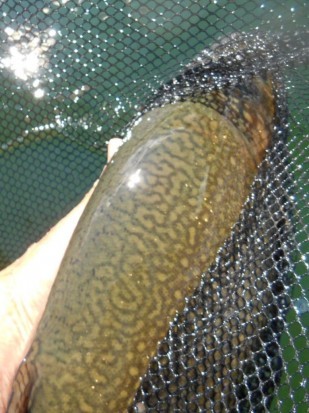 I fished for another hour and was thinking of packing it in when the leech indicator goes down again. This time I was hanging onto the rod and whatever hit the fly appeared to have nailed it coming off the shoal. I watched my chartreuse indicator scream along about a foot under water. I had a flashback to the movie Jaws where the shark is cruising pulling the bbls just under the surface. It went under my other line then about twenty feet out and cleared the water by a couple of feet. A biggin’ but I was worried as I still had 6lb tippet on from down in Kamloops and if she turned into the weeds it was all over.

She did some zig-zagging out there then did 1 long run towards the middle of the lake. I was now looking at bright coloured backing that hadn’t seen the light of day….ever. I thought about maybe chasing it but was worried about giving it any slack plus I didn’t mind wearing it out away from the weeds. Long story short it was quite the battle, around the anchor rope twice and sliced up weeds surfacing all around the boat when I got her in close. I was shaking after netting her and almost dropped my camera in the lake. Just a couple quick photos and a lengthy revive before she swam out of the net. 29” X  17” = 10.47 lbs. With that I reeled in the lines , pulled anchor and headed in thinking, ”Welcome Home.”