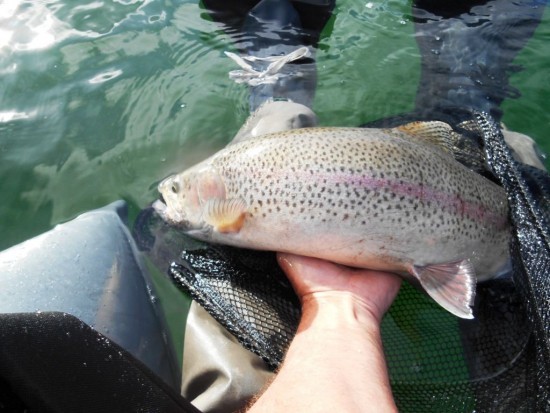 Is there a better way to spend Canada Day then hiking in and setting up on the shores of a Rocky Mountain lake with giant wild alpine trout? NOPE! Steve, Aaron, Mitch and myself  were preparing to head  back to the lake we hit up last year.  This year we were going in a couple of weeks earlier and my son Timbre was joining us. We had lined up 3 pack horses and under full packs we started our climb up to Mutton Manor( more on  this later). Of course the three young bucks set a blistering pace pulling away from Steve and I. Funny thing though they would always fall back towards us. I would like to think that it was a little respect for their elders but I knew it was because we were packing the Defender (loaded with 6 slugs). My knees and rehabbed ankle hung in there but evidently  I need  a new thermostat as I was over heating pretty good by the time we made the summit. That beer at summit break was the best tasting  one I’d had in a long while… well maybe since the mid ascent beer break. We made our way down to the lake the excitement building with every step. 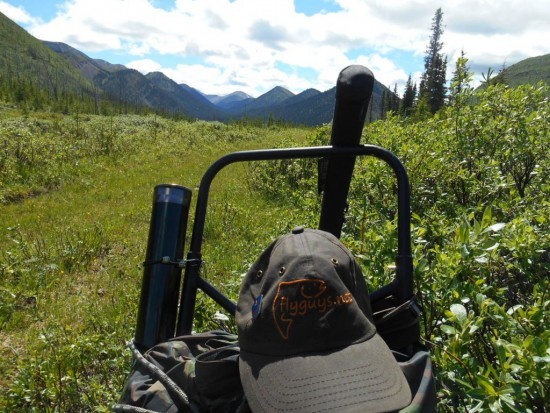 Our correspondence with the outfitter over the winter/spring had  been sporadic and ambiguous so it wasn’t until we got to the ranch that we knew for sure about the packhorses. We also weren’t sure of the duration of our trip and it was at the ranch that we were able to extend our trip 1 more day than last year. (Mon-Fri) This was what I was what I was thinking about as I got my first glimpse of the lake. A big grin came across my face and stayed the rest of the trip. 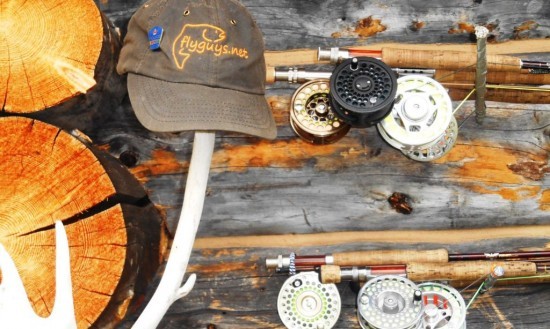 Up at the lake we slid out from under our packs, unloaded the horses and stowed things in the cabin. Sitting around having a few cool ones with the guides I noticed that the fire pit was all tore up. I looked over and said, ”Grizzly eh.”  He replied, “Nope sheep.” This didn’t quite register then he pointed way up on the mountain behind camp to a bunch of Stone sheep laying down. We all thought that’s pretty cool as we went about pumping up the float tubes and stringing rods. The guides saddled up and headed out leaving us alone. That lasted about 20 minutes then we had sheep galloping into camp. There was around 25 ewes and 7 lambs and they weren’t a feared of anything, let alone us! 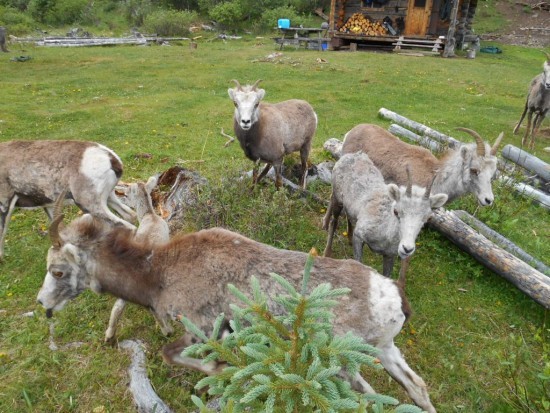 The next morning around 4:30AM I was awoken to crashing and banging on the cabin deck and my first thought was a bear was trying to get in the cabin. I cracked open the door and there was three sheep up on the deck going to town on the BBQ grill we had used the night before. Over at the fire pit  a bunch of sheep were vacuuming up all the ashes left over from the previous nights fire. They also managed to knock over some rods and broke the tip on one of Timbres rods. After that rods went on the side of the cabin and everything else was packed into the cabin at night or when we were fishing. Life’s tough in the mountains and they were looking for minerals/salt wherever they can find it. And so it went all week the sheep spending the nights up on the ridge but soon as they saw us get up they would come thundering down the trail. And that’s how the cabin got the name Mutton Manor. 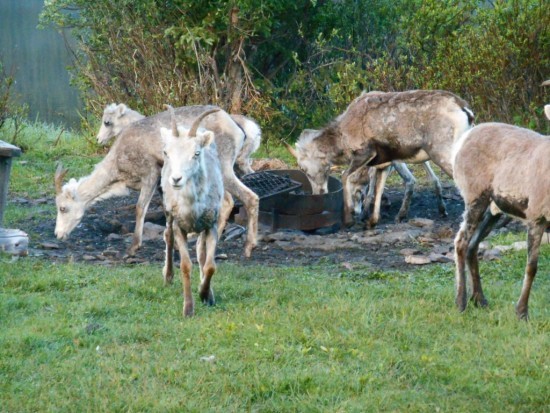 Well enough of the Disney channel crap this was a fishing trip. There had been a huge mayfly hatch last year but being two weeks earlier this time I was wondering if we’d miss out. I needn’t have worried it was mayfly heaven our whole stay.

We settled into a pretty steady schedule:

These are wild (no stocking) rainbows that fought like mercenaries in the cold water. It was good to see a full spectrum of sizes from 8 inches to over 8 pounds. We all lost big fish that may have pushed the upper limit. 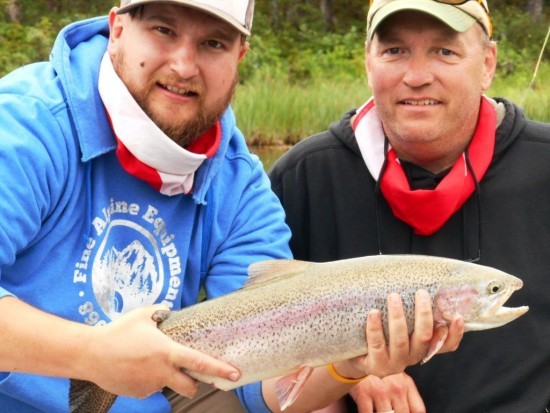 I wasn’t going to mention this but, what the hell, I donated a rod and reel to the lake. I was running two rods out of my Fishcat as I was trolling to another spot on the lake. I hooked up and played a nice fish into the tube. My other rod was a Cameo slime line with a micro gold bead maroon leech on. I had the reel jammed behind the straps on my seat and had hooked a few fish like that with no worries. Anyways I was bent over releasing the first fish when the second rods reel starts screaming. Just as I was reaching back to grab it the handle caught on the strap. The rod tip buckled down then shot up and the whole set-up catapulted up and out of reach. I didn’t have time to do anything. The last I saw my gold reel was shooting off into the depths. I tried dragging a full sink line back and forth but who knows where that fish took off to.