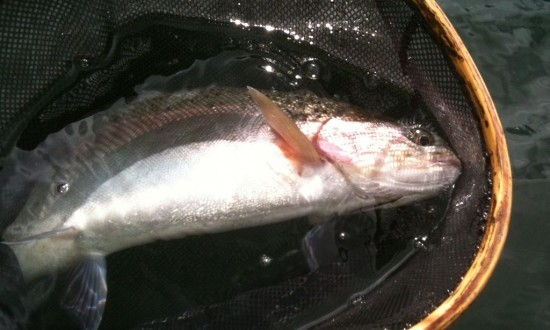 I got the email early April that a date had been selected for the GOEG IV and it was May 30 + 31. The GOEG (Gathering Of Extraordinary Gentlemen) is a get together, for as many as can make it, of all the yahoos I grew up and went to school with. Located on the shores of Okanagan Lake, at a buddies cabin, it’s a weekend of eating large, drinking hard and stories around the fire. First thing that popped into my head was that I have to parlay this into a pre-event fishing trip like Steve and I did two years ago … flyguys Northern Division Kamloops Fishing Adventure 2014! The wife on being informed of all this piped up, ”Good Maggie (dog) and I will come with you and you can drop us off at my mom’s place,” I replied that I didn’t think there would be enough room and I was only half joking. By the time I load the Yeti and all my fishing/camping gear there’s not much room. But yes, you guessed it, I made room, for I’m not a complete idiot! 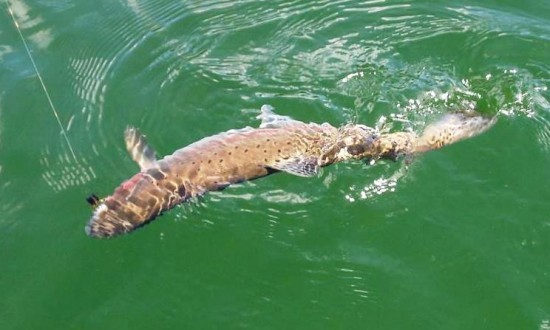 Now it was time to pick a lake. Last time down after our Roche Lake experience, on the way to Vernon, we took a trail into another lake and had some great fishing. I wanted to go back and fish it for a couple of days not hours this time. So I contacted the Fly Guys Northern Division’s Southern Correspondent (buddy Don) and ran everything past him. He informed me he had the week off and would go in a day early and set-up camp. Things were coming together nicely now. There was one problem, I didn’t think I’d be able to find my way back to the lake from the other side. So I contacted  Headquarters and asked Rob if someone could guide me into the lake. As it turns out I got the head Sherpa even though he had to work the night before, the teachers were on strike, and it was his daughter Genna’s  birthday! That Rob will fish in a mud puddle with you if you ask him. 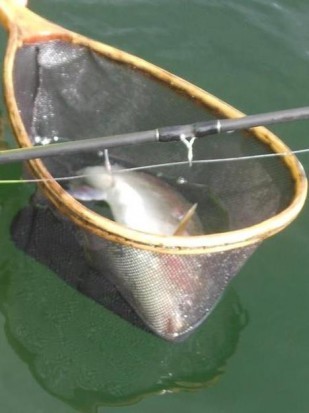 Anyways as it seems with all my Kamloops trips lately, the start was in Rob’s driveway. I voiced my concerns about the trail in as my Cherokee barely fit up that rock garden path last time. This trip I had the wife’s, big hipped, Jeep Wrangler Unlimited and I didn’t really want to hear about scratching and wrecking it the full 11 hour drive home. He told me there was several ways in and as it turns out we had taken the ATV trail last time. Before heading out he handed me 5 small plastic bags with 3-4 chironomids in each and said these all will work on this lake. The guys first class all the way.

With that we were off. When we got to the lake there were a few people camping already but it didn’t take me a nano-second to spot Don’s camp. There were enough tarps up to keep a Boeing 737 dry and lots of firewood chopped and stacked ready to go. All I needed to do was rig-up my rods and go fishing. Don was on the lake and came in as Rob dropped his pram in the water and was going in what seemed like seconds. He told us to get organized and he would do a tour of the lake to see if any chironys were popping. My rods were pre-rigged in cases so it wasn’t long and Don and I were trolling towards Rob at the other end of the lake. He had mentioned that this lake’s big fish were in the 5-6 lb class and as we got closer we could see he was fighting a nice fish. Sure enough we pull up and he’s lifting a 6 lb beauty out of his Moby to show us. 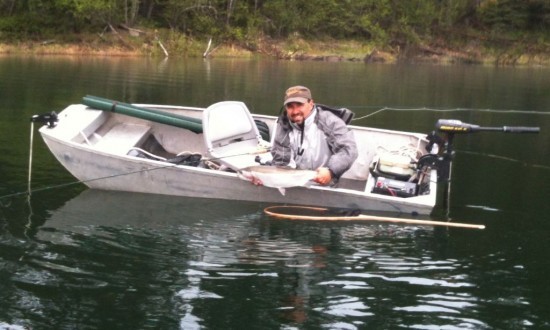 Don and I were getting ready to anchor nearby when Rob says”  No I’ll get out of the way and you guys anchor right here. Also that kromie you were asking about… the one with the black rib, start with it.” Don kinda looked at me and I just said,” Look I’m not going to argue with him!” 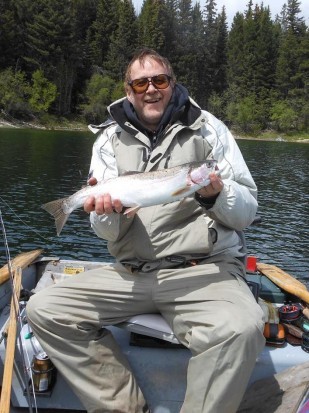 So there we were anchored in 24 feet of water, fishing a foot off bottom both of us with the kromie chironomid on. Don was getting hits and caught the first couple of fish. I got impatient and tried a few different flies then thought, stop it , put the kromie back on. Twenty minutes later I’m into a nice fish around four lbs and the lesson was learned. Don’t second guess the Sherpa.

Things settled into a steady, indicator down, fish on kind of day. Every time Don  would hook up he’d yell,” Thanks Rob” and he was yelling quite a bit. Rob had moved off to the inside of us and was still out fishing us until he headed off for Genna’s birthday dinner. As for Don and I, we never moved or changed flies and by late evening I had hooked around 18 and landed 12 feisty rainbow. 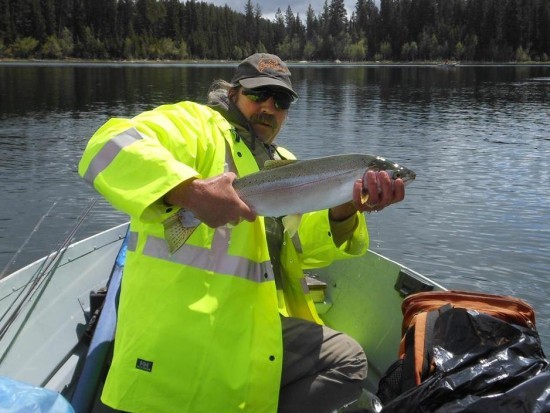 The next day and a half wasn’t nearly as good fishing probably due to the wicked cold front that moved in. I was wearing just about everything I brought to stay warm and dry ……. 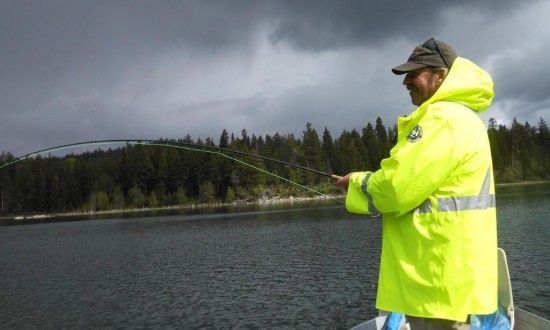 ……. Having said that, in the back of my mind I was thinking we probably would still be catching like Krazy if the Fish Whisperer was still here.

All in all awesome camping/fishing trip and all that was left was to survive the GOEG…which I did…barely. And once more because we really mean it “Thanks Rob.”