You are Here: Home >> Blog Posts >> Fishing Reports >> Storm in the Eye of the Peace!

Storm in the Eye of the Peace! 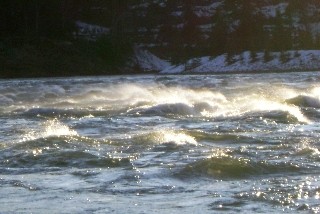 Wind Storm on the Peace River!

A couple of days before Xmas and the weather has been above seasonal for a while now so you really couldn’t call it a Chinook. Didn’t matter though cause anything above zero and we were going to try the river!

The river was running real high and there were some nasty looking holes in places. The wind was in the forecast so we knew full well what we were getting in to. The plan was to sit on one of those big holes and try and land a River Monster. Steve and I starting setting up and it felt a little like setting camp #5 on Everest. Everything had to be secured and weighted down as the wind was knocking us off balance every now and then. I remember thinking “no one out with an ice tent today”. 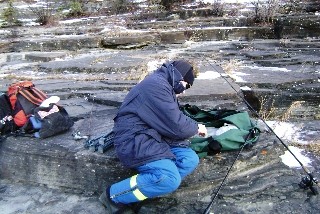 We threw everything we had out there but other than a brief hookup and some taps it was a blank. I have to say I’ve never seen the wind rip the tops of the whitewater on the Peace before! Gusts up around 80 KM 😯  made it a challenge but it would die down every now and then into a gorgeous day. We had a blast and more times than not the day trumps the fishing anyways.

To all the FlyGuys (and We Are All FlyGuys And Gals 😉 ) a great holidays and a Happy, Healthy New Year from FlyGuys Northern Division. 😀

One Response to Storm in the Eye of the Peace!