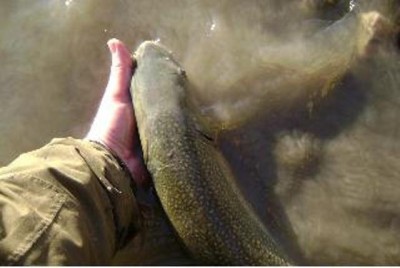 Getting skunked on the last outing of the year was a little disappointing    so the only way to change that was to make it the second last outing! With my partner in crime, Steve, in Edmonton watching the World Juniors (lucky bastard) it was going to be just the mutt in the jeep with me. The weather is still holding but colder temps and snow are forecasted for tomorrow. A couple of degrees below zero but with sun makes the river still doable even with the ever present wind.

I had come armed with some purplish UV hoochies that I had never tried before. As it turns out the wind was kicking up waves and making the water murky out to about 10ft from shore so I was hoping the UV might help. I got a lot of taps and hits on the hoochie just at the border of the murky and clean water but was not getting good hookups. I stung a few more fish and it was a little frustrating but at least they were there. I finally switched over to a hot orange spin n glo and that produced the only fish of the afternoon!

At around 7-8 lbs it came in pretty easy but once in wanted back in the river in the worst way. I took a few photos but had some sort of malfunction with the camera, most likely the tripod holding it and pushing the buttons. I did get one shot though of it heading home.

There the year is done and I don’t have to go out in a storm tomorrow!

Happy New Year everyone, time to dream of that fish, lake or trip of 2012 that’s going to make it a memorable year!