Well we couldn’t make it to the Bahamas’ this weekend for their Grand Slam so Steve and I headed for the East Slope of the Rockies for its Grand Slam. The plan was see if we could get in to fish a tributary of a tributary of the Peace River.

After 40 km of dirt road off of the highway we proceeded through a large ranch property and found a quad trail. Problem we had no quads! No problem …edged the jeep onto the trail and we were off. Actually made it 4 km before the trail veered around a swamp and down a wooded slope just wide enough for a quad. We came back a km and found a goat trail over the edge and down to the river. With a bit of bush whacking we ended up on the shore and set up camp.

From there the first day we hiked downstream 2-3 km fishing all the holes. Every corner, logjam or obstruction held fish. We were leap frogging each other in excitement and didn’t get a lot of pictures. Lots of whitefish, rainbows and grayling. We hooked 3 bulls and lost them all. This tough water and the big boys are always around logjams where they head immediately after being hooked. 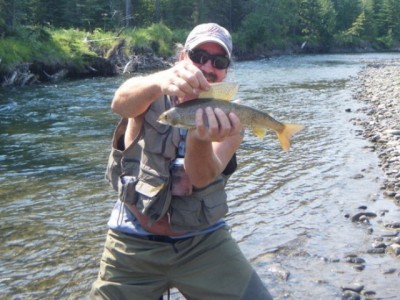 Check out the colours on this guy!

After an evening around the fire with a few Rumbies and beers it was up early and head up stream. We were both carrying two rods: one rigged with a floating line using bead head green copperjohns and the other rod was a sink tip with Double Bunnies and big saltwater flies. If you didn’t get a hit on the nymphs after a couple of drifts there probably a bull lurking in the hole somewhere and the switch was made to the big iron. It was day two that we completed the Slam and finally landed some bulls! 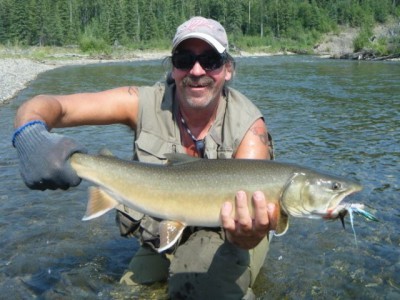 This bull completes the grand slam! 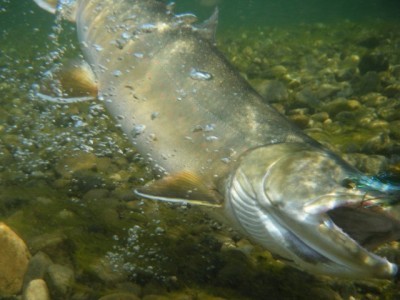 and here's a cool desktop picture of it for ya!

We were both exhausted after 2 days of crawling over rock beds, wading and climbing over massive log jams but as Steve put it,” Just plain good cross training for the up and coming hockey season. Went through a ton of flies but that’s to be expected when you’re fishing around this much lumber and shrubbery. Too much fun and we’re already planning next year’s trip back.

All of our trips pictures should be uploaded to our 2010 Gallery pages (Page 3 I think) soon so check them out!