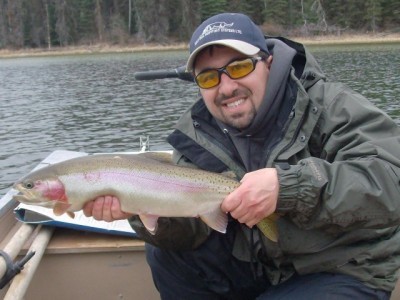 Roche lake is located about 40 minutes south of Kamloops on Highway 5A (the old Merritt highway) and was our fishing destination for today. Roche lake sits at about 3800 feet and has been ice free for no more than 10 days. For additional information on Roche and it’s surrounding lakes please see the related posts section at the bottom of this article.

The day started out a bit overcast but it was fairly warm and, best of all, there was no wind. We slowly moved along the water and when we finally found some fish moving we quietly snuck in and anchored amongst them. A quick check on the water didn’t show any hatch activity so on went the old meat and potatoes (AKA the micro leech for me and the bloodworm for JFM) and just like that we were fishing Roche lake for the first time this year! 🙂

The leech did it’s job quickly as it wasn’t long before I had a nice healthy two pounder peeling out line! Despite a gallant effort he soon came to the net where, after a few quick pictures, he was released no worse for wear.

Next up it was JFM’s turn for a bit of excitement as a strong rainbow hammered his bloodworm while he wasn’t paying attention (or should I say paying attention to something else). 😉  No problem, JFM quickly got things under control and brought the feisty bow to the net for another quick photo shoot followed by a quick check of his fly and a cast back out in anticipation of another willing participant. With two fish so fast it was only a matter of time right …..

Well, as usual for this time of the year, just when you think you’ve got things figured out mother nature throws you a curve ball and within a few minutes of our last fish the clouds rolled in, the wind picked up and the hail started flying! I remember thinking that JFM was a bit premature in donning on all of his rain gear when we started fishing but my tune was changing quickly as I watched him sitting nice and dry while I was scrambling to get my rain gear on! 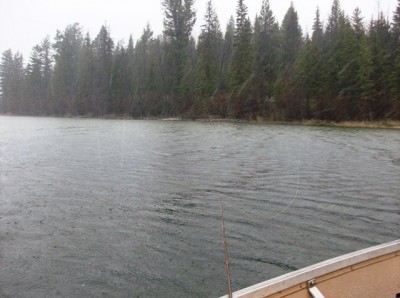 Roche Lake Storm – (picture does not do it justice!)

The storm lasted about an hour and during that time we were cold and I was wet and we didn’t even get a bite. We were almost ready to leave the lake when the sun made an appearance and started warming things back up. At the same time the hail slowed down and the wind stopped howling and even the fish started rolling again … and as a bonus, we began to see tiny chironomid pupae making their way to the surface!

So off came the leech and off came the bloodworm and on went a couple of the smallest chirony patterns that we had in our fly boxes. And wouldn’t you know it … the fish didn’t seem to care that our imitations were dwarfing the real deal and we enjoyed some decent fishing for a while!

But all good things eventually come to an end and after an hour or so it was like someone flipped the switch and the bite was off. We managed a few more hits by switching back to the micro leeches but they were not really interested and we couldn’t keep any on the hook. But that was alright … we had a fine day and were ready to get back to the truck and warm up. Besides, it won’t be long till were back again! 🙂