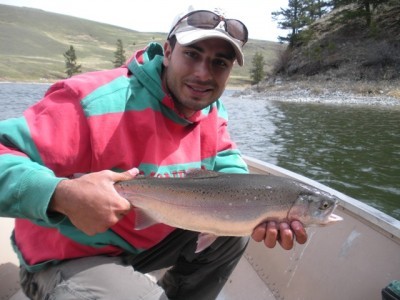 Having checked the weather forecast the night before we decided to get on the water early to take advantage of the calm winds predicted for the morning. I’ve come to the conclusion that if I had to do it all again I would be a weatherman … I mean come on … in what other job can you be completely wrong most of the time and still make a decent living!?!

OK sorry bout that … enough ranting … back to the report …

First stop was Jocko lake about a 15 minute drive out of kamloops just off the Lac Le Jeune Highway. After a quick tour of the lake to see what was happening and talk to a few locals to get the latest greatest on what’s been going on we settled into the northern most bay to try our luck. We had noticed some fish moving in the area and were amazed to find that they were in only four feet of water. By the looks of the water and the length of time that the ice has been off the lake we were convinced that Jocko had completed it’s turn and therefore that the water column would be fully oxygenated. We had heard that there was a few chironomids coming off yesterday and were looking forward to fishing chironomid pupae, in  water deeper than four feet, today! Oh well, that’s where the fish seemed to be so that’s where we fished … and with no chironomids showing we went through the usual suspects (ie. leeches, shrimp and damsels) until the wind decided that we were done fishing and convinced us to pack up and go somewhere else! We weren’t the first to leave the lake and everyone we spoke to had the same report … too windy to fish!

Our second stop of the day was Edith lake, also about 15 minutes from Kamloops but off the old Merrit Highway. As we pulled up to the lake we noticed that the wind was howling there as well. We almost pulled the plug and called it a day but at the last second we noticed a small bay that looked to be avoiding the wind storm so we decided to brave the elements and give it a go for a while.  By the time we got the boat in the water and made our way to our chosen spot we had come to the conclusion that Edith was definitely a ways from producing any hatches so we quickly geared up with the micro leeches. No sooner had we dropped the anchors and made a few casts that Adam had on a nice fat three pound rainbow! (see picture at top of post) Soon after we were into another and had missed a few as well … not a bad start but it didn’t last long as almost instantly the wind turned and blew through the bay we were in so hard that our anchors could not hold the boat! Oh well … you can’t win them all and with that we called it a day and slowly made our way back to the truck and then home.

So not so much a fishing report as a weather report but it was nice to see that the water on both Edith and Jocko has cleaned up nicely and given a nice day, or at least a decent day, they both should be fishing well. It was also nice to see that the fish in Edith seemed to have a good winter and looked fat and healthy!

That’s all folks … stay tuned cause we got the week off!