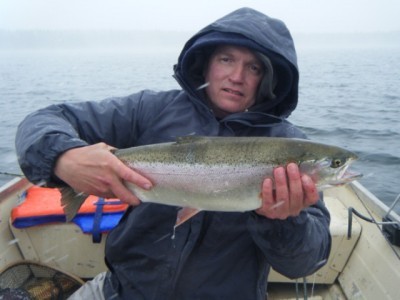 Friday June 3 take it or leave it! Oh we’ll take it alright. It was going to be my last day off for June. What to do…what to do. As if I even had to ask the question we’re going fishing! 😀

Steve picked me up Thursday evening after work and we headed out to base camp. We’d been having some real nice summer like weather in the low 20’s C but The Weather Network was saying a low front was moving in. Not that I put much faith in weather predictions but a little cooler and light rain no problem as long as it didn’t get windy right? Thursday evening as we rigged new leaders and fly’s at camp we fired up the propane heater to take the chill off inside. We discussed the plan for the next day over a few wobbly pops and whether or not the big boys would still be in the shallows. Friday morning broke grey and drizzly but not too windy at camp, perfect, off we go. 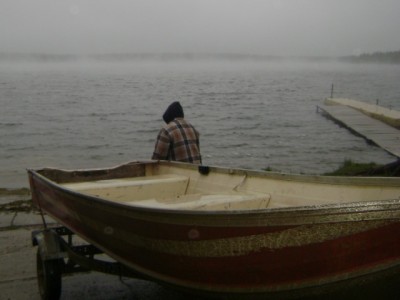 An hour later we reached the lake and appeared to have it all to ourselves. I say appeared as the low clouds seemed to be touching the mist rising off the lake making it impossible to see all the way across the lake. After rinsing out all the mud that landed inside the boat on the way in we loaded it and were off. We trolled across to the far side to the Bay of Pigs but with the waves you couldn’t see if any fish were moving in the shallows. The wind and rain picked up a little and the temperature dropped to around 3C so we decided to troll the drop off. It wasn’t long before Steve hooked a nice plump brookie but by the time he landed it, removed the hook got the photo and released it his hands were frozen. 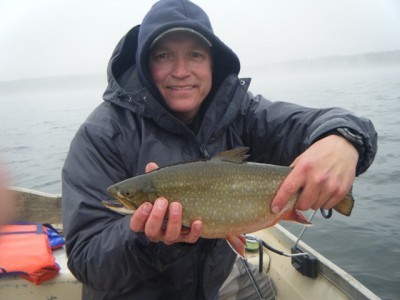 He warmed them up with the water discharged from the outboard. Man there has to be a some way of using that heated water through a coil or something for warmth. Anyways back to fishing, it got a little colder and windier and rainy so we knew it was troll or nothing. As the rain turned to sleet Steve hooked and landed a 15” rainbow. We lasted 3 hours then headed to the truck to warm up. Round two lasted 2 hours with Steve catching a nice 4-5 lb. rainbow and I landed a couple of bows 16”-18”. The sleet had turned to snow and the 15-20 km winds were driving it sideways pretty good.  😯 Did I mention we had the lake all to ourselves. Not too many fools out this day. Or should I say only two fools out this day!

On the second warm-up at the truck we both nodded off for a nap or was it hypothermia. I remember opening my eyes a couple of times and the snow had really picked up. It was now sticking on the ground and in the trees. It was 5:00PM and we made an easy decision to load up while we were still warm. 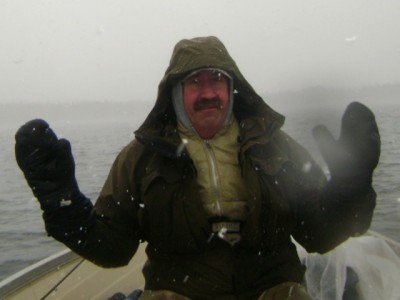 The whole day was spent trolling the edge of the flats where the water goes from 4ft to 15ft. zigging and zagging on and off the flats. Steve had switched earlier in the day (while fingers still worked) from a black bunny tail bugger to a Don Baillie Red Bastard Dragon which he caught all his fish on. We were both using sinking lines and I had on a Cactus Muddler on which I hooked my rainbows. The one rainbow I kept I cleaned on the boat and it hadn’t been eating much lately. Other than green mush the only other thing I could identify oddly enough were some tiny water boatman. I’m talking something you’d tie on a size 16 hook.

Our next fishing report will be in July so everybody please keep the fishing reports coming as I will be living vicariously through you as I’m stuck on Graveyards. 🙁