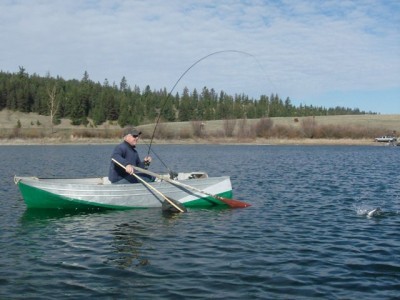 Hard to believe another year has gone by but here we are again at our annual CEP fishing derby  and,  as the title of this report states, this years host lake was Edith!

Edith is a little gem of a lake nestled in the grassland hills behind Knutsford just a mere 15 minutes or so from Kamloops. Edith sits at 3370 feet in elevation and it’s rich waters are known to grow fish fast! Edith is stocked with both rainbows & eastern brook trout, both of which tend to look allot like little footballs due to the abundance of feed in the lake! Edith lake is known for it’s huge gammarus shrimp, gigantic bloodworms and bomber chironomids.

Unfortunately for us, Edith lake summer killed a couple of years back and therefore the majority of the fish there today are only two year old stock and therefore topped out at around the three pound mark. Don’t get us wrong, there’s nothing wrong with a three pound bow,  but cross your fingers that the lake survives for a couple more consecutive years and you can easily expect to be pulling out lunkers in the six pound plus range!

Despite the spotty weather, including the hail storm around noon, the fishing today was fairly consistant. Trollers were hammering fish steady with leech and shrimp patterns while the casters were sparatically successfull with leeches, bloodworms and chironomid pupa patterns. As usual, we were successful with both the black n red & kkk chironomid patterns as well as the Triple F leech tied as a micro in red. With over thirty participants on the water, many of them very decent rods, the top fish produced just topped three pounds and was caught on a bloodworm pattern – congratulations Doug!  🙂

Although chironomids were hatching fairly well through out the entire day, the fish were not on them heavily – you can expect that to change shortly. Our prediction is that the hatches will continue to grow stronger and within a week the fish will be keying in on them almost exclusively – at least for a while.  Keep your eyes open for the bombers and if you see them ignore all the little stuff and long line a big pupa pattern on or near the bottom – you won’t be sorry!  😉

A big thanks to Bob & Peeler for setting up the event (yet again) and to everyone that participated – it was allot of fun! Pictures will be posted on our 2010 Gallery page soon!