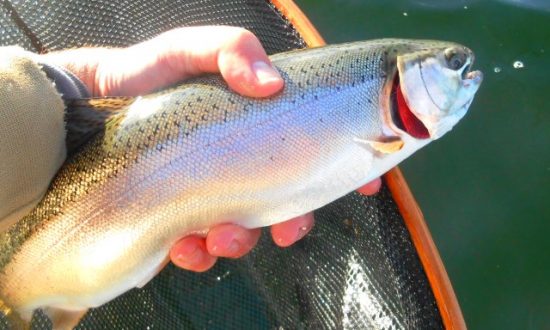 I was required to work one day this weekend, on ERT (Emergency Response Team) coverage, and was given a choice on which day it would be. I told them I’d have my answer in a couple of minutes … and off I went to the computer to bring up ‘The Weather Channel’. I was really hoping to get the boat out a couple more times this year before putting it to bed for the winter, and realistically that meant only two, possibly three, more weekends. So the two choices were Friday with highs of 1C, 12 KM winds gusting to 18 KM, and snow flurries OR Saturday with highs around 9C and 35 KM winds gusting to 44 KM! Cold I can dress for but the wind is out of my control so it was a no brainier …  I’ll take my chances with Friday the 13! 🙂 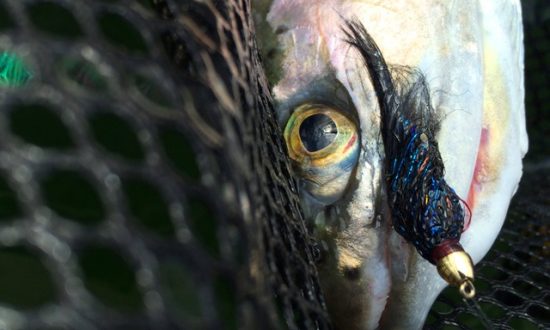 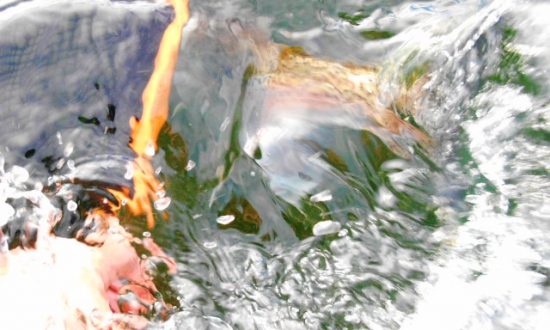 I got to the lake and it was one of those days with very low grey clouds, misty, light snow and you half expect to hear a foghorn echoing in the distance. I could see that the middle of the lake was occupied by hundreds of migrating ducks and above the clouds I could hear the honking of flocks of Canadian geese getting’ the hell out of Dodge.

The Jeep said it was minus 7 C and my first problem was getting the plugs into semi frozen ports on the boat. Nothing that a bic lighter and singed finger wouldn’t take care of. I strung my rods, (full sink, intermediate and floating) bundled up and was off, thermos at the ready. I had a few taps on the intermediate line with the cactus muddler trolling across the lake and thought at least they are active. The plan was to set up way into the weeds on the flat and run the indicator with a small leech, as Timbre had a beauty straighten out his hook in there three weeks ago. After an hour, with not a nibble, it was back out to the drop off. With no action there I trolled over to some flats in a wind protected bay and hung a leech out. The winds were swirling in there so I didn’t anchor I just let the wind move the boat back and forth. This finally produced the first hook up but what turned out to be the biggest fish of the day raced through the weeds and off into the sunset with the Little Wino leech. 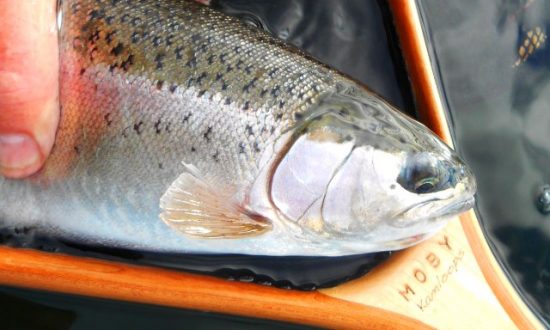 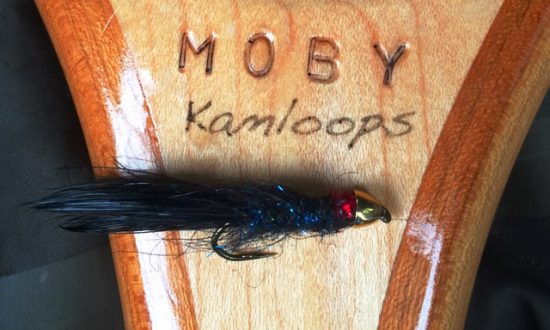 The rest of the day was spent trolling, casting and wind drifting a Midnight Blue Cop Car leech that produced six fish, none over 2 pounds. When I pulled the boat out the Jeep said it was Minus 1C so I put in a full 8 hour day freezing my hands but I did get some tugs. One final thought, does geese honking sound like laughter or is that just me. 😉