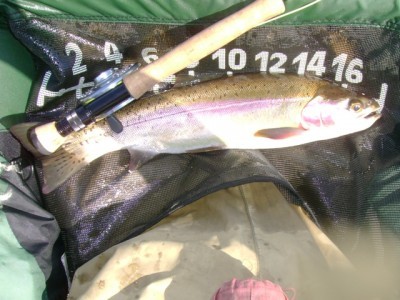 A Spunky Chunamun Lake Bow on a Disco Muddler!

It was time to head up to Grizzly country so Steve and I headed into one of my favourite lakes over the years Chunamun (formally Chinaman) lake. This little gem is a 43 hectare lake @ 3000’ tucked up against the East slope of the Rockies. It’s close to a 2 hr drive North West  of Fort St. John. Most guys quad in the last 6 km but I wanted to put the jeep through its paces! We made it to within a couple hundred yards of the lake and decided to walk 2 minutes instead of driving through the last 5 big holes. Hate to risk fishin’ time for digging out time.

The morning was pretty non-stop with mini leeches/chromies and damsels under indicators in 6 -10 ft. of water. All fish caught were 16”-19”,didn’t locate any of the silver bullets 20” plus. I found this odd as you always hook into at least one. I later read they had stocked the lake the day before with 2500 yearlings. I’ve often wondered what the effect dumping this many fish into the lake has on the residents. Possible it pisses off the big ones for a few days.

Anyways around noon I was going to shoot straight across the middle of the lake to check on my dog so I put out an intermediate sink with a Cactus Muddler (disco version). While hightailing across in my tube started getting vicious hits and landed 3 of the bigger fish of the day. Same thing going back so stuck with the intermediate and muddler the rest of the day and did Wonderbar. 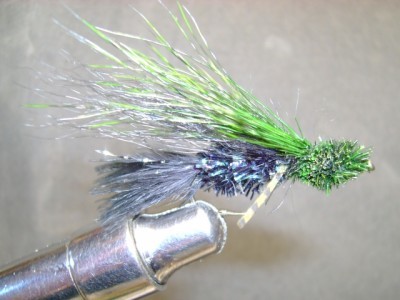 Check out the fly tying category for tying instructions for the Disco Muddler!