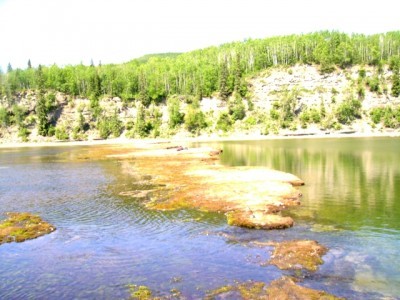 Nobody around to go fishin’ and the jeep in the shop means it’s off to the Mighty Peace River to fish around Hudson’s Hope. H.H. is about 1 hour drive west of FSJ. And the highway parallels  the river most of the way.

I could see the river was very low (controlled by Peace Canyon Dam below Bennet Dam) and being mid morning the chances of staying low for awhile were good. That meant only one thing … head to the Fingers.

The Fingers are shelves of rock that jut out into the Peace from both shores downstream of Peace Canyon Dam for a km or so. The last set is my favourite and is usually under water. I hadn’t got out on them for 4 or 5 years so when I saw them exposed it was pack up and down the cliff (no small feat in itself).

As you can see by the photo above you’re 250-300 yards out into the middle of the river. The picture is mid afternoon when the water came up 8 inches in 5 minutes. At this point I had everything packed and ready to bolt as you never know when it might rise a couple of feet just like that! As it was the river remained at this level and I fished to 8:00PM.

It was a perfect day fishing barefoot wearing nothing but shorts and a beer. Caught over 30 a mix of rainbows and whitefish on caddis pupae, stonefly nymphs and black ant. I was excited because when there’s this many fish usually a big bull trout will crash the party and I had another rod rigged with a VI sink tip and Double Bunny fly waiting. I’ve had 15lb bulls chase little whitefish right past me in 8 inches of water before and believe me you better have a strong heart when that happens! 😯 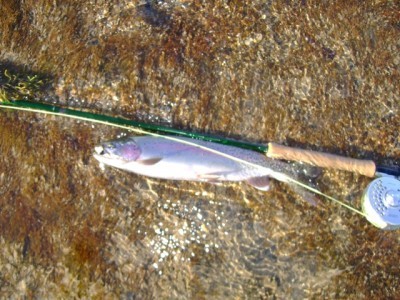 Today though was just a beautiful day in a beautiful river …  what more can I say. Better enjoy it before they build Site C Dam and destroy an awesome fishery. More on that another time.

Species available in the Peace River:

That’s all for now folks.