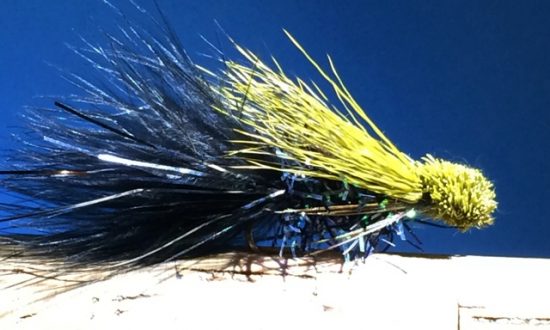 The “Disco” cactus Muddler has always been a producer for me and has caught fish everywhere I’ve used it. It is a go to fly for me because I have confidence in it and I’ve learned how to fish it in different situations. It works as a dry fly, on a slime line and especially on a full sink line  deep or along a drop-off. Many moons ago I spent a whole summer/ fall fishing just it and a micro black leech with a gold bead head. They were all I needed to catch trout in a bunch of different lakes.

I suppose another reason for my love for the muddler is that it was the second fly I ever tied. I got a minimal fly tying kit from the wife one Xmas and on Boxing Day I set up shop in the corner of the basement to create some beautiful flies that would be irresistible to the fish! The first fly ( like most new tiers) was a Wooley Bugger. My next fly was an attempt at using deer hair. Sad as it was I put it up in front of my vice and kept trying until I got flies that looked better and would stay together. That fly has remained up on the 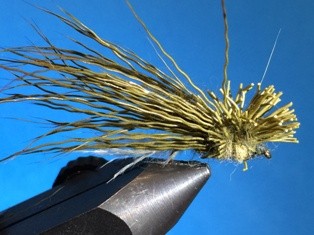 cork board behind my vice ever since to remind me that you can always get better at tying a pattern. Best it stays there as I think it would fall apart if I ever tried to cast it!

One of the biggest Rainbows I have ever caught ( guestamation 15lbs) took the fly off the surface right beside my canoe. I had a bunch of line piled up on the floor of the canoe so I tossed the Muddler overboard and as I was sorting things out I heard, what can only be described as a big slurp.  I looked over at a huge depression in the lake surface and then all hell broke loose. Was actually extremely lucky not to tangle or tip the canoe as I tried to get my feet out of the way as the line ripped out of the canoe.

Techniques to use vary from sitting on bottom with the odd twitch like a booby to casting with a sink/slime line and stripping in as fast as you can. Takes are rarely subtle although sometimes you will get the continual peck, peck, peck, which calls for a speed up or slowdown of  the presentation.

Wonderbar trolled slowly on an intermediate line! Check out our Chunumun lake report for more info!

I’m not guaranteeing that this is a wonder fly but Rainbows and Brookies do love it so crank some out and givem a try.