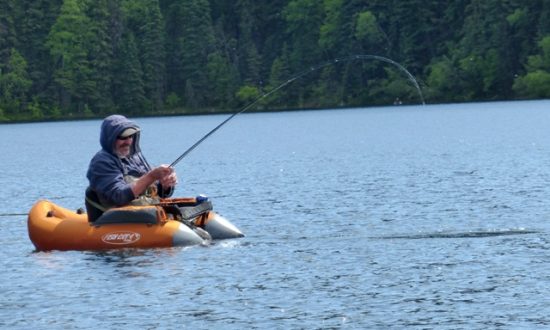 “Go north young man, go north.” It’s been over 38 years since I heeded those words and I have to tell you I’m glad I did. There is a lot of territory farther north that still calls me but lately I’ve been hearing a faint echo every now and then “ Go south old fart, go south.” So periodically I must subdue the voices and head back to the home stomping grounds. Back to my natal valleys, back to my home waters, back to Rob’s driveway and May chironomids. I fully expect one of these times a request to sign a timeshare for in front of his house! I think the jeep spent more time there than anywhere else in Kamloops that week.

I was fortunate that both Rob and JFM had the week off and were in full tilt “May Chironomids” fishing mode. It’s not often that one gets an inside peek at the life of a chronie addict. These guys chase the chironomid hatches from the first lakes to ice off, up in elevation then North, doubling back south for Bombers or specific  hatches. As for me I just smiled , tucked myself into the truck seat and was along for the ride.

The decision had been made the night before so morning found us heading up the Yellowhead, turning left at Little Fort and heading up into the Cariboo. There was a couple lakes that got narrowed down to one on the drive there. At the lake I was once again in awe at how fast these guys get there boats in the water, loaded and on their way. I was fishing out of my tube so by the time I got over to where they were anchored fish were already being landed. Rob, as per normal, had given me a small bag of assorted chironomids and said “ yea these’ll work.” I anchored close by and had a front row seat for what turned out to be the JFM Show. 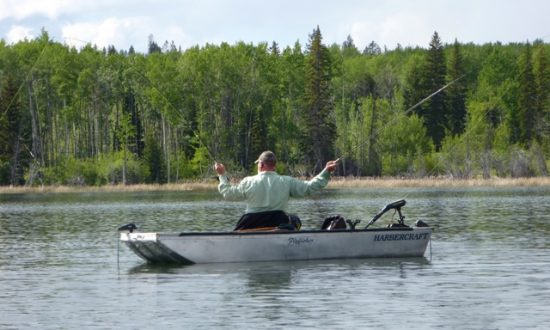 I lost track of his double headers. I was beginning to think his rods weren’t straight but actually had a permanent bow to them. I’m sure he didn’t have enough time to get a
sandwich in and I was thinking “that’s my kind of diet”! 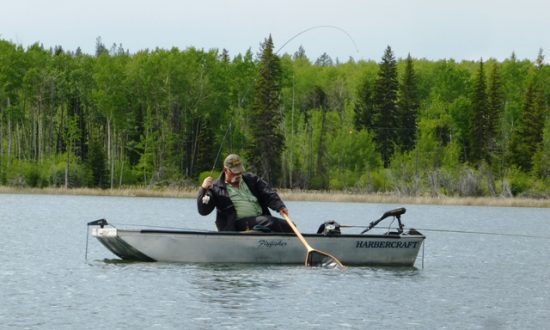 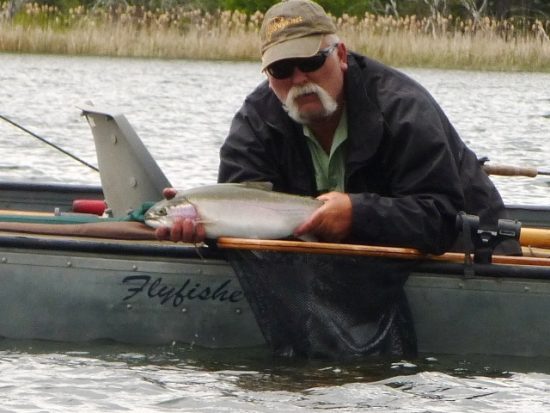 Rob was slaying too and it was wild listening to these guys almost talking in code with all the fly pattern names they were throwing around while trying to stay in sync with the size and colour of the chironies as things changed on the water. 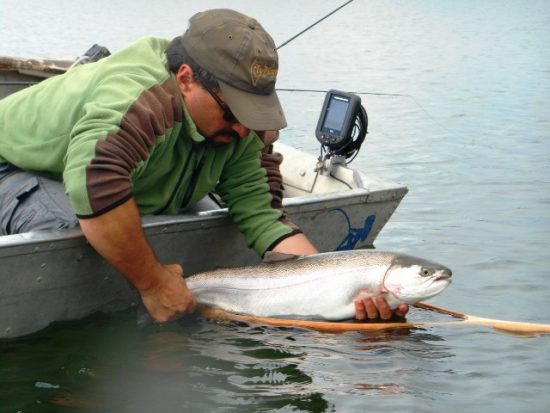 Fortunately for me I was getting texts explaining what to switch to for the cronie patterns that I didn’t know the names of, which was quite novel as where I fish up North there is never cell service. I used the intel to land a few a nice ones myself. 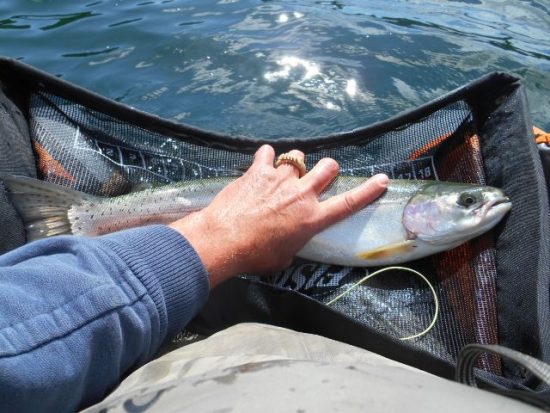 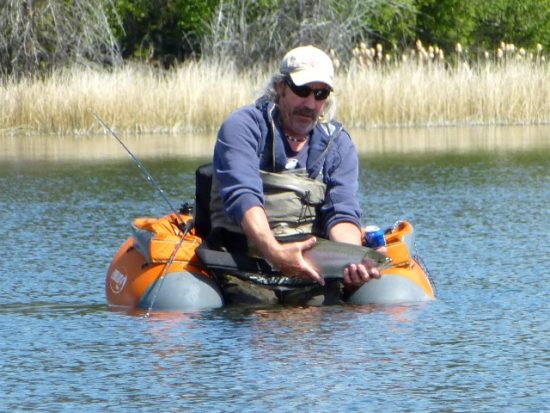 On the way  home I quizzed the boys on what I could be doing differently to increase my hook ups and after a bit of discussion it was determined that some leader work was in order to ensure my fly was in the zone.

And that was it for day 1 but I have to add that a good chunk of the 2 hour drive home Rob was in the back seat texting guys who had been fishing that day getting us live intel on some other lakes options for tomorrow!

Based on the texts the night before, we headed up to a lake just outside of Kamloops. Once out on the water I could easily see why. The information we got was there was a heavy evening hatch and as a I kicked out into the lake it was littered with cases. John had a guy from work with him and was anchored up on the near side of the lake while Rob was doing a tour scouting for bugs. As he passed me he said he was thinking of setting up on the far side so I continued across the lake until I hit a patch of popping bugs. Set anchor, set depth (28’), put on one of Rob’s flies, cast and pop open a beer. A couple sips later a 14” rainbow launches beside my tube and spits the hook. A good start and what I realized later was I was anchored on the sweet spot. I caught a lot of fish. I caught a lot of big fish with a rough  guestimation average size of 4 lbs. Rob comes by and asks me which fly I had on. I cast over to his boat and he pulls the fly in to have a look. “ Fak that’s a prototype, I don’t have another.” I’m pretty sure I didn’t rip the fly out of his hands but I’m not sure. I caught enough big boys on that fly that I bent it back into shape twice after battles. Good ‘ol Togen hooks! The 8 plus pounder made my trip. I even caught a keeper for the Mother in law trolling back to the boat launch dragging the indicator with 8’ of leader and the HOT FLY! 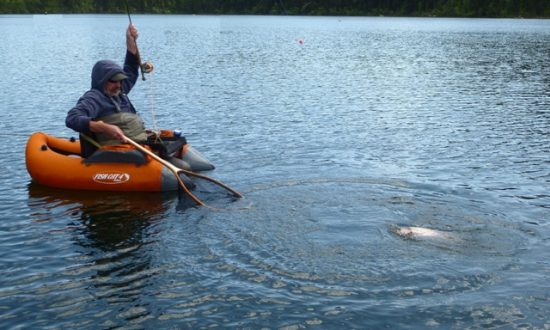 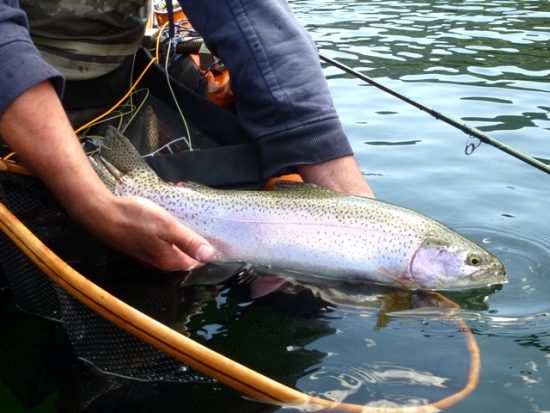 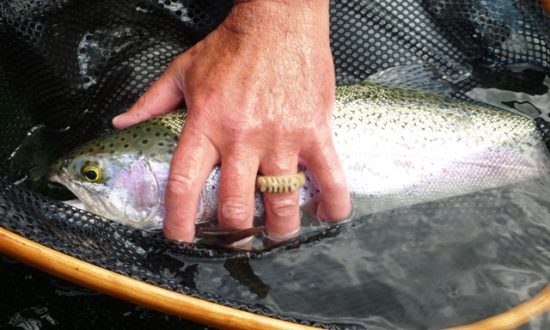 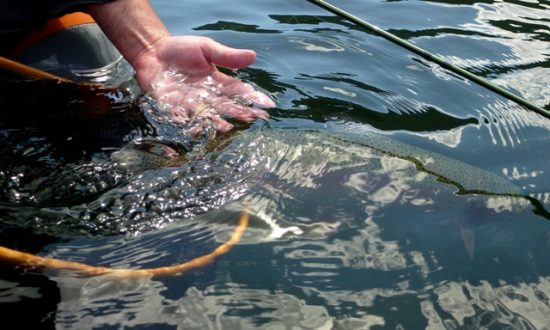 *editors note … Gord talks a good talk of his success being attributed to “the prototype” but don’t be fooled … this guy has forgotten more about fishing than both JFM & I know and his positioning and presentation were more likely the reason he was top rod (by far) on the water that day!  😉

Back up to the Cariboo and something I been wanting to do for a couple of years ever since I heard about Deep Sea Chironomiding. John, Rob and I took 2 boats and set up smack in the middle of the Sheridan Lake deep water. I’ve thought about this for a while and I’m not sure how a fish can see a size #14 fly, let alone rib colour, at that depth. I had brought a fat olive green ribbed chirony fly I call the isotope because of the glow bead head. So on it goes with a type 6 sink line and off to the bottom. It did catch the first fish then nothing. On one of Rob’s fish we pumped the throat to have a look see. It had just started on chironies but had been dining on green shrimp about the size of my fly. But since they were turning onto cronies it was off with the Isotope and on with #14 kromie! 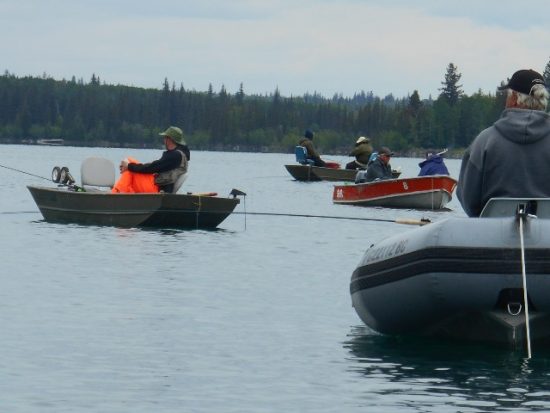 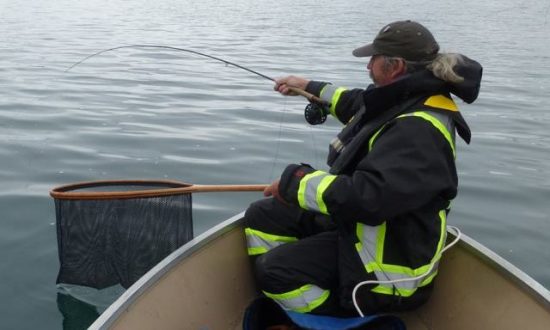 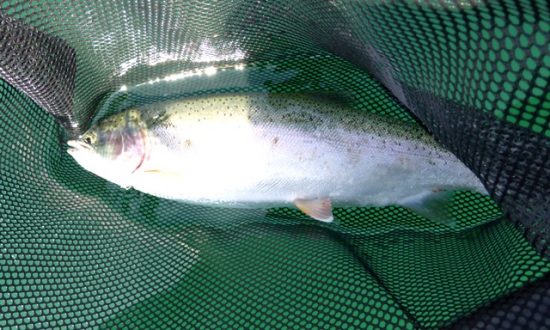 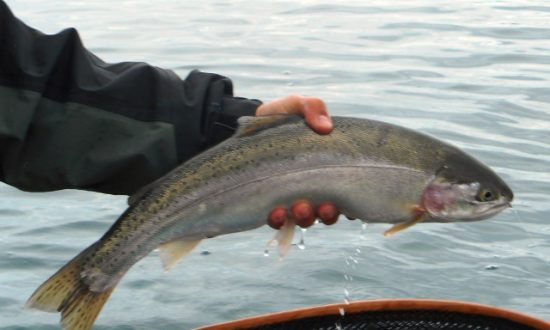 We had a blast with fairly steady action between the 3 of us until a storm blew everyone off the lake. Rob and I were the last ones  in the whitecaps and driving rain as we were giggling and still hooking fish. 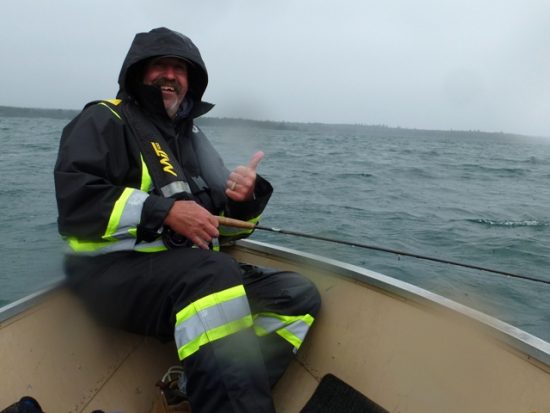 Where did everybody go ???

Three awesome days of fishing with the Home Office Charters. I want to thank the boys for great fishing, great company and great times. It was time to head home and prep for the pack into a mountain lake.