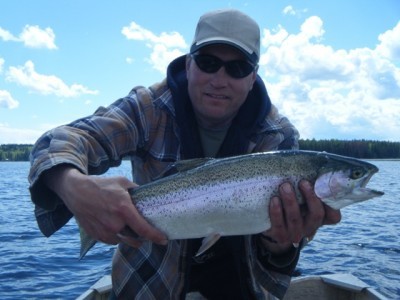 Once the hoards had moved on after the long weekend and all the snow had melted Steve and I headed out mid week hoping for  a bunch of brutes. When we got to the lake we were caught off guard  as it looked like it was turning over. What had happened was all the wet snow( 4 inches) had broken off all the dead reeds and now they were scattered all over the surface. The fishing once again mirrored what was happening around Kamloops..tough sleddin’.

We only landed three although I snapped off three on 6lb tippet moved to 8lb and snapped off a couple more. Reports from guys on Thursday and Friday were dismal so it seems this trophy lake has returned to it’s stingy ways. I’ll head back near the end of June for the massive Travellers sedge hatch. 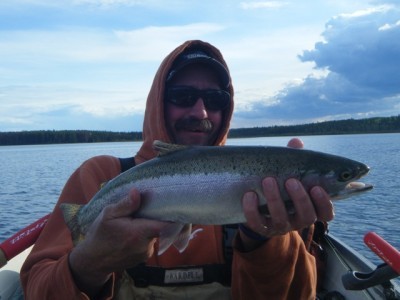 The one fish we kept I cleaned on the boat and it was stuffed with 25-30 dragons. Kicking myself for not taking a picture of all those dragons on top of my cooler. We got all our hits on dragons and mini black leeches.

Anyways reports  from now on will be from rivers, creeks and lakes with names.

Flyguys Northern Division over and out.