Steve and I headed out to fish the Fingers on the Peace River the other day but Hydro had other plans.  The river has been running very low the last month and silly us assumed it would remain so because of the drought conditions here in the North East. Whether it was the big high pressure system down south and the warm temps requiring more power for the air conditioning I don’t know. What I do know is the river was running wild and high so we went to plan B.

We headed to Alwin Holland Park which is just up river from Hudson’s Hope. The water level allowed us to wade out and shelter by a big rock next to some good white water. There was some nice slack water next to the riffles and it was down this seam we drifted black stoneflies and green (caddis) rock worms with a fair bit of success. Nothing huge but all fish caught put up a hell of a fight in the cold water(low 50”s F). 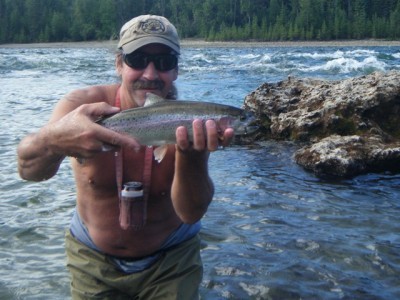 We’re heading for the mountains this long weekend and hope to have a glowing report next week.

As usual all of our trips pictures will eventually hit the 2010 Gallery pages so check em out!