Well after what seemed like forever the whole family finally managed to coordinate a few days off together. As we don’t get opportunities like this very often we decided to minimize travel time and head up to good old Roche lake for a few days of camping and fishing. Not even an hour after departing we arrived at our destination and the boys wasted no time getting out on the water for an afternoon fish! 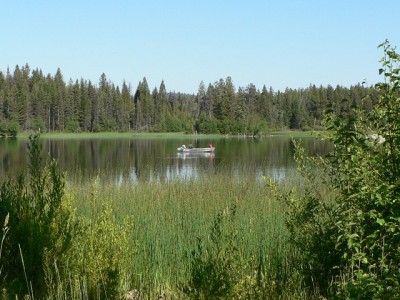 Once camp was set up and things organized and cleaned up I set out to try and accomplish the goal that I had set for the trip – to get my daughter Genna her first fish!  Genna was very excited as she knew that we were going to be spending as much time as we could on the water in this pursuit and, as she let me know over and over, she reallyyyyyyy wanted to catch a fish!

The plan was to slowly troll around with a fly rod loaded with a type III sinking line and terminating with the good old Triple F until we could determine what, if anything, was happening on the water. The hope was that we would run into a hatch of some sort, hopefully some caddis activity, or at the very least locate some moving fish and work a leech or something through the zone.  Unfortunately, the heat must have taken its toll as the water was completely dead.  Oh well, there’s a lot worse things in life than rowing around a beautiful lake with my beautiful daughter … even if the fish weren’t biting. And besides, she kept me thoroughly entertained with her renditions of “I want a hippopotamus for Christmas” and Rudolph the red nosed reindeer”. 🙂 Yup … that’s right … middle of summer and she’s belting out Christmas carols. Not hard to tell she’s seven eh!

Anyway, after an hour or so of non stop non action I decided that we would go in for dinner and perhaps try our luck again in a couple hours when it was a bit cooler. Then, as I was just about to turn the boat around, it happened! 😯 The rod bent over, the line took off and Genna started yelling that “she thinks she’s got a fish”!

OK, this was it! Time for some good old calm and collected coaching to help her land this puppy! Well I got to tell you, I’ve caught a lot of fish, a lot of big fish even, and although it’s exciting I’ve always managed to keep things under control, but this time  I don’t know what happened and for the life of me I’m not sure how she even managed to land that thing with me shouting incoherent directions like I was!

Finally, after what seemed like forever of course, the brute was at the boat and I slipped the net into the water where Genna, almost like she had done it a thousand times, expertly slid the monster into the net!  When my heart started beating again I looked up and saw a look of pure joy plastered across her face, an image that I’m sure will remain in my mind forever! And just in case my mind doesn’t cooperate, we snapped a few pictures as well! 😉 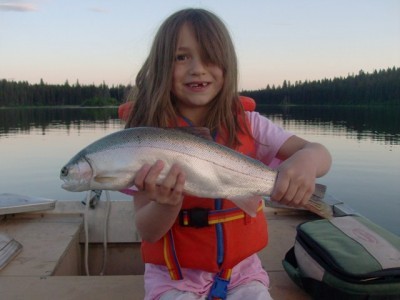 Genna’s first fish! What a beauty!

Well my work was done and at this point it didn’t matter if we caught another fish or not so we decided to pack up and head for camp where Genna could show off  her prize and share her very own fishing story with her mother and brothers!

The rest of the trip was both fun and relaxing but this is Genna’s story so, other than to tell you that Genna caught the biggest fish of the trip, we’ll stop it there and save the rest for another time. In the meantime, more pictures can be seen on our 2010 gallery pages.