If you’re reading this article, you may be shaking your head in disgust of the fact that these atrocities have made their way into Canadian waters, be very intrigued as to what these goofy looking flies are all about, or have already had a chance to fish them and realize how incredibly effective they can be. Here’s a bit of booby fly history and, for those that choose to use them, some “how to fish em” intel that is sure to flatten the learning curve. 😉

Going back 30-40 years to its inception, the booby fly was originally tied to imitate emerging insects. The foam “booby eyes” were designed to imitate the air bubble most insects use to aid in their ascent to the surface, which would also be visible while they were trapped in the surface film working their way through to hatch.

So yes this fly was originally created to represent insects (specifically insect emergences) but as time flew by the variations began, took hold, and eventually transformed and regulated the booby fly to the attractor category. Yeah you heard that right, perfectly useful, natural boobies of the past now nipped, tucked and, dare I say, augmented, to enhance their attraction factor. hmm ……. ok moving on …….

The attractor style booby fly pattern, usually tied with a big marabou tail and bright chenille or fritz body, became incredibly popular in the UK.  Although you can “booby” most any traditional trout fly pattern (damsels, dragons, leeches, nymphs), the attractor style booby fly has pretty much taken over the game, largely due to the predatory nature of trout & the booby’s ability to entice them to strike … fish do not like these things and will attack them when they see them.

The booby fly became so adept at catching fish that the foam booby eyes were actually banned from many reservoirs and stillwaters in the UK. At that point crafty anglers once again began the with modifications and it wasn’t long until the “FAB” was born (Foam Arse Booby). Originally tied as a replacement for the booby, the foam arsed blob used a rearward placed chunk of foam to basically follow the same  principles that made the original booby fly so effective … except in reverse.

As progressions continued the foam was eventually omitted from some of the patterns and eventually a third flashy tailed bright bodied UK fish magnet was developed … AKA the “Blob”. The blob fly follows the same basic principles of the booby fly but is fished a little differently. Like its predecessor , the booby fly, the blob quickly became another incredibly successful fly pattern.

Fishing secrets are hard to keep from spreading like wild fire at the best of times. Factor in the extreme effectiveness of these two fly patterns with today’s communications at the speed of the interweb and it wasn’t long till the whole fishing world was a buzz with thoughts of boobies & blobs dancing around in their heads! Canada, blessed with some of the best trout waters in the world, certainly wasn’t spared, and just like that the invasion was complete! 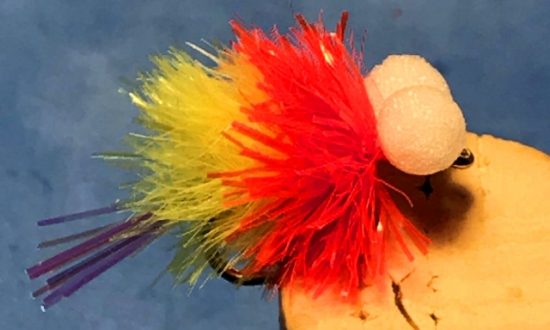 Now that we have a basic history of the creation and development of the booby fly & the blob fly patterns, let’s talk about how to fish them! Although there are a varying “global” methods allowing  for multiple presentations, we will focus on the single fly technique as here in beautiful British Columbia that’s all we are legally allowed to fish.

The booby fly is a fairly simple pattern to fish. It can be fished in all parts of a lake, in both shallow water and deeper water. Regardless of depth, the style is similar.  In the BC Interior stillwaters, you’ll want to start with a 9ft – 10ft, 5 – 6 weight rod, something that allows the pattern to be cast fairly easily and has a little backbone to it as the take’s are not exactly subtle … fish hit this thing like a mac truck! You will also need a fast sinking line, a number 6 or deep 7 line are my go too’s, and to the end of that line I like to use an 8lb leader of about 4 – 6ft. In shallow water the leader may even be reduced to 3 feet.

What we are trying to do is use the fast sinking line to drag the booby fly under, even letting the line lay on the bottom, while taking advantage of the foam in the booby eyes to float the fly up off the bottom. Using a short leader will keep your fly in the bottom 1-3ft of the water column and, more importantly, keep it in front of the fish.

Erratic movement is what your looking for with the booby fly. Retrieve the booby fly with quick strips 1 – 2 inch short strips, longer 4 – 6 inch strips, or a fast figure of eight hand twist. Keep the booby fly moving in the water as action is the key! As always, play with your retrieves and don’t be afraid to change them up from time to time.

As hard as it might be to do so, as it is quite contrary to most of our BC Interior stillwater retrieves, try to shy away from pausing to much. If you do pause try to keep it to a minimum of just a second or two. This is because if the fish following the presentation strike on a pause they tend to take the fly deep. I like to release these beautiful fish after catching them and keeping the booby fly moving helps to prevent these deep, harmful takes.

If you find yourself on a clear water lake with large shoals the booby fly can be a super fun sight fishing pattern. Drifting the shoals looking for unsuspecting trout is always exhilarating and being that the booby fly is so bright and buoyant it will grab a trout’s attention pretty quickly. Cast the fly out front of the fish your targeting, give the line plenty of time to sink, and then start working the fly back in the quick choppy manner described above. Alternatively, wait until your fly line is laying along the lake bottom begin to retrieve as you see fish moving into the area. Watching how quickly trout notice, respond and strike the booby fly when presented in this manner is an awesome sight to see!

As mentioned, fishing the booby fly in deep water isn’t much different then in the shallow shoal water, but a few different options are available. One very successful option is to anchor on the shoal right near a drop off and cast the pattern out into the deeper water, let it sink, and then quickly strip the booby up the drop off.

Or, simply anchor out in the deep water depending on where you think the fish might be. Dissecting the water column can be a very important part of fishing the booby fly and this is where the countdown method can be extremely helpful to determine the depth at which the fish are cruising. Counting the sink time on your fly will allow you to cover the water column pretty effectively and when you hook a fish you should then be able to repeat the process by waiting the same amount of time to begin your retrieve after each cast. As with shallow and drop off booby fishing, alternate retrieve methods and speeds until you get dialed in to what the fish seem to like.

For those interested, here’s my tying video for the Booby Fly …

Don’t want to tie your own Booby flies … check out our boobies here! 🙂

The blob fly can be fished in exactly the same ways as the booby but personally I tend to use the blob more in shallow water and switch my line to a clear intermediate sink. This can be beneficial with super picky trout, especially in clear water on shoals. Using a slightly longer leader of about 5 – 7 feet and having the clear intermediate line will allow you to entice even the pickiest of trout as the longer leader and clear line just add to your stealth factor and give them one less thing to see or shy away from.

Another technique is to fish the blob fly static below and indicator. On a windy day, using that wind to drift a blob fly in the shallows, or out in the deeper water, can help turn a slow day into an extremely productive one! On a windy day the erratic nature the choppy water  can enact on the blob fly works just like another type of retrieve, but with a whole lot more hang time and a whole lot less casting!

The honorable mention, and my preferred pattern for the indicator set up, is the Daphnia blob. Although not exactly a true representation of the natural daphnia, daphnia fritz is a neat material that comes in colors similar to the little bugs and can in fact imitate a bunch of them together. It has helped me to have many memorable days on the water catching fish and is something that I would recommend.

Here’s my tying video for the Apricot Daphnia Blob …

Don’t want to tie your own Blob flies … check out our blobs here! 🙂

Thank you very much for taking the time to read this article. I hope you’ve picked up a thing or two that can increase your success with the booby fly on the water. Although I am no expert, time on the water with these patterns has proven that they are worthy of our respect, and taught me that sometimes you need to think outside of the box!

Fly tying and fly fishing fanatic! Was introduced to the sport a few years ago and haven't looked back! I luv this stuff! Check out some of my ties on the flyguys youtube channel: https://www.youtube.com/bcflyguys
View all posts by Brandyn →
This entry was posted in Fishing, Still Water Fly Fishing. Bookmark the permalink.

One Response to Fly Fishing the Booby Fly