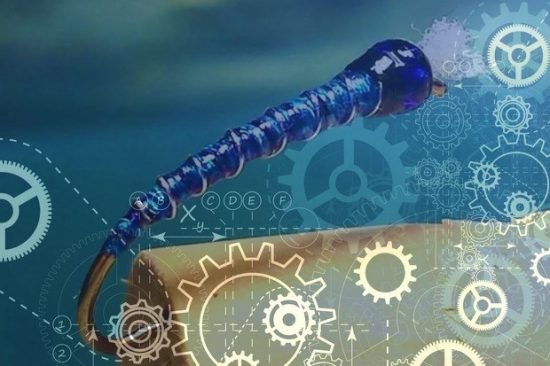 Reflecting back on the highlights of our recently completed  2018 Introduction to Chironomid Fly Fishing seminar, I noted participant interest in the chironmid pupa fly tying tips section of the course. Brandyn must of caught it as well because before I even mentioned it to him he had already pumped out three videos focused on tips & tricks for tying the cone, gilled and buzzer style chironomid pupae flies. It was settled then, and with spring and ice off on the horizon the timing couldn’t be better for a chironomid pupa fly tying tips article. 😉

If you’re new to fly tying pay attention as these chironomid pupa fly tying tips are sure to flatten your learning curve to tying effective chronie fly patterns. And even if you are a seasoned fly tier, check it out anyway; who knows there just might be something in it that you’ve never thought of before, or perhaps you could contribute to the tips provided in this article by adding your own chironomid pupa fly tying tips for us in the comments section at the end of the post. 😉 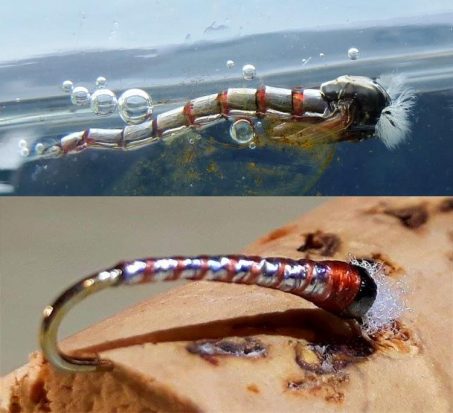 Regardless of the chironomid pupa fly style that you are tying, the application of these common concepts should assist to achieve a fairly proportionally accurate imitation.  Specifically, each of the three chironomid pupa fly pattern styles also have their own individual tips & tricks which can further assist to make the offerings more appealing to trout. We will go through each style one by one …

The ice cream cone style chironomid pupa fly is probably the simplest version of the pupa fly to tie. In this version a white bead is used to represent the white gills of the natural and the body is tied in behind it.

Common thought pattern around when to use a white bead over a black bead with added gill is 1) when visibility is impaired (mukey water lakes) and 2) when suspended particle in the water clog up fiber gills. Having said that there are certainly those that use them exclusively with great success. Having a few of each in the tickle trunk is always a good idea!

In the Bead & Gill version of the chironomid pupa fly, a white material, typically a fiber of some sort, is used to represent the natural gills. This material is usually positioned above a brass bead of varying colours, most commonly black.

Bead & gill chironomid pupa flies are typically chosen when fly fishing clear water lakes. The theory is that, as visibility is good, fish are better able to observe detail and therefore the more natural in appearance the imitation the more success it should have. Again,  although this might be the case most of the time there will certainly be days when ice cream cone cronies outperform bead & gill style flies in clear water lakes so a diverse  inventory is recommended!

The more traditional buzzer style chironomid pupa fly omits the bead in favour of thread or other materials to represent the thorax and gills of the natural.

Recently gaining more and more traction the Buzzer style chironomid pupa fly, due to it’s strikingly realistic properties, is thought to be the front runner when the trout are being extremely fussy. As this is a new phenomenon, for us anyway, it’s hard to believe that the extra little detail could really make that much of a difference,  but I would hate to the guy on the water without one on the day when the trout decide to prove me wrong!

There you have it folks, some common and style specific chironomid pupa fly tying tips for the ice cream cone, bead & gill and traditional buzzer cronie fly patterns. Will these little tricks and tweaks always make a difference? Most probably not. But when the fish are being picky they just might make all the difference in the world!

... flyguys chief webhead, when not fishing ;)
View all posts by BCFlyguys →
This entry was posted in Fly Patterns, Series, Still Water Fly Fishing. Bookmark the permalink.