I have heard a lot of talk over the past couple of years regarding the “water fleas” that seem to be on an increasing number of fish in Red Lake BC (Region 3). I personally have not come across this parasite in any other BC lakes, but it would only make sense that it would not be specific to just Red Lake. I will definitely be keeping a sharper eye out when on my fishing travels throughout this great area of BC just to satisfy my curiosity.

The “water flea” issue caught my ear because I have noticed these small black “poppy seed” type bumps on a larger percentage of the the brook trout I’ve been catching at that lake. It may be just my personal experience, but I am not noticing the spots on the rainbow trout I have caught, but again it would only make sense that it wouldn’t be specific to just brookies. Again I will have to keep my eyes peeled.

With the popularity of Red Lake as an ice fishing destination there has been more than a little bit of attention on this topic this winter as people catch infested fish. Rather than speculate on what the condition was, I thought I’d do some learning, and in the process  stumbled upon a great article written by Gord Pyzer.

Known in fishing circles as Doctor Pyzer; Gord worked for 30 years as a senior manager with Ontario’s Ministry of Natural Resources before devoting all his energies to fishing. For this article I have quoted much of his knowledge found in a “Canadian Outdoors” magazine story that he wrote for that publication. 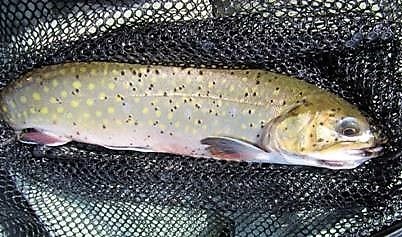 Turns out the condition, which we have been referring to as “water flea” infestation is in fact called “Black Spot disease” and involves a parasite that goes through an interesting and complex life cycle before it ends up on a fish. One interesting thing about the life cycle of this parasite is its dependency on snails as a temporary host. I have also notice more of the fish I’m catching at Red Lake have snails in their stomach. Is there a possible increase in snail populations in the lake that is contributing to this possible increase in the Black Spot presence? I cannot say. But it does seem to me the fish are finding the snails in the lake to be an easy food source which are appearing in more of the fish I’ve caught. There is also a need for predation of the fish by birds, which is also an unknown for me as I seldom see fish taken by predator birds while I’m on the lake. Loons would seem to be the main culprit in this stage of the life cycle.

Dr. Pyzer sums it up nicley as follows …….

Well, it is called Black Spot disease, how’s that for an obvious name, and it is actually not so strange. In fact, black spot (or Neascus) is very common in fish in many lakes, rivers, pits and ponds across the continent.

And its life cycle is fascinating.

The black spots that you can see, and feel if you rub your hand over them, are small cysts in the fish’s skin. In a heavily infected fish you’ll find them sprinkled in the flesh as well. And speaking from experience, if you inadvertently happen to eat one, they’re crunchy – like a speck of sand or a piece of pepper corn.

Now, we won’t get into a debate about what came first, the chicken or the egg, but what happens is that a fish-eating bird like an eagle, osprey, great blue heron, kingfisher, gull or cormorant consumes an infected fish and the black spots, which are, in fact, tiny encapsulated worms called trematodes, mature inside the bird’s digestive system.

Once they mature, the worms lay eggs which the bird passes into the water in its droppings. The eggs then hatch into microscopic organisms called miracidia that usually have only about 24 hours in which to swim around and find their next host that is typically a snail.

Once the miracidia worm find their way into the snail, the parasite develops into its next life form, emerging from the snail as a tiny creature called a cercariae, that swims around in the water looking for a fish in which to infect. When the parasite successfully burrows into the fish the fish reacts by encrusting the little bugger in a cyst with black pigmented melanin, which is the black spot that we can see and feel.

The black spot can survive in the fish’s flesh and skin, almost as though it is lying dormant, for many years, while it waits for the fish to be eaten by a bird, so that the process can repeat itself once again.

I suspect the reason the larger brook trout you may have caught are so heavily infected, is likely because they are large enough not to be easily targeted and eaten by too many birds. So, over time, more and more cercariae have worked their way under the fishes’ skin.

I should mention, too, that the literature suggests that the parasites that cause black spot has no affect on the fish they infect nor any humans that may eat them. Although the obvious appearance on the skin of the infected fish is a black spot, a small crunchy presence in the flesh of the fish is what you will discover if you consume one of these cysts. Not very appetizing…but not harmful.

... fish, fillet, smoke em up, repeat!
View all posts by Joe →
This entry was posted in Fishing. Bookmark the permalink.