You are Here: Home >> Blog Posts >> Fishing >> Why Some Fish Taste Muddy

Why Some Fish Taste Muddy

Over the years, I have heard a lot of information and misinformation about why trout sometimes have a muddy taste. So I’ve done some research and can now give you the straight answers. 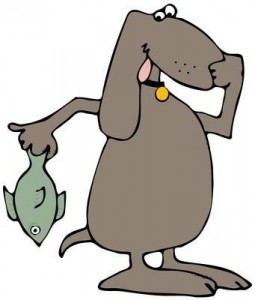 The muddy taste in trout (and other fish) comes from a chemical compound called “geosmin”. A variety of organisms produces geosmin, in both the terrestrial and aquatic environments. Geosmin is what gives soil that earthy smell and is what can sometimes give wine or beets that earthy taste. Apparently, the human nose is very sensitive to geosmin.

In our lakes, there are two primary producers of geosmin. These are the blue-green alga and the actinomyus bacteria that decompose organic material on the lake bottom. The algae and bacteria release the geosmin into the water. As a trout breaths, it acquires geosmin through the gills where it is transferred into the bloodstream of the trout and then deposited into the skin and dark muscle tissue.

Geosmin and muddy tasting fish is more of a problem during the hot summer months and seems to diminish as water temperatures cool down. Muddy tasting fish are not likely to occur in oligatrophic or mesotrophic lakes which are relatively deep and low in organic matter. The problem is primarily a problem in eutrophic lakes that are high in organic matter. In addition,  lakes with a high degree of clay or loam soils are more likely to produce muddy tasting fish.  When clay particles are suspended in water, they act as an absorbent of geosmin that is easily passed along to the gills of the fish.

The bottom line is that we can’t predict which lakes will have muddy tasting fish. Two lakes with the same degree of an algae bloom, for example, may not produce the same results in fish taste. And for that matter, we can get two fish from the same lake with one being muddy tasting and the other not? It may be just a matter of what micro-habitat each fish frequents.

Muddy Tasting Fish | What you can do about it …

Fish farms sometimes have a problem with geosmin and muddy tasting fish. They place the fish in clean, clear water for about a week. That is about all it takes to clear up the problem. So if you want to be assured of good tasting trout, only keep those you catch out of clean, clear lakes.