I spend as much time fishing as I possibly can. Although I release a fair amount of my catch, a significant portion of my fishing is for the purposes of putting food on the table. This is particularly true with fishing for salmon and bottom-fish. All my preferred methods of preparation invariably involve boneless fillets, and in that regard, a great fillet knife is of paramount importance.

I’m also always on the look out for high quality local products at a fair price. The reason for a desire towards “high quality” and “fair price” are self explanatory. The local appeal, especially in today’s global market,  is not because of any bias against manufactures from outlying areas, but because local knowledge typically results in a product better suited for local needs. So when I came across North Arm Knives, with their tag line “High Grade Knives Designed & Made in British Columbia”, I immediately dug in to find out more about them.

North Arm Knives is a  Father/Son team (John & Mike) located in the Burnaby British Columbia. They manufacture, from scratch (raw materials), a range of high grade knives including Kitchen, Outdoor and Every Day Carry (EDC) applications. For my needs, based on the size of the the trout we typically fish for here in the beautiful British Columbia Interior, with the odd salmon thrown in for good measure, their Kermode 6″ Fillet Knife seemed the right choice. So that was that … knife ordered, received, trialed, and here’s what I learned ……. 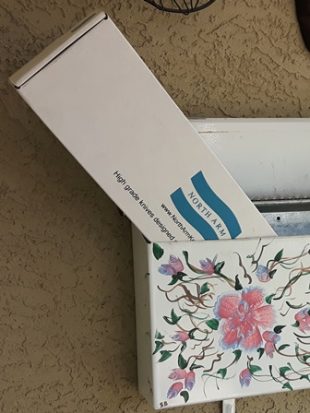 Website: The initial ordering process began with a scouring of the North Arm website to get a better understanding of the company, their philosophy, and ultimately their products. Their website is clean, quick and simple … a positive point in my opinion as it is very easy to navigate and quickly find what you are looking for.

Communication: Step two of the ordering process was to make use of the contact info found on the website and shoot them an email with a few questions. Email sent after business hours day 1; Reply received by the end of the business day 2. Communication continued through a few more emails with prompt replies, answers to my questions and knowledgeable recommendations as to the product that would best fit my needs … in this case the 6″ Fillet Knife over the 9″ based on the size of the fish that it would be mostly used on.

Shipping: The North Arm Kermode Fillet Knife was officially ordered on May 29 & arrived safe and sound via Canada Post On June 5 … 5 business days, not too shabby! Packaging was a strong cardboard box made to fit the item with lots of padding on the inside to compensate for any Canada Post hiccoughs that might occur along the way. Inside the box, in addition to the fillet knife and sheath, was information on the knife itself and the company. 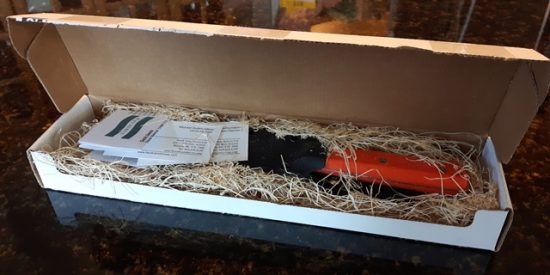 All in all I was very satisfied with service offered from North Arm Knifes from the beginning of the ordering process right through to it’s safe arrival on our doorstep a few days later.

Handle/Grip: The fillet knife can be ordered with a handle made from one of two options: Carbon Fiber or G10.

The standard handle material, called “G10” is a fiberglass/epoxy resin laminate and is available in black or hunter orange. The handle on my knife is hunter orange, and I am a huge proponent of high visibility tools for field use. Regardless of color, the handle feels great in the hand. The texture is neither smooth enough that one might risk the knife slipping out of grip, nor is it deep enough that blood and other nasties are impossible to get out of the crevices. After 2 years of frequent use the handle on my knife remains flawless. Having watched the company’s “torture test” video, I’m hardly surprised. It doesn’t look like any level of routine-type use could put a mark in this material. The twill-woven carbon fiber handle is about 25% lighter than the G10 and apparently equally as rugged. Both materials are impervious to water and therefor unable to absorb and harbor food-borne pathogens like some woods and foams.

Sheath: The sheath for this knife is made of a thermoplastic called KYDEX®. Initially, I thought it would be nice to have high quality leather sheath for such a nice knife. Upon further consideration, I’m sure the choice of material was no mistake. Also impervious, the plastic won’t absorb water, which would promote growth of micro-organisms, result in odour and potentially have implications on food safety. The precision-formed sheath accommodates the knife very securely (even upside down) and is waterproof and stain/chemical resistant. It also comes with your choice of a standard or elongated belt loop. 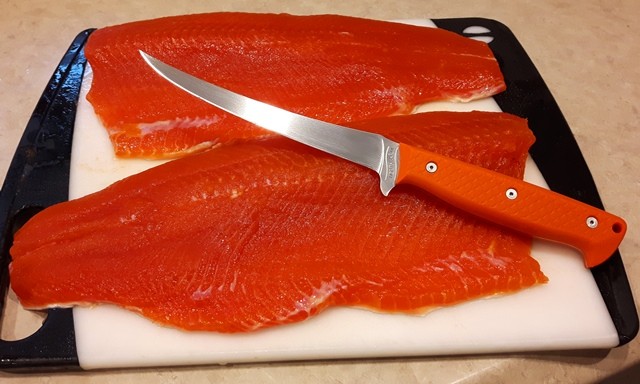 Blade: In the world of fillet knives, the blade characteristics are really the heart and soul of the knife, with the defining characteristic of a quality knife being how well the blade holds a sharp edge, and stands up in general. I purposefully held off writing the review until my knife had ample mileage on it, as longevity should be weighted heavily in the search for a “keeper” fillet knife. After 2+ years, several salmon seasons, and carving fillets off a half dozen large-spined species of fish, I can report that this knife holds a blade like no other fillet knife I’ve used. The blades are produced from a modern-production stainless steel called CPM® S35VN™. Without getting into the details, I can tell you that any quick amount of online searching will reveal that it is widely regarded as the finest knife steel on the market today, especially for edge retention. With a hardness rating of 60 HRC, I can see why the edge stayed sharp even with no maintenance.

The 6” blade reaches well, even into larger fish, and the sharp point and edge make detail work easy, even on the deep end of a hali fillet. North Arm does make a 9” version for those who like a long blade, but I find the maneuverability of the smaller blade a great feature. I personally like a bit of flex in my blade when I’m removing skin. It’s noteworthy that a strong blade that holds an edge well probably isn’t as likely to flex as much as it’s softer metal counterparts. I’d say that assessment is accurate in this case.

Warranty: Over and above a lifetime warranty against defects in materials or workmanship for the original purchaser, North Arm Knives carry a 30 day satisfaction guarantee where you can ship the knife back to them if the product does not meet your expectations during that time, for any reason, and they’ll refund the original purchase price (minus the original shipping charges).

So, you’ve read a lot of raving about this knife now; It’s a very nice tool!  The knife (with my handle option) retails at $155 CAD, with a flat rate of $25 CAD if shipped. That is certainly above the average retail of fillet knives available today, but quite competitive with those of similar build. I’d say that if you are the kind of user who fillets a few fish here or there, this knife may be punching above your weight class (unless you just want a damn fine knife). But if you’re the kind of user who likes the idea of one knife that will endure all the rigors thrown at it, that will likely outlive four $30-40 knives of equal cumulative value, and who who’d rather be fishing, visiting with friends, taking in scenery, and just generally soaking in vacation time instead of sharpening a knife edge that won’t last a chinook salmon, then this is your keeper!

You can find the North Arm Kermode 6″ Fillet Knife here ……. 🙂

When Ben Sampogna isn't fishing, he's trying to drag his friends or two daughters out fishing. When he has no more vacation time, he's at work in the Natural Resource Management field, thinking about fishing. He is passionate about the outdoors and enjoys various writing endeavors related to his recreating ... when he is not fishing.
View all posts by Benny S →
This entry was posted in Product Reviews and tagged fillet knife, fillet knife review, kermode, knife, north arm, Review. Bookmark the permalink.