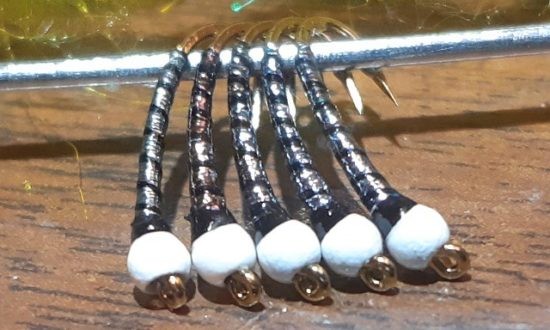 So as most of you are aware, the original blue steel/gunmetal flashabou #6916 has been discontinued for some time now. Since then it has been an ongoing debate among fly tyers as to what is the most suitable replacement. New products have hit the market and there are now many close representatives. We have seen everything from actual tying materials, to the inside of granola bar wrappers and chip bags! So we decided that it was about time to get to the bottom of it all with a Gun Metal Shoot Out!
The process began by comparing the very wide range of potential fly body materials and then narrowing them all down to a final top five. We then tied up five of the same fly pattern using the top five finalist body materials and put them out on our social media pages to let all you fly fisherman and women help us decide which matched the look of the original flashabou 6916 best. Thank you very much for your participation! The results were as follows … 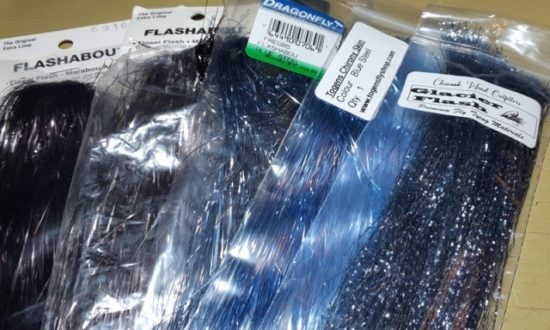 The five “gun metal” fly tying body materials that made the cut for testing include: 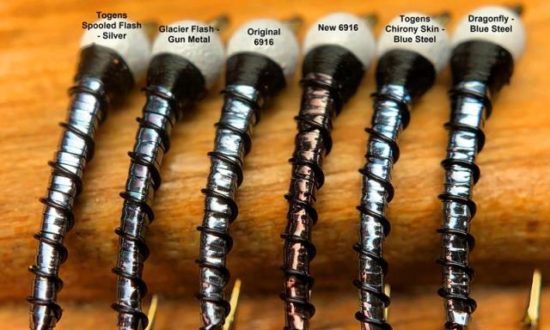 * It is important to note that the differences in all of these materials are very subtle and most likely of little concern to fish. They will absolutely all catch fish … and in fact we have been successful with them all! But being the obsessed fly fishers that we are, and with ice off just around the corner and fly fishing on our brain 99% of the time, we needed to do something to scratch the itch and thought it would be interesting to add a bit more food for thought to the ongoing gun metal debate 😉

In fifth place, meaning it was viewed by most to be the furthest from the look of the original 6916, is surprisingly the new 6916 gun metal/blue steel flashabou. You might think this would be the one that should be the closest as its labelled with the same name and same number, and comes from the same company as the original, but it is actually the least best representation of all materials tested. As an effective chironomid body material however, we have fished this product with success over the last couple years and it definitely deserves a place in the fly box … but as a replacement for the look of the original 6916 it is far too dark/bronze to even be considered.

Coming in at the number four spot was the Gun metal Glacier Flash from Chinook Wind Outfitters. This is a beauty material that we will definitely continue to use for cronies this year as it takes on an awesome shiny grey color that is only slightly noticeably darker and more grey then the others tested. The other great quality about this material is it’s long strands allowing for more flies to be tied with one piece of material. It also comes with a very thin thread like strip attached to each piece, which is easily removed to tie standard smooth gun metal cronies, but can also be left in place to create a very interesting mottled effect. This product comes in a huge range of colours, all of them worthy of there place on the fly tying bench!

In third place is Togen’s Spooled flash in silver. This is a super thin and shiny material that is very easy to tie with. The spooled flash is about the same size as flashabou but it comes on a spool as opposed to a cape. This allows for application from a bobbin, which we sometimes prefer, as well as makes for neat and easy storage. As a replacement for the original 6916 however, the Togens Spooled Flash is a close match but takes on a little more silver and omits the greyish blue tones needed to top the charts. Again a great product, available in a myriad of colours, and something that should not be overlooked by fly tyers.

* The next two materials ranked very closely to each other and either could have taken top spot in this shoot out. However, given the fact that we could no longer find a source for one of them we placed it in the runner up position …

The Dragonfly Blue Steel flashabou ranked very close to the original 6916, but as mentioned we could not find a source for it. Being that dragonfly products were quite popular, and that therefore many of you may have still have a swath of it laying around, we decided to include it in the survey. If anyone reading this knows of or discovers a source please share it in the comment section below. 😉

The final material, and coming in at the number one spot as the closest look to the original flashabou 6916, is the Togens Chirony Skin in Blue Steel. This is an absolutely fantastic product to tie with AND it is readily available at Togens Fly Shop. It is also available in many other colours suited to help imitate our local stillwater insects. If you haven’t tried this stuff we highly recommended it.

Gun Metal Shoot Out | Wrap up …

This was a fun and interesting shoot out and we’d like to thank all of you that helped us with the ranking by casting your votes via our facebook and Instagram pages! Who would have thought the replacement 6919 would be the furthest from the original? And is the discontinued Dragonfly Blue Steel the same as the newer Togens Blue Steel? Either way, between them all you really can’t go wrong so pick your favourite and get tying!