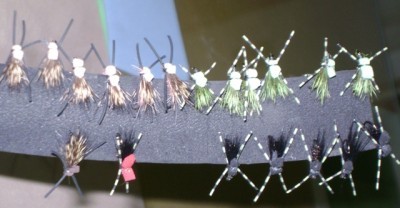 July 1 stream fishing time. Still working (27 shifts down 11 to go) Can’t fish but I can still tie. I’m preparing for a twist-off trip up the Alaska Hyw. and into the East Slope Rockies. Been tying some big Double Bunnies and Mice patterns for the Bull Trout and lots of Copper Johns in greens and black for Whitefish, rainbows and Grayling. Now it’s time for some dry’s. Was going to go with my normal Elk Hair Caddis in various colours and sizes and some foam beetles. That was until I came across a hybrid of both and after tying some I’m convinced it will be my go to dry fly. The fly is called an Arizona Mini-hopper. The creator of this fly is Ben Smith and I found it on his site Arizona Wanderings. It’s a modification of Roman Moser’s Balloon Caddis. The one I’ll be describing is a black Mini-hopper which could represent a small black caddis, a beetle or an ant. I’ve also tied a bunch in green ,tan and brown. This primarily a stream dry fly but I’m sure it would work on B.C.’s still waters too! It’s an easy tie and unsinkable which get’s it bonus points right off the hop.

I’ll report back in a couple of weeks to let you know how they worked.