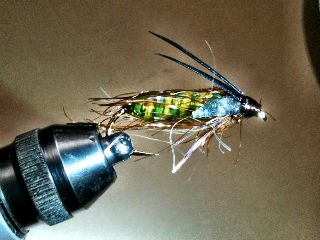 I’d recently seen an article about Clear Goo and its uses so I ordered in the light kit with thick, thin and Hydros Goo. My intention was to use it to tie minnow patterns but once I had the stuff at the tying bench I started messing around with it on bait fish and other fly patterns. I started to think of what bugs in life have a translucent or transparent body and the first image that popped into my head was the big Traveler Sedge pupa so famous in British Columbia. Hmm, a translucent clear goo caddis pupa … now this could get interesting! 😉

Fishing a Caddis pupa when a hatch is close or starting is a great way to tie into a bunch of fish. Over the years I’ve tried lots of patterns settling finally on Brian Chan’s caddis pupa because it worked the best of the bunch and I saw no reason to switch to anything else! But this kit got me thinking that when the fish is coming in from below and the insect is back lit against the surface light that translucent effect has to be a trigger … this is what Gary LaFontaine captured in his Sparkle pupa. So I decided to try and get this effect with the Goo.

I first tried applying the Goo over various bodies with not much success. In fact they were plain ugly and had no translucency. After looking at a lot of caddis pictures I finally tried the the Nymphglass and LarvaLace combo and was happy with the look. The Nymphglass with one side round and the other side flat gave a real nice segmented body and the LarvaLace pulled tight lay flat and gave a distinct rib. Smothered in Goo it seem to come alive! 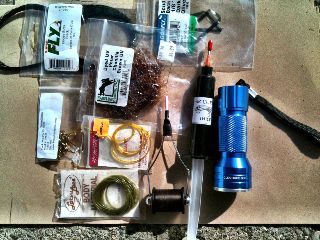 I haven’t tried the clear goo caddis pupa fly yet but I’ll have a selection ready for this summer when a hatch is happening. They’ll been in my box right next to the Chan Caddis just in case but I think I’ll be pleasantly surprised!