This report starts at this very pretty 2000 ish foot elevation little gem where the fish were keying in on the tiny pale green chironomid pupae that were hatching off in the low 40 degree water column. And when you couldn’t hook them on chironomids you could catch them in the shallows with a micro leech! Although we didn’t get into any monsters, the fishing was steady and the fish were feisty and appeared to be in great shape! We could have chosen a worse way to spend a gorgeous Friday and it was nice to see that the chironomids have started hatching at this level! 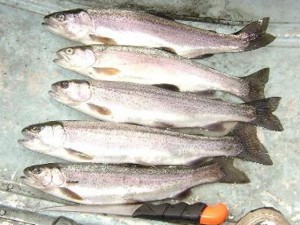 A Feast of Bows!

And while we were busy there, JFM put a 2500 ish foot elevation Kamloops area lake to the test and caught a few nice ones fishing BIG brown marabou leeches down deep! Nice work JFM! The water temperature here was also in the low 40’s, the water was murky and there were some small black and green chironomids coming off but fishing the deep leech was more productive. The action was fairly steady with about 15 fish being caught within a few hours. Again, it was nice to see that chironomids have started hatching at this elevation!

Word is that salmon Arm’s White lake has been fishing fast and furious all week long on chironomid pupae with fish to 3 pounds! At around 1500 feet in elevation it’s about time!!! The majority of the action has been focused but not limited to the North side of the lake. Yesterday, however, the water muddied up a bit and the fishing slowed down. Not sure if it has anything to do with turn over, as at that elevation one would think it would be complete by now, but something is effecting the water and the fishing. Stay tuned as we have a source on the water and we’ll let you know as soon as we hear that things are back on track!

Finally Jocko lake, at 2900 ish feet elevation, is taking it’s sweet time completing its turn over and therefore the fishing has remained spotty. Even though not much is hatching yet, fish are being caught on size 16 – 12 chironomid pupae in black, brown and green as well as micro leeches in black and red. We have also heard of some success on caddis larvae in pale yellow and brown. For reference, see  our 2010 Gallery page and check out the pictures of the caddis larvae that we pumped from a BC interior lake fish last week.

It’s really starting to heat up now so get out, catch some fish and drop us a line with your stories and pictures!