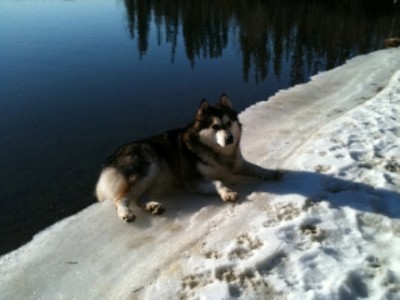 Cold snap is over and just a bad dream now. I’ve been using this warm spell to melt away the bad memories and continue my unheralded run of fishing the Peace River in the winter. I thought I’d change my method of attack and try some drift fishing.

I planned to drift some jigs but over the course of the day I tried quite a few things and had some luck with a steelhead staple … I caught  a nice size mountain whitefish drifting a bubble gum plastic worm?

... a little pig of a mountain whitefish!

I’m just starting to buy jig heads and tie onto them instead of using tails but I see some good fun creating baitfish on the jigs! 🙂

Lost a nice fish first thing but followed it up with an absolutely gorgeous Bull trout around 6 lbs.! 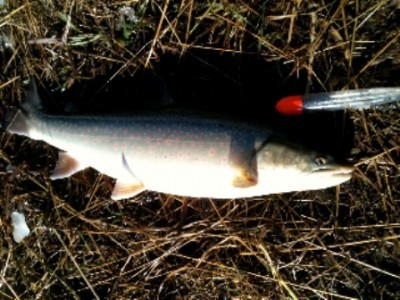 I had some more taps and caught another smaller Whitefish but it didn’t matter on a sunny day riverside with NO wind. With this weather it’s tempting to think that spring and ice off can’t be far away. I know in my case spring is coming but it can show up with attitude and usually does. My guess is in the North East  the lakes will be ice free at least a couple weeks before normal near the start of May. But I’ve been wrong before ……. lots.