Rumour spreadin’ round, that Northern town, ’bout the ice off on “THE” lake;
Just let me know, if you wanna go, to that spot before the QUAKE
It’s got alotta nice fish ahhhh ……. 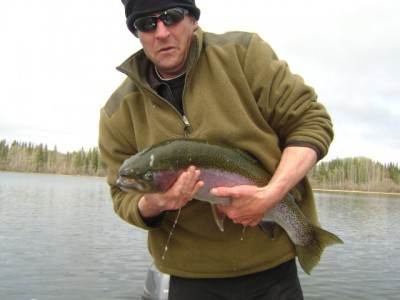 With apologies and all due respect to ZZ Top this was our situation. We had heard the ice had come off Sunday now the trick was to try and get a day off work! With a little begging, pleading and cajoling, Jason and I got the blessing from our team leader and prepared for a Thursday fish. He picked me up at 4:50 AM and we started our 2 hour journey to the lake. In the next week most of the lakes in this part of the world should be ice free except for Chunumun lake which evidently still has snow on the ice and three feet in the trees. Anyways got to the lake and sure enough ice off! 😀 The weather on the other hand wasn’t as predicted by The Weather Network the night before. So instead of mostly sunny and temps around 20 C it was just above freezing and dark, ugly clouds moved in.

Regardless, we shot across the lake to the shallows and anchored in 5′-6′ of water. The day started with Jason boating a 3 lb bow, but we saw big fish surfacing not far away so relocated and set up shop. We were both using indicators and bouncing between leeches and chironomids. The next fish, Jason again, slurped a leech and the fight was on. We caught glimpses of it every now and then and both thought it was around 7-8 lbs. As the fight got closer to the boat it became apparent that we had both underestimated this slab. When I finally got the head and half the fish in the net I went to stand and lift it in the boat but almost tipped over the side. Heavy fish! The true measure of the fish can be seen in the photo when it flips a little sideways and you can see it’s 5-6 inches across the back. Our guess, since we didn’t measure it, was that it was around 15 lbs. 😯

I hooked a nice one next but lost it by the boat. From here on in I was pretty much schooled by Jason as he caught two more rainbows over 10lbs and a 4-5 Brookie. 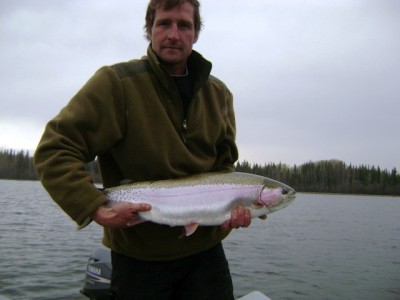 ... what a slab rainbow trout! 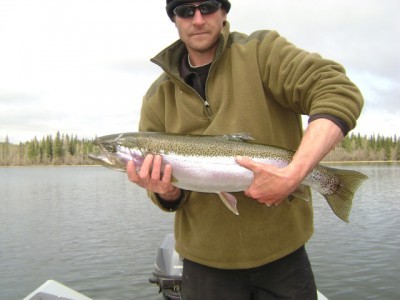 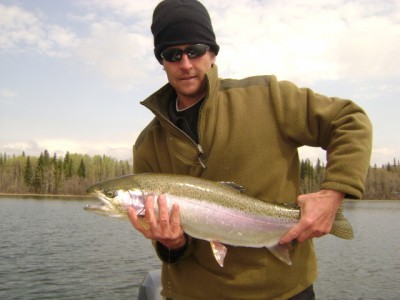 As you can see it was one of those days where it was obvious that my job was to net fish and take pictures. Hey no problem when you’re dealing with fish this size.

There were size 10 -12 chironomids coming off and Jason had good luck with a chironomid pattern he calls lead and red. Although we stayed until 5:00 PM and weathered a bunch of rain squalls all the fish hooked were before noon which is normal for this lake. I don’t know if we’ve used all our get out of jail free cards at work but if we can pull it off we’ll try and get another shot at these monsters before they leave the shallows and slink in the the depths. 😉

Fly fishing the great white north! I mainly fish the lakes, rivers and streams of North Eastern B.C. for Rainbows, Lakers, Brookies, Bulltrout and Grayling.
View all posts by Gord →
This entry was posted in Fishing Reports and tagged 2011 Fishing Reports, Fly Fishing for Monster Rainbows, Northern BC Fishing Report. Bookmark the permalink.