You are Here: Home >> Blog Posts >> Fishing Reports >> The Making of a Fishing God

The Making of a Fishing God 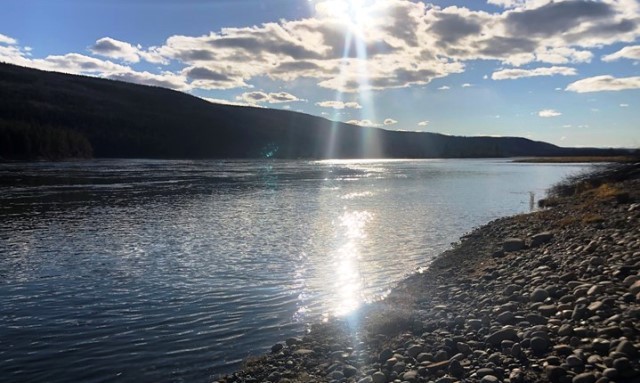 The Making of a Fishing God

First off let me introduce my new fishing God … Grizzly. 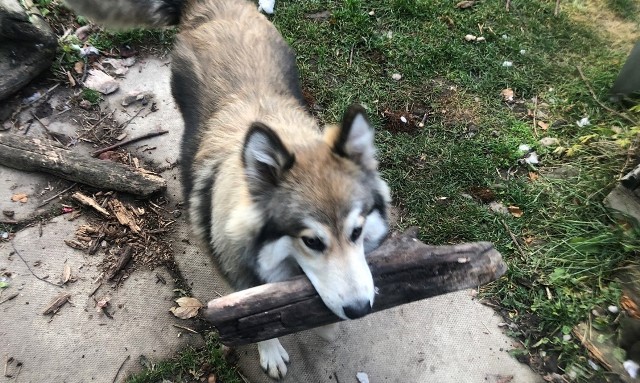 This summer I had to put down my 13-year-old giant Alaskan Malamute and it left a huge hole in my wife and my life. Weeks later, as life sometimes does, I was thrown a life line and an opportunity to pick up a pup. 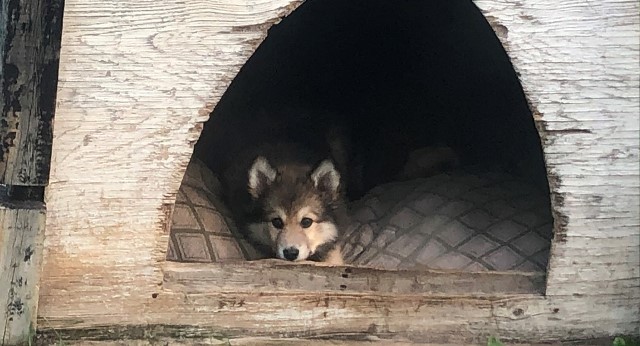 We got her at 8 weeks and immediately our lives were up lifted with this high energy vixen. She’s a Malamute/Wolf and I was totally prepared for what was to follow as she’s the third Mal/wolf I have owned. A whirl wind of fur that demands to be part of the family. With the heat of the summer she was introduced to water early when I got a kiddie pool and had it full of water all summer.

Fast forward to the fall and 2 weeks before Halloween I take the boat out on the river for one last run and then tarp it in for the winter. 40 years living in the north and I’ve only seen about 3 Halloweens where there wasn’t snow. I’ll wait until next spring to do some boat training but for now with the weather pretty decent it was time for her first fishing trip. At 6 months old and 65 lbs. she is a bit of loose canon in the jeep but she behaved which was a nice surprise. 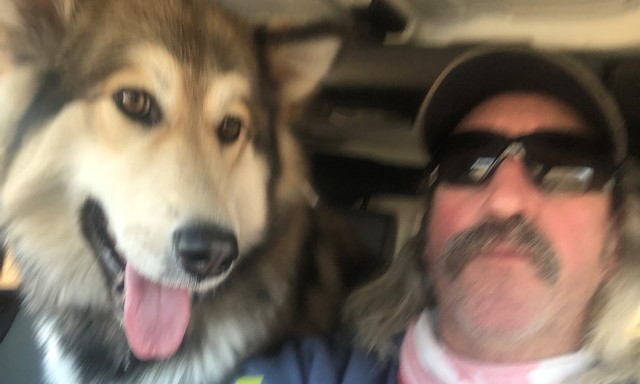 We drove then hiked into a nice hole on the Peace River just upstream from a tributary. The plan was to hunt for some Bull trout as they were just starting to fall back into the Peace after being up spawning in their natal streams. Grizzly was very excited to be off a leash and free roaming. Being young she contained her explorations to 200 yards up and down the shoreline from where I set up shop. From past experiences I know as she gets older she will expand her roaming area and will disappear for 20 minutes at a time coming back to make sure I haven’t left. I remember fishing in the same spot years ago with second Mal/wolf Kai when I heard a ruckus above me. All of a sudden, over the edge of the 20’ bluff behind me comes Kai pulling a full deer hide. Right away the stench hit me and I thought nope. He started chewing on it proud as can be and it was epic struggle to get it away from him. I had waders on so I drug it out into the current and held it there until it started to sink then let go. Of course, the whole time Kai was out swimming around trying to grab it.

At this point I’ll mention that Grizzly’s favorite things are sticks and roots. She has lots of toys but prefers the wood to the point where she is pruning the dead branches on the 40’ spruce surrounding our backyard. As I set up to start fishing she was in her glory as they were logging off an island, for site C, about a kilometer upstream. There was a steady stream of branches and green boughs floating past us and she got her first swims wading too deep to try grab them. 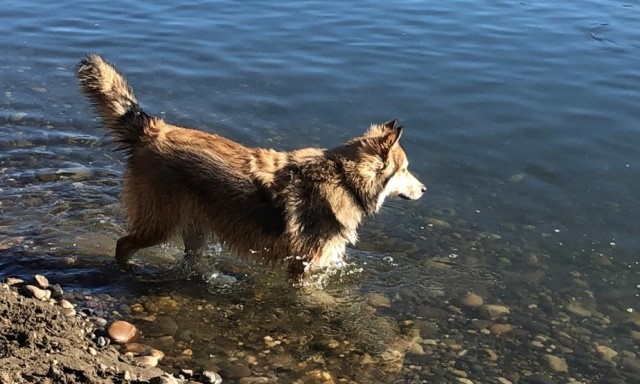 My plan for fishing was to bottom bounce some flies through the hole. The fly of choice was going to be a Flesh fly. After reading for the umpteenth time about fishing for Alaskan Rainbows with Flesh flies I got thinking. There are no Salmon runs in the Peace but with two dams there must be a quite a bit of sliced and diced fish going through the turbines. To me this sounds like Bull appetizers. I tie mine on size #4 SS salmon hooks with palmered rabbit over some wire for weight. On some I wrap one turn of white Marabou at the head. 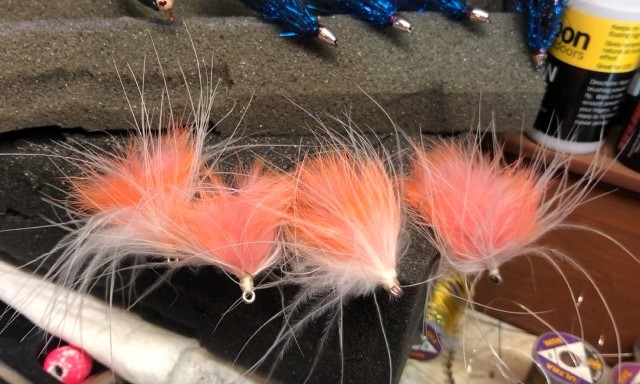 The setup with a casting rod is a three-way swivel with 21” leader to 2 pencil weights. On the other swivel I tie about 10” of leader to which I attach the fly. I lob the set-up stream and allow the current to bounce down stream keeping tension on the line. Once it stops I’ll leave it there for 5 minutes then repeat. My first fish nailed the fly in about 6” of water as I was reeling in to recast. It was about an 8” Bull trout and I quickly shook it off. The only other fish I hooked was a beauty. 28 inches of,” No I don’t want to come to shore”. Of course, it didn’t help any that when it did come near, out comes the God to have a look. 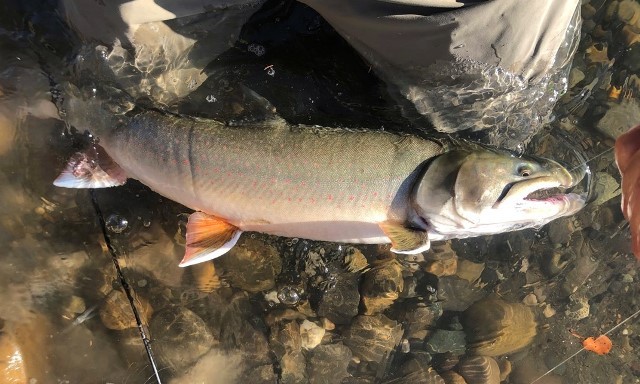 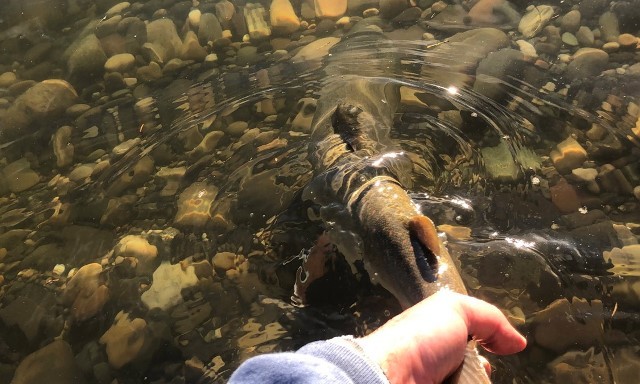 This cemented her fishing God status and the beginning of a, no doubt, an illustrious partnership. I know there are going to be some frustrating times but as I mention, with this being God number 4, I’m ready for anything!

Side note the next week she was heading in to get spayed so convincing her to get in the Jeep next fishing trip might be a bit of a chore. 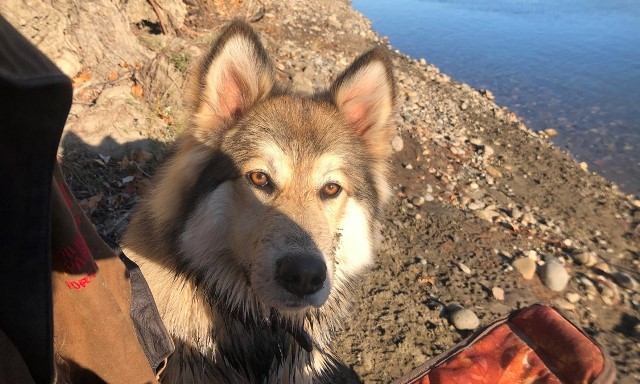