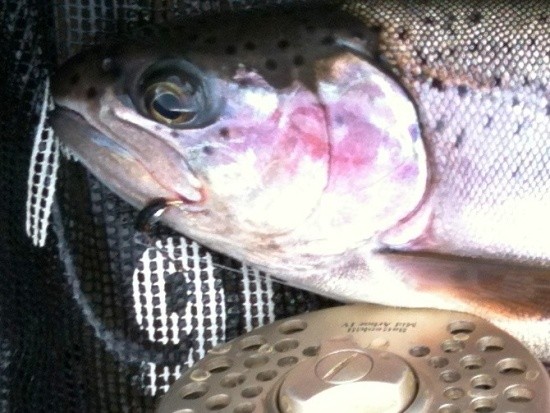 Well my last day of work before holidays actually ended up being an H2S course in town. I finished up early and that meant time to grab the boat and head out on the Peace for one last fish before heading south. As I was heading up river I saw a seam close to shore with fish rising all along it. I beached the boat and had a close look at what they might be going after. Little black caddis was the answer so on went a size 12 black elk hair caddis. These weren’t sipping rises but splashy hits and I was sure I was going to be into fish right away! So with that … here’s a late summer BC fishing report for ya! 🙂

Well nothing is SURE when it comes to fishing as we all know. I had fish nailing my fly but I wasn’t getting any hook-ups. I checked my fly several times to make sure everything was okay  but it continued fish hitting the fly end of story. I was beginning to think these rainbows must be far sighted when I finally hooked one. Turns out they weren’t rainbows but a large pod of whitefish. 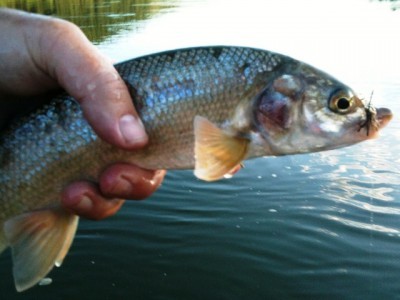 Now whitefish are easily caught with nymphs but a skittering caddis on a moving river is a different story. My theory is with their mouths underneath they almost have to do a barrel roll at the surface and lose sight of the bug. Anyways that’s how it went for the evening lots of rises with a 1 in 10 hook-up rate. Every now and then they stopped rising signaling the arrival of a bulltrout.  On a couple of these occasions I managed to catch one. One on a float/hootchie set-up and one on a green/white double bunny. A great evening with the only downside being the hordes of black hornets everywhere!

Steve had been in Alberta and Quebec for the better part of July so once he was done with his stint out at camp he headed out to fish some East slope Rockies streams. By all accounts( well actually only his but I believe him 😉 ) he was into lots of fish. No Bulls but lots of whitefish and grayling plus some rainbows. He reported that with last year’s deluge and this year’s spring heavy runoff that sections of the streams had relocated. Some of the good holes weren’t there anymore while other sections had braided out. Ah the ever changing course of mountain streams. Never the same each year. He said his most productive flies were a black flashabou back nymph down low and up top a green deer hair caddis. 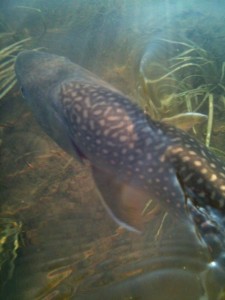 On holidays I hooked up with my buddy Don in Vernon and we headed up into the Monashee’s out of Lumby. We fished one of my favorite lakes up around 5000 feet. We both started with full type 6 sinklines as even this high up the fish were hugging the bottom. Don had one of his Red Bastard Dragon flies on and I started with a green sparkle leech. I was getting more hits than him but he was catching all the fish. Eventually I switched to various dragon flies finally finding one to rival his. # 10 was the size they wanted and they were really keying in on patterns with large eyes. The fly that started producing for me had a dark green body/gold ribbing, green goose bigots on either side and mottled green/black bead chain eyes. When the beer settled at the end of the day we had landed around thirty feisty rainbows ranging from 10” to 18”. Great day thanks Donny. 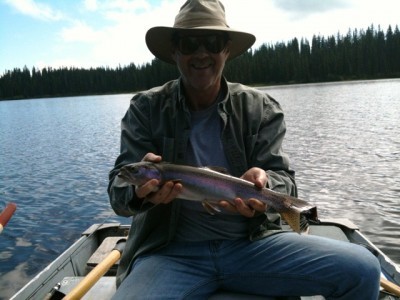 The following week found me in Kamloops and of course there is no shortage of lakes around town. With it hot and coming off a great fishing trip up high, I started scouting lakes with a bit of elevation. I didn’t bother the head office on this one and finally figured I’d try one of the lakes up by Sun Peaks. Elevation and not that far from town. I was hoping: A- I’d catch some fish and B- that they would fight as hard as the ones caught up in the Monashee’s. 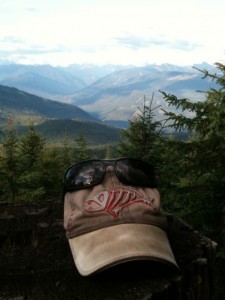 I headed out of Kamloops and was at the lake in just over an hour. The temp was 3C as I inflated my tube and strung some rods. It was sunny and warming up but I think they might have gotten a frost the night before. The lake was shallow for quite a ways out as I could see weeds and lily pads on the surface. Not knowing the depth or having any electronics I went with my intermediate camo line and 10 feet of 4lb leader. I started with the dragon that had worked so good at this elevation the week before. Working along the drop off I hooked and lost a few small fish. I was just happy that there were fish and they were biting. I changed to a green sparkle leech with sporadic results catching a 10 incher and losing a 12 incher at the tube. I got to thinking about the frost and switched to a boatman. This version is tied with an oblong chrome bead as the body with  brown nymph skin pulled over the back. The two rubber legs are tied facing forward and there is two, 1 inch strands of krystal flash, trailing from the butt. First cast..bang… nice fish which made a few runs before throwing the hook in a somersaulting jump. Well that got me sitting up a little higher in the tube! I had some good fun for the next hour before getting blown off the lake. Fish of the day was a fat 18 incher that fought like crazy and soaked me with a swish of its tail on release. These fish were real spunky and didn’t require much reviving with the water temps , I’m guessing, in the low 60’s.I wasn’t expecting a fish that size and it was an extra bonus for sure.

So there you go some great fishing trips through the Dog Days of August in the Thompson/ Okanagan. Now it’s back to reality and a month of graveyards.

Fly fishing the great white north! I mainly fish the lakes, rivers and streams of North Eastern B.C. for Rainbows, Lakers, Brookies, Bulltrout and Grayling.
View all posts by Gord →
This entry was posted in Fishing Reports and tagged 2012, BC Interior, Fishing Report, Flyguys North, Peace River. Bookmark the permalink.