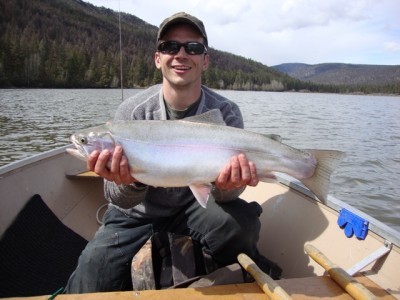 After fueling up on some nutritious food, and learning the difference between a McMuffin and a McGriddle, Rob and I hit the road for a beautiful day of fishing with no destination set!  After a lengthy dispute on our options a left turn was decided and we were off to a Region 3 lake close to 2500′.

Upon arrival we were delighted with what we were seeing!  One fisherman and dozens of swallows gorging on chironomids, what a treat! After rounding the lake and investigating the situation further we tried a few different tactics with leeches and chironies.  The day was filled with small hits and a few solid tugs but with no fish to show for it … so far!

A couple hours in I was into what I thought was a 2lb fish initially.  That 2lbs grew rapidly as he hit the surface and started rolling to show off his true size!  While thrashing around initially on the surface his attitude changed rapidly and,  after catching a glimpse of Rob,  😉 he kicked into over drive as he wanted nothing to do with us!  We thought the thrashing and weird movements might be due to being snagged or wrapped in the line but after a few minutes of battling we were delighted to see a beauty silver bullet slab of a Kamloops Rainbow trout in our net with a red polar chenille Leech hooked into his top lip!

The Pattern: (my first year tying and fishing with them) 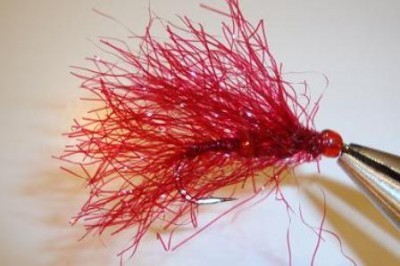 Upon Popular request I will be working on a step by step of the polar chenille leech very soon.  Very easy to tie and productive it seems so stay tuned!

Thanks to Rob for a great day of fishing!  Can’t wait to get out again (probably this afternoon!) 😀

One Response to R&R Land a Hog!